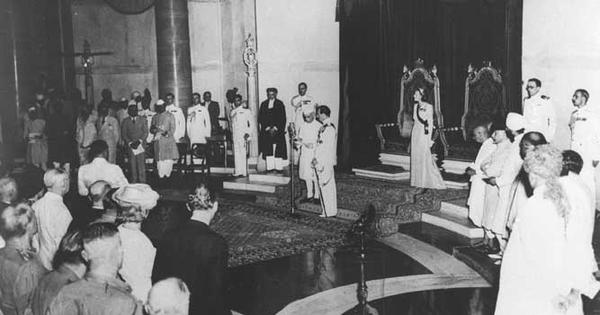 A British-Indian Treaty will be negotiated between the Constituent Assembly (our own use of the term here) and the United Kingdom to provide for certain matters arising out of the transfer of power. It was, however, hoped that India would decide to remain the member of Commonwealth. But at the same time; she would be given the right to go out of the Commonwealth, if she so desired.

(i) The short term plan of the Mission envisaged the immediate setting up of an Interim Government in order to carry on the administration while the constitution making was in progress. The Interim Government was to have 14 members – 6 Congressman, 5 Leaguers, I Indian Christian, 1 Sikh and 1 Parsee.

The Cabinet Mission Plan was an honest attempt on the part of the British Government to solve the Indian problem. It tried to satisfy the various political parties of India. To the Congress, it offered a United India; to the League, a de facto Pakistan and to the Princes a complete freedom of action. In the words of Wavell, “They offer to the Muslim community the right to direct their own essential interests, their religion, their education, their culture, their economic and other concerns…. To another great community, the Sikhs, they preserve the unity of their homeland, Punjab. They provide in the Special Committee, which forms a feature of constitution-making machinery, the best chance to the smaller minorities to make their needs known and secure protection for their interests. They offer to India the prospects of peace, a peace from party strife”.

Even Muhammad Ali Jinnah had to admit that there could be no fairer solution of the minority problem than that presented in the Cabinet Mission Plan. He told the Muslim League Council that the scheme presented by the Cabinet Mission was the maximum that he could secure. This was, obviously, a no mean merit of the Plan. The Mission was significant in so far as its members stated in clear and unambiguous terms that they could never recommend the partition of India and the formation of s separate, sovereign Pakistan. “Lord Pethick Lawrence and Stafford Cripps”, writes Maulana Azad, “said repeatedly that they could not see how a state like Pakistan envisaged by the Muslim League could be viable and stable”. Though Pakistan was ruled out in name by the Mission, it was definitely conceded by the plan in substance.

The territories included in the Muslim majority provinces in the north-west as well as in the north-east of India were exactly the same which the League had demanded for the formation of Pakistan. Besides, the provision that the provinces would have full autonomy under the scheme was obviously in the interests of the Muslim community. The procedure laid down for deciding a communal issue in the Constituent Assembly was an additional safeguard in favour of the Muslims. In short, the Plan tried to offer the essence of Pakistan without destroying the territorial integrity of India. And this was definitely a commendable feature of the Mission Plan.

Even the proposed Constituent Assembly also had some commendable features to its credit. It was to be constituted on the democratic basis in so far as each province was to be allotted a number of seats proportionally. The principle of weightage to the minorities was completely discarded to its population. Communal representation was reserved only for the Muslims and the Sikhs. No such concession was granted to the Anglo-Indians, Indian Christians and other numerous interests which were recognised by the Act of 1935 . Besides, all the members of the Constituent Assembly were required to be Indians. No non-Indian was to be included in it. There was also to be no interference with the work of the Constituent Assembly either from the British Government or from the officials.

The Assembly was to be sovereign within the framework of the scheme. The constitution framed by it was to be implemented by the British Government which was to take necessary steps to surrender their sovereignty over India. The Muslim League followed Jinnah’s advice and accepted the Plan “in as much as the basis and the foundation of Pakistan were inherent in the Mission Plan by virtue of the compulsory Grouping of six Muslim Provinces in Section B and C”. On June 26, 1946 the Congress Working Committee decided that “the Congress would join the proposed Constituent Assembly ‘with a view to framing the Constitution of a free, united and democratic India.” The Sikhs at first refused to send their representatives, but the assurances given by the Secretary of State and the Congress Working Committee led them to change their policy. Thus the three major communities, recognized by the Cabient Mission Plan, decided to work the Plan.

The election to the Constituent Assembly took place in July, 1946. Out of 210 general seats (for 11 Governors Provinces) the Congress captured 199. The remaining 11 seats were captured by the Unionist Party of Punjab (2) Communist Party (1), Anti-Congress Scheduled Cast Federation (2) and independent candidates (6). Out of 78 Muslim seats, the League captured 73 . The remaining 5 states were captured by the Congress (3), the Unionist Party of the Punjab (1) and the Krishak Praja Party of Bengal (1). The upshot of these elections was that in a House consisting of 296 Members, the Congress could count upon the allegiance of 212 and the League whip was accepted by 73 .

Of the remaining 11 members, not less than 6 members were likely to follow the Congress. The commanding position of the Congress, in the Constituent Assembly and the unfavourable attitude of the non-Muslims towards the League made Jinnah doubtful about his success in the Assembly. He was irritated to find that on the refusal of the Congress to accept the short term plan, Wavell was unwilling to form a Provisional Cabinet Government with the co-operation of the League alone. His indignation was also intensified by the statements of Cripps and Pethick Lawrence who had remarked that Jinnah had “no monopoly of Muslim appointments.” So on July 29 , the Muslim League withdrew its acceptance of the Cabinet Mission’s longrun plan and called for Direct Action to achieve Pakistan. Since the Congress ultimately accepted both the long term plan and the proposals for the Interim Government, the Viceroy on 14 August, 1946, invited Nehru to form interim Government at the Centre.

Jinnah, on the other hand, declared 16 August as the “Direct Action Day”, but did not make it clear what the programme would be. To the surprise of all, on that day a systematic killing and looting of the Hindus of Calcutta began and continued for four days. About 3000 people were killed and thousands worth of property was destroyed. Maulana Azad, who happened to be in Calcutta on that day, writes : “The 16th of August was a black day in the history of India. Unprecedented mob violence plunged the great city of Calcutta into an orgy of bloodshed, murder and terror. Hundreds of lives were lost. Thousands were injured and property worth crores of rupees destroyed. The city was in the grip of goondazs.”

The British owned Statesman of Calcutta pleaded the blame squarely on the League. On the appalling carnage and loss in the capital of a great province-we believe the worst communal riot in India’s history was a political demonstration by the Muslim League…. While the carnage continued in Calcutta, Noakhali, Bihar and other places, attempts to rope in the League at the Centre also went on. In this, Wavell played a leading part, for without the Leagueres in the Government he did not find himself in a comfortable position. The Viceroy held a series of conversations with Jinnah in which he persuaded him, to join the Government.

To worsen the situation, in December 1946, the League completely boycotted the Assembly in its first session. Their empty benches raised new problems. Communal disturbances were also on the increase. In a last bid to break the deadlock in the Interim Government, the British Prime Minister invited the leaders of the Sikhs, the Congress and the League to meet with him at London. Nehru represented the Congress, Baldev Singh the Sikhs, and Jinnah and Liaquat Ali, the League. The discussions at London could not prove fruitful.

Amidst these developments came the statement of the British Prime Minister, Attlee on February 20, 1947 that it was the definite intention of the British Government to “effect the transfer of power to responsible Indian hands by a date not later than June, 1948.” Mountbatten was announced as Wavell’s successor as the new Viceroy of India. He did his job well, handled the Indian situations/ problems with a skill which was simply admirable. After discussions with all the political parties and the leaders, Mountbatten got his plan accepted by the authorities in England. The Mountbatten Plan of June 3, 1947 which prepared the ground for India’s freedom (as also its partition) was as under:

(a) It declared that under the circumstances, the Partition of India was the only possible solution of the Indian problem.

(b) The three disputed provinces viz. Bengal, Assam and the Punjab would also to be partitioned.

(c) A referendum would be held in the N.W.F. Province to decide whether that province would like to join Pakistan or India.

(d) A referendum would be held in the district of Syllhat (In Assam) also to determine whether the district in question would like to remain a part of Assam or join East Bengal which would be a part of Pakistan.

(e) The Legislative Assemblies of the Punjab and Bengal were to decide whether these provinces should not be partitioned.

(f) The Plan also indicated a willingness to transfer power before the specified final date of June, 1948. This would be on a Dominion status basis and the successor or successors states(s) could decide through the Constituent Assembly or Assemblies whether or not to stay in the Commonwealth.

The Mountbatten Plan was accepted by the political parties of India and was soon put into operation. The Legislative Assemblies of the Punjab and Bengal decided in favour of the partitioning of their provinces which were divided into two parts: East Punjab and West Bengal remained the part of the Indian Union while West Punjab and East Bengal joined Pakistan. Syllhat was incorporated into East Bengal and referendum in N.W.F. Province decided in favour of Pakistan.