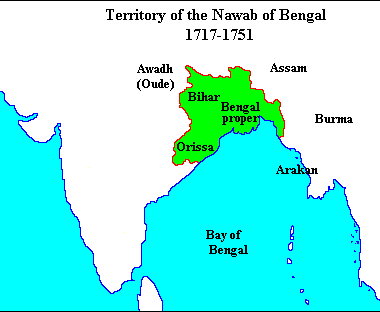 Bengal remained independent for a large part of the medieval period. Two important dynasties ruled over Bengal. These were the Ilyas Shahi Dynasty, from 1342 to 1414 and again from 1433 to 1486 and the Hussain Shahi Dynasty 1493-1539. After this, Bengal came into the hands of the Surs. In the year 1576, Akbar annexed Bengal into the Mughal Empire.

Most of the monuments were concentrated in the two capitals, Gaur and Pandua. Brick was used on a large scale in the monuments constructed here. Stone was used only occasionally. The decoration on the buildings was in terracotta.

The most famous monuments of medieval Bengal are the Adina Masjid at Pandua and the Dakhil Darwaza at Gaur. Some other structures are the Kotwali Darwaza, and the five masjids-Tantipara, Darasbari, Chamkatti, Chota Sona and Bara Sona.

Under Alauddin Hussain (1493-1519) also there was a tremendous growth of the language. He and his successor, Nusrat Shah, were great patrons of cultural activities. They encouraged Persian and Bengali literature and language. Many Sanskrit works were translated into Bangla at their court.

Many illustrated manuscripts from the Hussain Shahi period point towards the developments of visual arts. The paintings of Bengal bear strong resemblance to the contemporary Sultanate paintings, especially of the ‘Chaurapanchaika’ variety from Jaunpur.

Music prospered under the rulers of the Hussain Shahi Dynasty. Many musical traditions of the Sultanate period were continued by the rulers of Bengal.