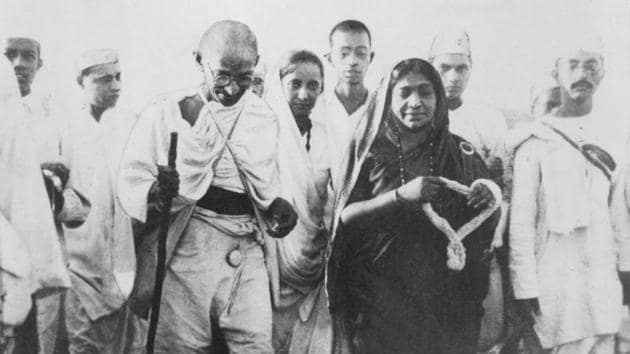 Though Mahatma Gandhi (1869-1948) returned to India in 1915 after having spent more than twenty years (1893-1914) in South Africa where he had fought and won the war against racialism through Satyagraha and non-violence, which means became the cardinal principles of his struggle throughout his life. Gandhi took up the leadership of the Indian National Congress after having launched successfully the Champaran (Bihar), the Ahmedabad and the Kheda Satyagrahas during 1917-18 (on Gokhale’s suggestion whom Gandhi had regarded his political guru, Gandhi travelled around the country to see for himself India’s people, their problems and the miserable conditions in which they lived), Gandhi came on to the political scene of the country and dominated and guided the Congress and its affairs for about thirty long years.

Though the period of Gandhi’s leadership of the Congress is usually known as the Gandhian era, there were the other forces such as those relating to the Muslim League, the Swarajists, the revolutionaries, Subhash Bose and his Indian National Army, the workers, the peasants, the communists, the hard-core nationalists, the Ambedkerites who had, in their varying ways, contributed to the developments during 1917-1947. The tale of our national movement was to unfold itself, now with its own peculiar characteristic features.

XIA. Communalism: The Muslim League and its Activities

The rise and evolution of the All-India Muslim League was the product of the British policy of “divide and rule” as also a reaction to the Hindu revivalism. Sir Syed Ahmad Khan (1817-1898), who was once a champion of the Hindu-Muslim unity, began suspecting the objective of the Indian National Congress. The foundation of M.A.O. College, with Beck as its principle, brought the Britishers and the Muslims closer to each other, paving the way for the Agha Khan’s Muslim deputation to give a memorandum for the Muslim’s separate representation to the Viceroy at Simla in October 1906.

The birth of the AllIndian Muslim League (with Wakar-ul-Mulk as its President) in December 1906 was the logical culmination of a political organization for purposes, as Maulana Azad stated, of

(a) strengthening and developing the feelings of the Muslim’s loyalty towards the British rulers, and

(b) safeguarding the Muslim interests/rights. The League demonstrated its approval of the partition of Bengal (1905), and welcomed the reforms of 1909.

(i) creating a sense of loyalty among the Muslim towards the British,

(iii) representing the aspirations and sentiments of the Muslims,

The Mont-ford reforms (The Government of India Act, 1919) saw the two organizations parting ways —— the distance went on widening which ended only in the partition of the country in 1947. The Congress, thereafter, could not overcome its policy of appeasement towards the League. As the Muslim League moved towards its communal stance, it came to disapprove all that the Congress did (the non-cooperation movement of 1920-22, the Swarajists’ demand for a commission to review the reforms of 1919) and supported what the British government proposed. M.A. Jinnah (1876-1948), one time a Congressman, had become the leader of the Muslim League, demanding separate representation for the Muslims in politics and services.

As against the Nehru report of 1928, he sought:

(2) Punjab and Bengal should have Muslim representation on the population basis for 10 years.

(3) Residuary powers should be vested in the Provincial Legislatures and not in the Centre.

Then came the Jinnah’s fourteen points which were :

(1) The form of the future constitution of India should be federal. The residuary power was to veste in the provinces and the states.

(2) A uniform measure of autonomy shall be granted to all provinces.

(3) All legislatures shall contain adequate representation of minorities without reducing the majority in any Province to a minority or even equality.

(4) In the Central Legislature, the Muslim representation shall be one-third.

(5) Re-presentation of communal groups shall continue to be means of separate electorates.

(6) Any territorial redistribution shall not affect the Muslim majority in Punjab, Bengal and North-West Frontier Province.

(7) Full religious liberty shall be guaranteed to all communities.

(8) No bill or resolution or any part thereof shall be passed in any legislature or any elected body if 3/4th  of all members of any community in that particular body oppose such a bill, resolution or part thereof on the ground that it would be injurious to be interests of that community.

(9) Sind should be separated from the Bombay Presidency.

(10) Reforms should be introduced in the N.W.F. Province and Baluchistan on the same footing as in other Provinces.

(11) Provision should be made in the constitution giving the Muslims an adequate share in all services and in all self-governing bodies.

(12) The constitution should embody adequate safeguards for the protection of Muslim culture, education, language, religion etc.

(13) No cabinet either central or provincial should be formed without there being a proportion of at least 1/3 Muslim Ministers.

(14) No change shall be made in the constitution of the Central Legislature except with the concurrence of the States constituting the Indian Federation.

The League’s lukewarm attitude towards the Congress’s ‘Purna Swaraj’ resolution of 1929 and Gandhi’s civil ‘disobedience movement of 1930-1934 did not make any ground for the two organizations together towards the Government of India Act 1935 which they had denounced, though on different reasons. The 1937-elections held under the Act 1935 and the subsequent Congress’s forming governments in a couple of provinces and its resignation in 1939 with the opening of the World War II made the League celebrate the day of deliverance. The League’s Lahore session of 1940 made the intentions of Jinnah (especially his two-nation theory) clear when the Pakistan resolution was passed. In all these developments, the British blessings towards the League’s ever-increasing demands helped the League to attain Pakistan.

During the war as also in years following 1945, Jinnah and the League (with riots in the name of direct action) persistently adopted an un-compromising attitude towards any and every scheme for solving the Indian problem. So much so, even the Cabinet Mission Plan (1946) which offered Jinnah a de facto Pakistan could not satisfy his ambitions. Attlee’s statement of February, 1947 encouraged Jinnah’s designs and ‘Direct Action’ became the programme of the League. The British decision to transfer power, Jinnah’s intransigence and his nominees’ obstructive attitude in the Interim Government apart, the danger of wide-spread communal riots and Mountbatten’s skilful negotiations with the Indian leaders, made the Partition of India inevitable. Consequently, on July 15,1947 , the nationalist leaders voted for the resolution to accept Mountbatten Plan calling for Partition of India. On the 14th  of August, the Dominion of Pakistan was inaugurated by the Governor General at Karachi.