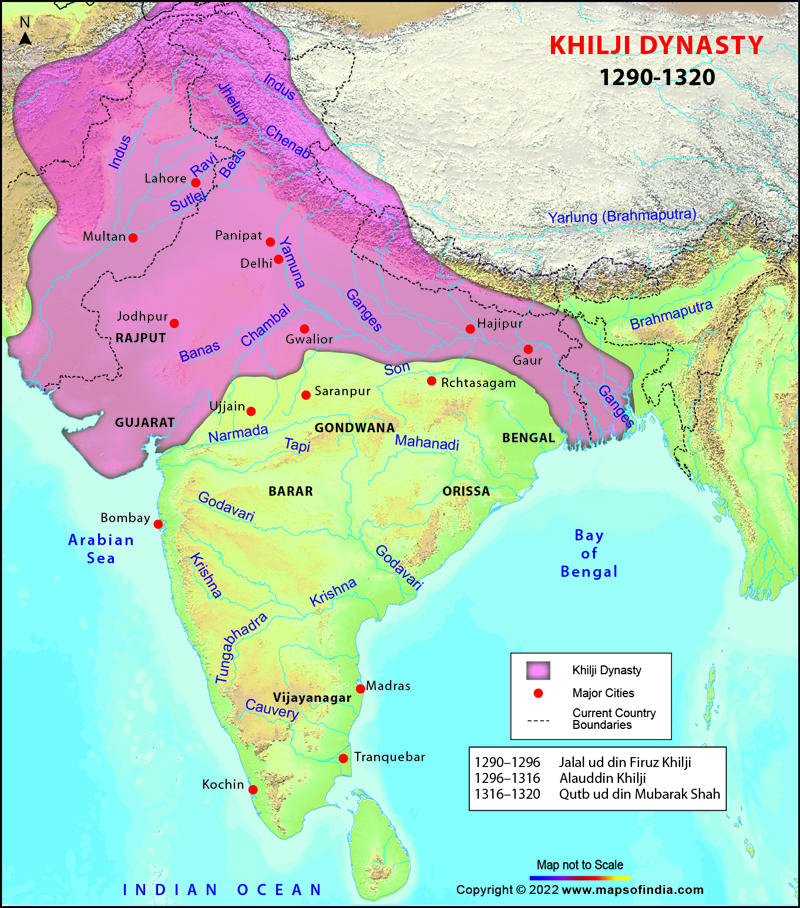 The Khalji rulers ruled for three decades. They expanded the Sultanate further. The first ruler of the dynasty was Jalal-uddin Khalji.

Jalal-ud-din Khalji was very old when he ascended the throne. He was not a strong ruler. He adopted a lenient policy towards the Mongols and married one of his daughters to Ulugh Khan, the leader of the Mongols. Jalal-ud-din was succeeded by Ali Gurshap, who took the title of Ala-ud-din.

Ala-ud-din Khalji was the most powerful ruler of the dynasty. He was an ambitious king and wanted to establish an all-India empire. He needed money to expand the empire. To increase revenue collection, Ala-ud-din introduced many economic reforms.

Ala-ud-din Khalji ordered the measurement of all land under cultivation. After assessing its fertility, the land was divided into different categories. The land tax was fixed accordingly.

To get more revenue, Ala-ud-din raised the land tax in the doab region (the fertile land between the Ganga and the Yamuna rivers) to one-half of the produce. He also tried to keep a check on the extra income that the nobles got by levying extra taxes on the peasants.

Ala-ud-din introduced a market control policy. He fixed the prices of all essentials commodities at a low level. Shopkeepers were asked to adhere to those rates. He appointed special officials to keep a check on the shopkeepers. Whoever charged even a little extra from the people was severely punished.

Reforms in the Army

Revenue reforms made more money available to the king. With that money, Ala-ud-din was able to keep a permanent standing army. He paid his soldiers in cash. He started branding horses to prevent the substitution of good horses by horses of inferior quality. A descriptive roll (chehra) was maintained for each soldier. The king also employed spies who were posted in different parts of the empire.

Expansion of the Empire

Ala-ud-din Khalji conquered Gujarat and Malwa in the year 1297 A.D. and this gave him control over the western sea ports. Between 1301-1303, he captured Ranthambore and Chittor in Rajasthan. Thereafter, he sent a large army towards the south under his trusted general, Malik Kafur. He defeated the rulers of the Yadava, Kakatiya, Hoysala and the Pandya kingdoms. These rulers were also made to pay a tribute. For a short period, Ala-ud-din Khalji’s empire was as large as that of King Ashoka.

After Ala-ud-din Khalji’s death in 1316, a war of succession broke out. The last Khalji ruler, Khusraw Malik, was replaced by the Tughluq Sultans.