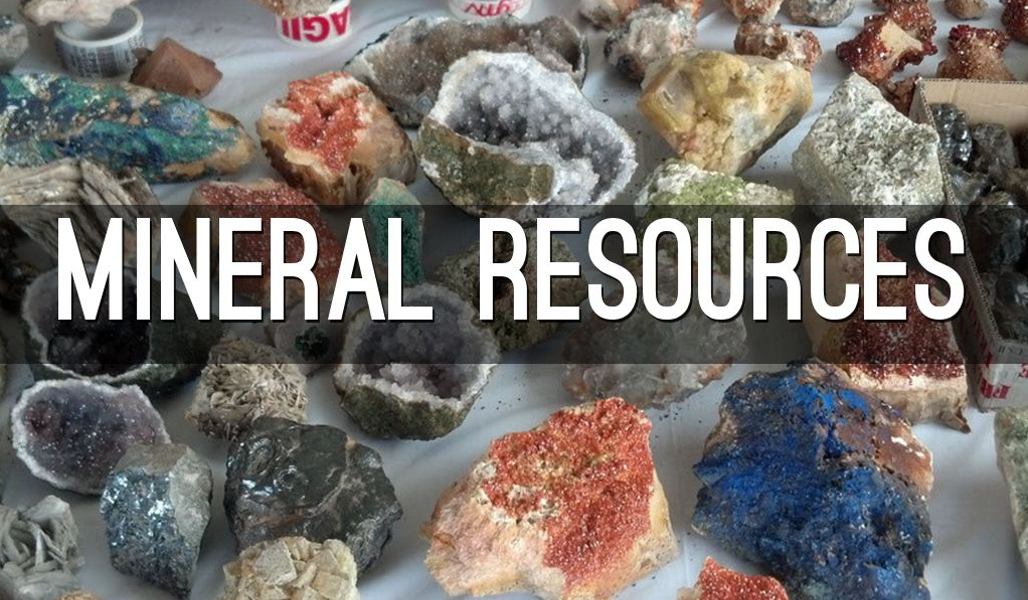 India is richly endowed with a variety of minerals. Large size and diverse geological formations have favoured India in providing wider variety of minerals. India is rich in iron ore, manganese, mica and bauxite. It is self-sufficient in materials for making cement such as dolomite and limestone, chromite, marble and other building stones, sodium salts and precious stones. India is deficient in copper, lead, zinc, tin, nickel and tungsten. India is also poor in minerals required for chemical fertiliser industry including sulphur, potash and rock phosphate. Large reserves of bituminous coal are found but there is scarcity of cocking coal and petroleum in the country. However, it holds a strong position in the atomic minerals like uranium and thorium.

Iron ore is the backbone of modern civilization. It is the foundation of our basic industry. Today, iron ore is used all over the world. The standard of living of the people of a country is judged by the consumption of iron. Iron is taken out from the mines in the form of iron ore which contains varying percentage of iron. Two main types of ore found in our country are haematite and magnetite: Haematite ore mainly occurs in Jharkhand, Odisha, Madhya Pradesh, Maharashtra, Goa and Karnataka. Large reserves of magnetite ore occur along west coast, primarily in Karnataka with minor occurrences in Kerala, Tamil Nadu and Andhra Pradesh.

Manganese is mainly used in the manufacturing of non-abrasive and non-corrosive steel and ferro-manganese alloy. Nearly 10 kilograms of manganese is required for manufacturing one tonne of steel. It is also used for the manufacture of bleaching power, insecticides, paints, batteries and china clay. About one-h of the world’s manganese ores are found in India. The major reserves are distributed in Odisha, followed by Karnataka, Madhya Pradesh, Goa and Maharashtra.

Bauxite is the raw material for making aluminium. It is not a specific mineral but a rock consisting mainly of hydrated aluminium oxides. About 88 per cent of the recoverable reserves are of metallurgical grade. More than half of the reserves are coned in Odisha and nearly one-h in Andhra Pradesh, Telangana. Madhya Pradesh, Chhattisgarh, Maharashtra, Gujarat and Jharkhand also have large deposits of bauxite.

Copper is a malleable and ductile metal is non-fe rrous metal is used for electrical goods, utensils and coins. Jharkhand (Singhbhum, Santhal Parganas, Hazaribagh and Paloman districts and Bihar (Gaya district) are the leading producers. In Rajasthan, copper occurs in an extensive zone in Khetri running from Singhana belt in Jhunjhunu, Kho-Dariba area in Alwar, Delwara-Kerovli area in Udaipur, and Aguncha-Rampura in Bhilwara district. Balaghat is an important copper ore producing district of Madhya Pradesh. Guntur and Kurnool districts in Andhra Pradesh, Chitradurg and Hassan districts in Karnataka and Chandrapur Khamman district in Telangana and Pune, Satara and ane districts in Maharashtra also have copper deposits.

India has near monopoly in the production of mica producing about 60% of the world’s total production. The main mica belt lies in Nellore district of Andhra Pradesh. Vishakhapatnam, West Godavari, and Krishna are other mica producing districts of this state Khamman district of Telangana also has mica deposits. Rajasthan is the second largest producer of mica in India. The main mica belt of Rajasthan extends from Jaipur to Udaipur. This belt is 322 km long and its average width is 96 km. Jharkhand, Bihar, Gujarat, Kerala, Madhya Pradesh, Chhattisgarh and Uttar Pradesh are the other mica producing states of India.

It is valuable metal which occurs in auriferous lodes and some of it is found in sands of several rivers. It is used for making ornaments and is known as international currency due to its universal use. India is very poor in gold reserves and produces less than one per cent of the world’s gold production. Gold in India occurs both in the native form as auriferous lodes and as alluvial or detrital gold in the sands and gravies of a large number of rivers. There are three gold fields in the country, namely Kolar Gold Field, Kolar district, Hutti Gold Field in Raichur district (both in Karnataka) and Ramgiri Gold Field in Anantpur district (Andhara Pradesh). Kolar gold field has been the pri ncipal producer since 1871 and most of the gold has been extracted. It has become one of the deepest mines in the world and extraction of gold has become uneconomical. So the production was stopped in 2009. Small quantity of gold is obtained from the sands of Subarnarekha river.