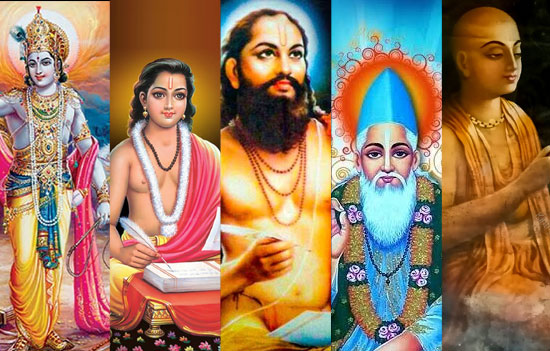 The Bhakti movement had a long history in India. The movement was started in the eighth century by the ‘alvar’ and ‘nayannar’ saints of South India. Shankaracharya, Ramanuja and Madhava further popularised the bhakti trend. During the medieval period, the movement spread to the north as well.

The use of the word ‘bhakti’ in the Pali literature goes back to the 8th century B.C. The Bhagavadgita, pre-Buddhist texts and Chhandogya Upanishad, all contain references which underline the emergence of devotion to a single personal God. The emotional reaction against rigid intellectualism is the core of ‘bhakti’.

Origins and Basis of Bhakti

The Bhakti Movement of South India was led by a series of popular saints ‘Nayanars’ (Shaivites) and ‘Alvars’ (Vaishnavites, who disregarded austere practices advocated by Jainism and Buddhism. They spoke and wrote in local languages like Tamil and Telugu and travelled widely to spread their message of love and devotion to everyone, irrespective of caste, colour and creed. The Bhakti saints belonged either to the traditional Saguna school, which believed in the existence of God in many forms and attributes like Rama and Krishna, or the new Nirguna School, which followed from the Vedanta philosophy and believed that God has no attributes. Ramanuja gave the Bhakti Movement a new meaning and helped in its spread to other parts of India during the 12 th century A.D. at the same time, Basava and his nephew Chinnabasaca founded the Lingayat or Vir shaiva movement in Karnataka. The Lingayats strongly opposed the caste system and rejected fasts, feasts, pilgrimages and sacrifices. They tried to bring about a reform in the Hindu social order by opposing child marriage and even encouraging widow re- marriages. Ramanuja founded the Visistadvaita philosophy.

The Bhakti saints emphasised upon selfless love and devotion, called ‘bhakti’, as a means of coming close to God. They condemned religious ceremonies and instead preached the idea of following a religion that was simple. They also condemned caste differences and encouraged religious tolerance. The Bhakti saints preached their message of love and devotion in local languages. This made them and their teachings very popular amongst the masses.

Many Bhakti saints became popular during the Sultanate period. Sant Kabir and Guru Nanak were the greatest of them all. An important development in the religious history of medieval India was the creation of a new sect by Ramananda, a disciple of Ramanuja. He had perceived the progress of Islam in North India under the Tughlaqs. He rejected the rigidity of the Hindu rituals and his disciples took the name of advadhuta (the detached) and regarded themselves free from traditional religious and social customs. However there were limits to their revolt. For instance, in his Anand Bhashya, Ramananda did not recognise the right of a sudra to read the Vedas. Although Raidas and Kabir were among his disciples, Ramananda did not show a commitment to social equality.

Ramananda’s teachings produced two distinct schools of thought among the Hindus: saguna and nirguna. The Saguna school of Bhakti developed in North India around the worship of Rama and Krishna. Tulsidas, Surdas, Mira Bai and Chaitanya were the most renowned saints of this school. Tulsidas (15321623 A.D.) composed the Ramacharitamanas in Hindi, which described the episodes from the life of lord Rama. He also wrote the Vinayapatrika. Surdas (1483-1563 A.D) narrated the childhood escapades of Krishna and his love devotee of Krishna and worshipped him as her lover. Tulsidas gave literary form to the religious Bhakti in worshipping Rama as the personal incarnation of the Supreme God.

Chaitanya (1486-1533 A.D.) epitomized the love between Radha and Krishna and Krishna and spread the message of Raga-Marga. He popularized kirtan as a form of devotional music. The other important Bhakti saints of this school were Sankaradeva in Assam, Janadeva in Maharashtra and Narsinh Mehta in Gujarat. Their philosophic beliefs were a brand of Vedantic monoism, which emphasized on the fundamental unity of God and the created world.

The other school was represented by Kabir who discoursed a religious system which was strictly monotheistic, advocating abolition of varna ashrama and questioning the authority of the Vedas and other sacred books. The school of Kabir sought to understand Islam and sought to incorporate some of its basic principles. That is why, references to him are available in the Sufi literature as well.

Kabir was a weaver from Benaras. He preached the existence of only one Supreme Reality, whom people call by different names such as Ram, Rahim, Hafri, Allah, etc. He tried to strengthen the reconciling trend introduced by way of bhakti and welcomed all who were willing to join him. Belief in a Supreme Being was the foundation of his preaching. He believed that salvation is possible not by knowledge or action but by devotion (bhakti). He neither favoured Hindus nor Muslims, but admired all that was good in them and emphasised on their unity. Kabir preached his message in the form of dohas or couplets, which could be easily understood by the masses. The Bijak, which is the authoritative account of Kabir’s philosophy, makes it clear that he never thought of founding a sect as happened after his death.

Guru Nanak was the founder of Sikhism. His philosophy comprised three key elements: a leading charismatic personality (the guru), ideology (shabad) and organisation (sangat). Nanak evaluated and critically examined prevailing religious beliefs and attempted to establish a true religion which could lead to salvation. He composed many hymns where he preached true devotion to God. He advised people to follow the basic principles of conduct and worship: sachh (truth), halal (lawful earning), khair (wishing well of others), niyat (right intention) and service of the lord. Nanak denounced the caste system and the inequality which it perpetuated and consequently rejected class and caste differences. To end these differences, he started the practice of langars or common kitchens, where people of all classes and castes would have meals together. He was also against rituals. He encouraged women to join the Bhakti trend. Nanak made an attempt to unify Hindus and Muslims and succeeded in synthesising, within his own teachings, the essential concepts of Hinduism and Islam. His teachings, which are in the form of verses, have been compiled in the book called the Adi Granth, written by Guru Arjan.

It was the tenth Guru Gobind Singh who inaugurated the khalsa (brotherhood) among the Sikhs. After the death of Guru Gobind Singh the divine spirit did not pass on to another Guru but remained in the Granth and the community of the Guru’s followers.