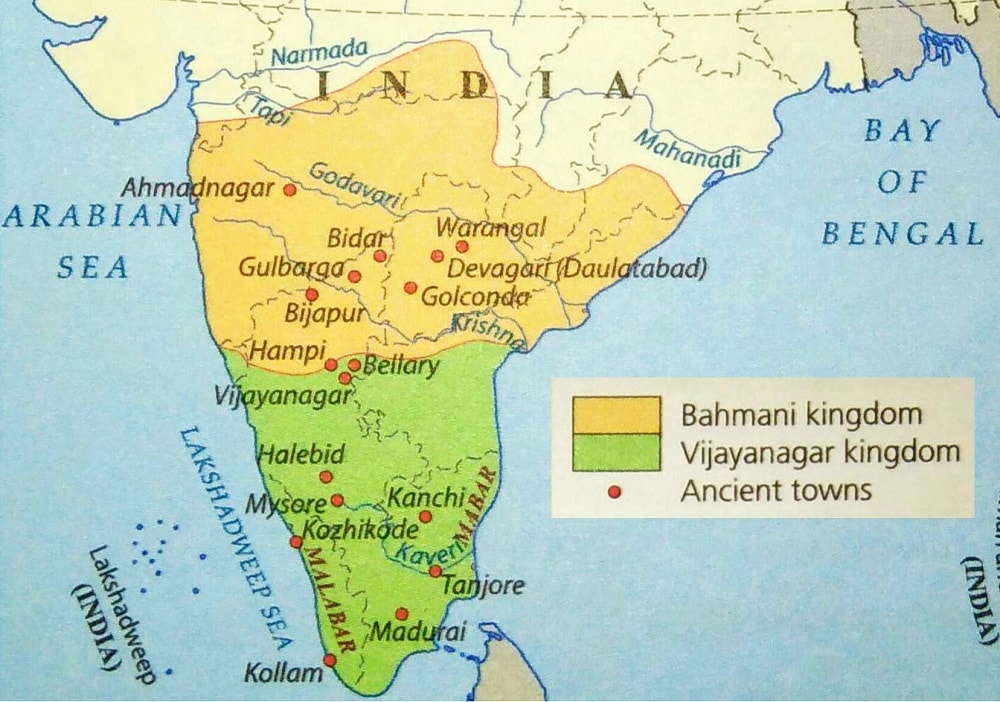 The kingdom of Vijayanagar was established by two brothers – Harihara and Bukka Rai-in the year 1336. They were feudatories of the Kakatiyas of Warangal. When the kingdom of Warangal was overrun by the Tughluqs in 1323 , they shifted base to Kampili. Here, they entered into the service of the local Hindu rulers. When Kampili was conquered by the Tughluqs, the two brothers were taken captive. They were later released and sent to South India to quell the rebellions three. After some time, the two brothers rebelled against Muhammadbin Tughluq and declared their independence. They established the kingdom of Vijayanagar.

Harihara ascended the throne in the year 1336. He ruled for 20 years. Bukka took over from him and ruled till 1377.

The kingdom of Vijayanagar lasted for 230 years. Rulers from three dynasties ruled over the kingdom.

Historians consider Krishnadeva Raya as the greatest ruler of the Vijayanagar Empire. Under him, the kingdom touched the pinnacle of power and prosperity in South India. A Portuguese traveller, Domingo Paes, visited the court of Krishnadeva Raya. His accounts tell us about the political, social and economic conditions prevalent in those times.

Krishnadeva was a brilliant general. He defeated the Bahmani king and the kings of Orissa. He also annexed the Raichur doab, a very fertile area between the Krishna and the Tungabhadra rivers. Under him, the empire covered the whole of South India. The king encouraged trade and commerce. He established trading link between the Portuguese, the English and the Dutch. He also paid great attention to agriculture. Realising that increased production would bring more revenue to the kingdom, he built many tanks, dams and canals in the kingdom.

The king was the supreme authority in all administrative matters. He was assisted by a council of ministers. The kingdom was divided into mandalams (provinces), each headed by a governor, nadus (districts), sthalas (sub-districts), and gramas (villages).

Vijayanagar was a very rich kingdom. It owed its prosperity to agriculture and trade and commerce. Travellers such as Nicolo Conti and Abdur Razzaq mention in detail the splendour of the Vijayanagar court and the luxurious lifestyles of the nobles.

Land revenue was the main source of income. It was levied according to the fertility of the land. In addition, there were other taxes such as tax on property, tax on sale of produce, tax on profession, tax on marriage, etc. A flourishing trade enriched the kingdom.

Most historians believe that the prosperity of the kingdom was limited to a few. The nobles and the peasants lived contrasting lives the letter remaining poor and downt rodden.

The capital of the kingdom was Hampi. It had beautiful buildings, especially temples. The Vittalaswami temple, the Virupaksha temple and the Hazara Rama temple are fine specimens of temple architecture under the rulers of Vijayanagar. Beautiful sculptures were carved on the walls of these temples.

Literature Literature also progressed in this kingdom. The rulers encouraged Sanskrit, Tamil, Telugu and Kannada. Sayana wrote commentaries on the Vedas. Krishnadeva Raya, himself, was a great Telugu and Sanskrit scholar. He composed a poem called Amuktamalyada in Telugu. He patronised many learned men in his court. This included the eight great Telugu scholars, collectively called the ashtadiggaja. The Vijayanagar kingdom weakened after the death of Krishnadeva Raya. His successors were not very strong. The rulers of Bijapur, Ahmadnagar and Golconda joined hands and defeated the ruler of Vijayanagar at Bannihatti, near Talikota, in the year 1565. This is known as the Battle of Talikota. It marked the end of the kingdom of Vijayanagar.

The Bahmani kingdom was established by Ala-ud-din Hasan. He had risen in the service of a person named Gangu and was therefore known as Hasan Gangu. He ascended the throne in the year 1347 and took the title of Ala-ud-din Bahman Shah. The dynasty that he started came to be known as the Bahmani dynasty.

The Bahmani kingdom lasted for 180 years, from 1347 to 1527. First Gulbarga and then Bidar became the capital of the kingdom. The kingdom comprised whole of the northern Deccan up to River Krishna. The two powerful people in the kingdom were Firoz Shah Bahmani and Mahmud Gawan.

Firoz Shah was a powerful ruler. He defeated the Gond king, Narsing Rai and annexed some of his territories. He also fought against the Vijayanagar territories rulers and conquered the fertile Raichur doab. He succeeded in conquering it, but lost it again.

Firoz Shah was a learned man. He had a scientific bent of mind. He was also a good poet and was well-versed in Persian, Arabic, Turkish, Telugu, Kannada and Marathi. He made Deccan the cultural centre of India. Many learned people from Delhi migrated to the Deccan. He was a tolerant ruler and respected all religions. A large number of Hindus were employed in his court.

Mahmud Gawan was the wazir (Prime Minister) of the Bahmani king, Muhammad Shah III. He made the kingdom very powerful.

He was an Iranian by birth. He came to India and settled down in the Deccan. He took employment in the court of the Bahmani king and soon became a favourite of the king. For 18 years, he managed the affairs of the kingdom. He expanded the kingdom and re-organised the civil, military and revenue administration.

Mahmud Gawan was a patron of learning. He was well versed in mathematics and literature. He encouraged the growth of the Urdu language and invited scholars from Iran and Iraq. He also built a magnificent madrasah or college in Bidar. Students from different parts of India as well as from outside came to study in it.

A constant problem faced by the kingdom was the conflict between the Deccani and the Pardesi nobles. The Deccanis were nobles of local origin. The Pardesis were of foreign origin. They had come from Iran, Turkey, Arabia and central Asia and had established themselves at the Bahmani court. The two groups were always scheming against each other.

Mahmud Gawan was a Pardesi. He adopted a policy of conciliation but failed to unite the two groups. His opponents hatched a conspiracy against him. He was executed in the year 1481. His successors were weak. Governors in far-off regions declared their independence. In the absence of strong rulers, the kingdom began to disintegrate.

The administration at the centre was headed by the Prime Minister. He was called wazir or vakil. Other senior officials were the amir jumla (head of finance), the wazir-i-ashraf (head of foreign affairs) and sadar-i-jahan (head of the religious and judicial department).

The kingdom was divided into many provinces called ‘taraf. Each was under a governor, called the amir or tarafdar. He was paid through jagirs. The governors had their own armies. They helped the king with men and equipments during times of war.

Architecture flourished under the patronage of the Bahmani rulers. They built numerous mosques, madrasahs and libraries. The most famous monuments of the Bahmanis are the Jama Masjid at Gulbarga, the madrasah of Mahmud Gawan, and his tomb at Bidar. The Gol Gumbaz at Bijapur was built by the Bijapuri rulers, the successors of the Bahmanis. It has borrowed many features from the architectural style of the Bahmanis.

Summary of Vijaynagar and Bahmani Kingdoms