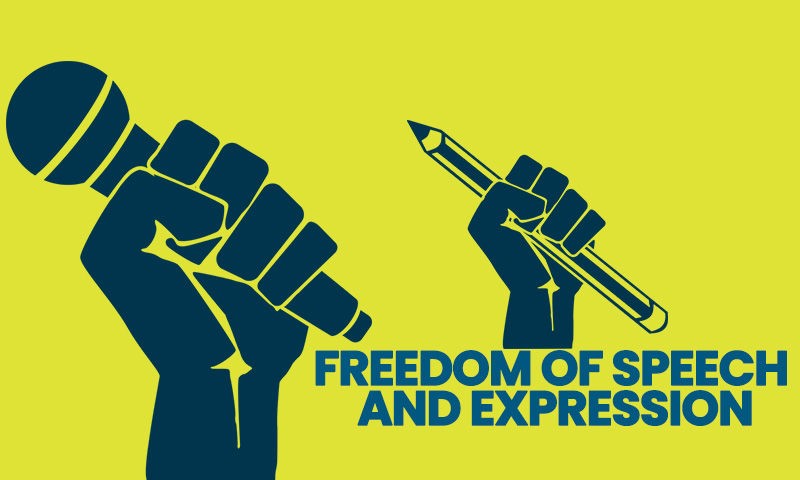 Freedom of Speech and Expression, as in Article 19(1)(a), being essential for a democratic government, means the right to express one’s own opinions freely by words of mouth, writing, printing, (i.e., right to freedom of press as has been held in the Indian Express Newspaper v. Union of India—1985) circulating or by any other mode (Romesh Thaper v. State of Madras, 1950), which freedom also includes right to know (Prabhu Dutt v. Union of India—1982) together with the right to information. Furthermore, this freedom too includes not only right to vote, but also right to know about the candidates seeking elections (Union of India v. Association for Democratic Reforms, 2002). Telephoning tapping is violation of Article 19(1)(2) as is evident through the People’s Union for Civil Liberties v. Union of India—1997) on the ground that when one talks on the telephone, he/she is expressing one’s opinions.

(b) Freedom of Assembly, under Article 19(1)(b), has certain restrictions: it has to be peaceful, it has to be unarmed and it has to be exercised under reasonable restrictions. But when a lawful assembly becomes unlawful, it can be dispersed (Dasappa v. Dy. Additional Commissioner—1960). It may be remembered that freedom of assembly includes right to hold meetings and take out processions.

“The freedom to form unions includes freedom to form any cooperative societies institutions political parties. But it does not mean that formation of any union interferes with the policy of government. “The trade unions have no guaranteed right to strike or declare a lock-out (N.B. Khare v. State of Delhi—1961). “The 97th constitutional amendment (2012) permits the formation of cooperative societies.

(d) Freedom of movement under Article 19(1) (d) guarantees to all citizens of India the right to move freely throughout the territory of India. It is subject to reasonable restrictions mentioned in clause 5 of Article 19. “The main object of this freedom is that entire territory is one unit so far as the citizens are concerned (N.B. Khare v. State of Delhi—1961). “The Supreme Court held the view that the right to movement of prostitutes may be restricted on grounds of public health and in the interest of public morality (State of Uttar Pradesh v. Kaushalya—1963). “The right of the citizens to move freely may be, by law, restricted to protect the original tribes belonging to the Scheduled Tribes. “The requirement of wearing helmet is not a restriction on free movement of citizens, (Rajnessh Kapoor v. Union of India—2007).

(e) Freedom of residence, under Article 19(1)(e) and 19(5), is granted to every citizen so to reside and settle in any part of the country. “The order to remove prostitutes, as in the case of State of Uttar Pradesh v. Kaushalya—1963 under the Suppression of Immoral Traffic in Women and Girls Act, 1956 is regarded a reasonable restriction. In Ibrahim Wazir v. State of Bombay, under the Foreign Acts of 1964 and 1966, asking the natives to leave the country during emergencies, without valid permit is not a reasonable ground to leave the country.

(f) Freedom of profession, occupation, trade or business, under Article 19(1)(g) and 19(6), is guaranteed to every citizen and is restricted and regulated by authority of law. “The right to carry on business does not mean right to close it, especially, it cannot be closed in the interest of general public (see Excel Wear v. Union of India—1979) nor does it ensure right to work (see Fertilizer Corporation of Kamgar Union v. Union of India—1981). Indeed, a citizen has a fundamental right to trade or do business, but there is no fundamental right on activities which are immoral, anti-social, anti-national, criminal or trade in articles or goods which are obnoxious and injurious to health, safety and welfare of general public. “The Supreme Court held that the state lotteries are not only trade or business, but gambling (see M/s B.R. Enterprises v. State of Uttar Pradesh—1999). Likewise the sale of pan masala and gutka and liquor to under-aged is violative of article 19(1)(g) (see Godawat Pan Masala Products Pvt. Ltd, v. Union of India—2005).

“Through the membership of banned organisations is, in itself illegal but mere membership will not make a person criminal unless he resorts to violence or incites people to violence etc (see Arup Bhuyan v State of Assam, 2011).