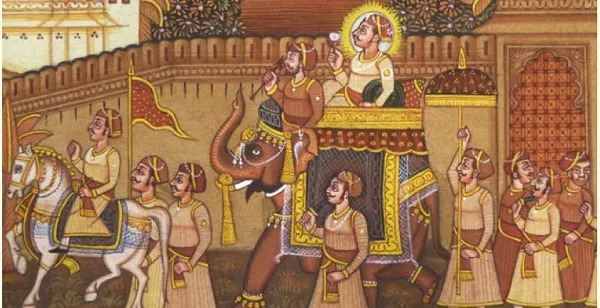 Some Characteristics of the Medieval Period

The medieval period in India is characterised by some broad trends. These were the outcome of India’s interaction with Muslims as well as the next of the world.

Historical Sources of Information Regarding the Medieval Period

These sources include monuments, temples, inscriptions, coins, utensils, tools, weapons, ornaments, paintings, etc. Monuments, artefacts and paintings throw light on the society and economy of the time. Rulers of south India encouraged temple building activities. Temples are a rich source of religious and cultural history. Paintings are another valuable source, particularly for the study of the Mughal period.

Coins are equally important for the study of the history of medieval India. They give us dates of important political events. A book on coins titled Drarya-Pariksha (an examination of coins) was written during the reign of Ala-ud-din Khsalji. It lists details of coins minted during the reign of the Sultan.

This group of sources include chronicles of rulers and dynasties, biographies and autobiographies, accounts of foreign travellers and other literary works. Original farmans (imperial decrees) and the correspondence of some rulers also provide us an insight into the period. Political chronicles are another important category of source material. Most of them were compiled under the patronage of kings. A few were compiled by independent scholars, who were not associated with the courts.

Most of the original sources of the medieval period are in the Persian, Arabic and Turkish languages. Firishta wrote Tarikh-iFirishta. It deals with the history of the Delhi sultans, the Mughals and the provincial kingdoms that prospered during the period. Other important works of this period include Al-Beruni’s Tahkiki-Hind, Barani’s Tarikh-i-Firoz Shahi, Tabaqat-i Nasiri by Minhaj-us Siraj, Muntakhabul-Tawarikh by Badauni, Akbarnama and Ain-iAkbari by Abul Fazl and Abdul Hamid Lahori’s Padshahnamah.

Among autobiographies, the most famous works are the Futuhat-i-Firoz Shahi of Firoz Shah Tughluq, Baburnama of Babur and the Tuzuk-i-fahangiri of Jahangir.

Works in Sanskrit and other languages include PrithvirajRaso of Chandbardai, Bilhana’s Vikramankadeva-Charita and Kalhana’s Rajatarangini. The last one is a history of the kings of Kashmir and was written in the twelfth century.

The travelogues of the period are yet another important literary sources. Muslim travellers visiting India wrote an account of their travels. Ibn Battuta’s Rihla (The Travelogue) describes the reign of Muhammad-bin Tughluq. Al-Beruni also wrote an account of his stay. Abdul Razzaq visited the kingdom of Vijayanagar and wrote about the conditions there.

The accounts written by European travellers are another source. Some of these providing an account of the conditions in India at the time of their visit include:

Significant Features of the Medieval Period