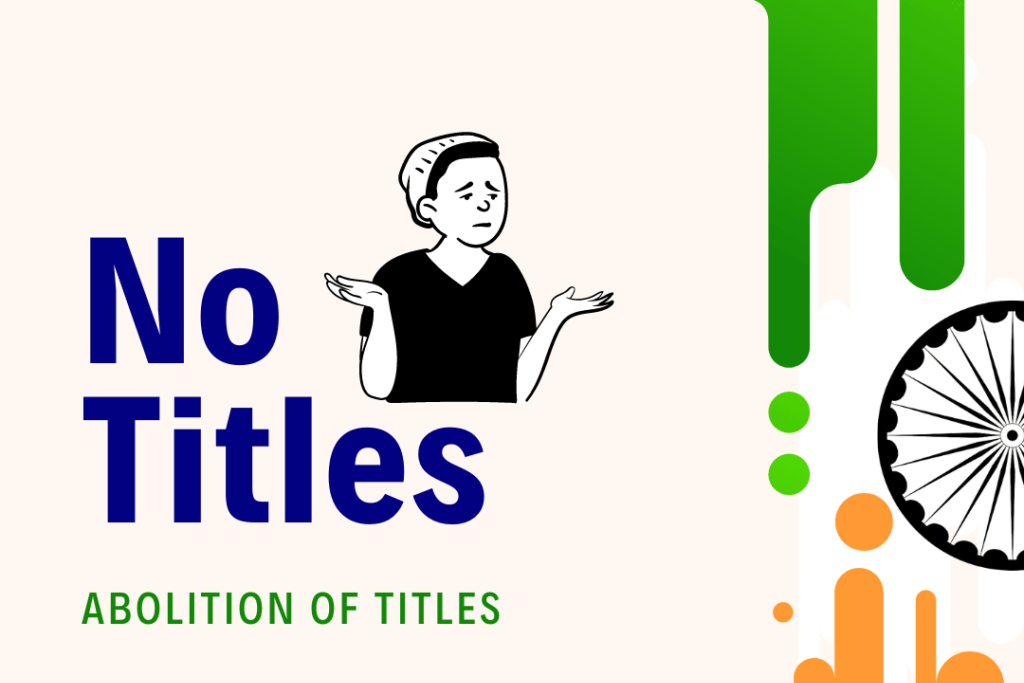 No title, not being a military or academic distinction, shall be conferred by the State.

All citizens shall have the right —

(a) to freedom of speech and expression;

(b) to assemble peaceably and without arms;

(d) to move freely throughout the territory of India;

(e) to reside and settle in any part of the territory of India; omitted by 44th amendment (1978) and

(f) to practice any profession or to carry on any occupation, trade, or business.

“There are, thus, six freedoms which are, however, not absolute. “The State is empowered to impose by law reasonable restrictions (as laid down in clauses 2 to 6 of Article 19) such as the interests of the sovereignty and integrity of India, the security of the State, friendly relations with foreign States, public order, decency, or morality; or contempt of court, defamation, or incitement to an offence, in the interest of the general public or for the protection of the interests of any Scheduled tribe (clause 5 of Article 19) and the like. It may, however, be stated that these freedoms have been available to the citizens including shareholders of the companies/corporations though neither the companies nor the corporations are regarded as citizens (Bank Nationalisation (1970) and the Newspapers (1973) cases). Indeed, the freedoms as stated in Article 19 are to be exercised within the framework of reasonable restrictions—restrictions which help control, regulate and reconcile the desires of one with all the rest (A.K. Gopalan v. State of Madras, 1951). While making laws with regard to the reasonable restrictions in the exercise of freedoms under Article 19, for example, (i) that the restrictions on the AIDS suffering patients (Lucy v. State of Goa—1990) are always reasonable; (ii) that ban on slaughter of bulls below 16 years would amount to reasonable restrictions but total ban on slaughter of bulls is an unreasonable restricton (Hasmmattulah v. State of Madhya Pradesh—1996); (iii) that judiciary, and not the legislature, is to decide as to what amounts to be a reasonable restriction (Chintamani Rao v. State of Madhya Pradesh—1951).