Amendment Process of the Constitution 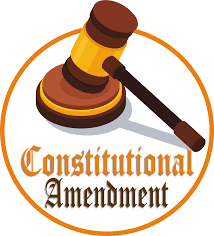 To amend means to change, add, or rephrase, to make a correction, and/or an alteration. When we talk of the amendment of the Constitution, we mean change in the Constitution by way of addition, deletion, or correction so as to suit the changing times. The Oxford Dictionary of Laws denes amendment as changes made for the purposes of adding to, correcting or modifying the operation of legislation/constitution. e Black’s Law Dictionary refers to the amendment as “a formal revision or addition proposed or made to a statute, constitution, pleading, order or other instrument.” e Kesavananda Bharati’s case provides a detailed definition of amendment saying. “A broad definition of the word “Amendment” will include any alternation or change. e word ‘amendment’ when used in connect ion with the Constitution, may refer to the addition of a provision on a new and independent subject, complete in itself and wholly disconnected from other provisions, or to some particular article or clause, and is then used to indicate an addition to, the striking out, or some change in that particular article or clause.” The amendment, in the context of the Constitution, would, therefore, mean ‘change’. ‘alteration’, addition’, deletion’ or ‘correction’, substitution’, ‘repeal’ in any article(s), clauses, part(s), or schedule(s) of the Constitution.

All written or enacted constitutions are related to the times, as they are written at a particular point of time. As the times/circumstances/situations change from time to time, the constitutions written at specific times an d under specific conditions need to be kept in pace with the changing circumstances. If they do not, they sink in history and become out-modified. The written constitutions need to remain alive and, in fact, keep themselves in “living” conditions. Accordingly, the written constitutions do possess the methods of changing themselves though specifying the procedure of their amendment. As Nehru had said: “While we want this (the Indian) Constitution to be solid and permanent as we can make it, there is nothing permanent in the Constitution. There should be certain ability. If you make anything rigid and permanent, you stop the nation’s growth, the growth of a living vital organic people.”

In addition to Parliament’s power to amend the Constitution in the aforesaid areas, the State Legislative Assemblies also have the power to amend Article 164(5) which relates to the salaries and allowances of ministers in the States. Technically, the amendments in the above-mentioned list may not be called amendments in the context of Article 368; yet as these help amend certain Articles and the Schedules through a method as that of the law-making procedure, they may well be described as amendments.