Amendments through the State Governments 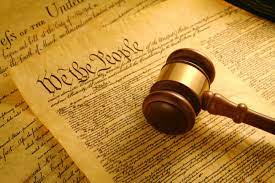 The amendments through the state governments fall under two categories: (a) some of the provisions of the Constitution can be amended at the initiative of the State, and (b) some can be amended in consultation with the State. The provisions relating to the abolition or creation of upper house in a state fall under the first category. Under Article 169, a state assembly passes a resolution by a majority of not less than two-thirds of its members present and voting for having or abolishing its upper house, the Parliament may pass a law on its behalf by a simple majority. Once such a law is passed, the Constitution stands amended.

The provisions relating to the formation of a state and alteration of the boundaries of the name of a State fall under the second category. Under Articles 3 and 4, the Parliament has the power to form new states and alter the boundaries and names of the existing states. It can also make consequential changes in Schedules I and IV. e Parliament can do so by passing a law, by a simple majority. But no such Bill can be introduced in Parliament except on the recommendations of the President. When such a law is going to affect the area, boundary or name of a State, the bill has to be referred to the legislature of the affected state for its views thereon within such period as may be specified in the reference (this period may be extended by the President). Once such a law is passed, the Constitution stands amended accordingly.

Other Provisions related to amendments

Assent of the President

A glance on the procedures of amendment, as stated above, shows that there are certain specific feature s relating the process of amendment. These features may be stated as under :