The Constitution of India: The Preamble 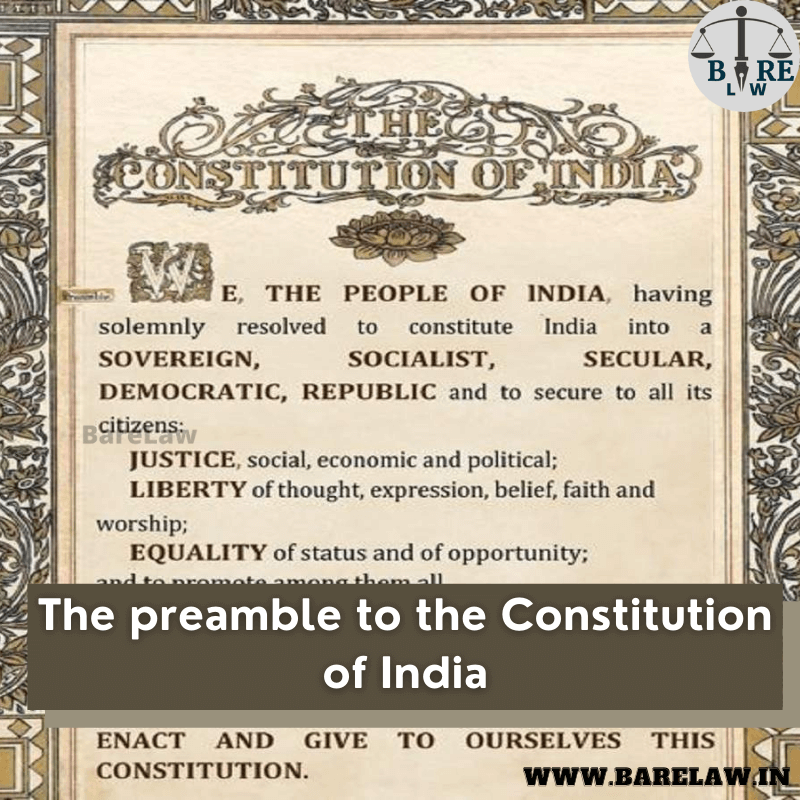 Constitution of India has a Preamble which reads as:

WE, THE PEOPLE OF INDIA, having solemnly resolved to constitute India into a SOVEREIGN SOCIALIST SECULAR DEMOCRATIC REPUBLIC and to secure to all its citizens:

EQUALITY of status and of opportunity; And to promote among them all

FRATERNITY  assuring the dignity of the individual and the unity and integrity of the Nation.

IN OUR CONSTITUENT ASSEMBLY this twenty-sixth day of November, 1949, do HEREBY ADOPT, ENACT AND GIVE TO OURSELVES THIS CONSTITUTION. It needs to be noted that words ‘socialist’, ‘secular’, and ‘integrity’ were incorporated in the Preamble through forty-second amendment of the Constitution, in 1976.

India into—on 26th November, 1949 that is, what they really did, something which is now a matter of history; and (c) the revolutionary part which contains (i) the structure and nature of the polity of India, and (ii) the objects and the ideals, which the Constitution seeks to attain: both (i) and (ii) indicate the direction and the purpose of the Constitution.

The Preamble of the Constitution is significant in numerous ways: it states clearly the source from where the Constitution emanates: the source is the people of India and through them the representatives, elected by them; it contains the enacting clause: 26th November, 1949, when the Constitution of India was adopted, enacted and given (though the Constitution came into effect on January 26, 1950); it declares the type of government which the Constitution establishes to be formed : sovereign, socialist, secular, democratic, republic, and promoting fraternity among the people assuring the dignity of the individual on the one hand, and the unity and integrity of the nation on the other; it secures for its citizens justice (social, economic and political), liberty (of thought, expression, belief, faith and worship) and equality (of status and of opportunity).

The preamble reflects in dependent India’s identity, though its constitution might have been described as a text without author. e discussions in the Constituent Assembly, ranging from crude materialism to the highest form of idealism or from polytheism to atheism, brought before a problem, which spoke of a civilization that has been plural, a culture that has been diverse, a society that has been federal, a history that has been rich, and people who are capable of playing a role in the community of nations.

As regard the nature of government/polity, the Preamble seeks to constitute India into a ‘sovereign, socialist, secular, democratic, republic and promote fraternity among its people sovereign refers to a political society whose government is supreme over all within its boundaries and independent of all or any external control; socialist word refers to the elimination of poverty, ignorance, disease and inequality of opportunity (Atam Prakash a State of Haryana, 1986) and does not mean social ownership of all the means of production (G.B. Pant University of Agriculture and Technology v. State of Uttar Pradesh 2000); word ‘secular’ refers to a state that does not owe loyalty to any of the particular religion (Bal Patil v Union of India, 2005) and gives equal freedom to all religions, as Justice Gajendrajakhar had said or what Dr. S. Radhakrishnan had held that in India “no one religion should be given preferential status”; it is not non-interference of the state but that the state strives to respect all religions equally (Aruna Roy v. Union of India, 2003); the word ‘democratic’ refers to a system where sovereignty lies with the people and is exercised by the peoples’ representatives elected on the basis of universal franchise, periodically: the government remains representative, responsive and responsible; the word ‘republic refers to a state which is headed by a person as the representatives of the people, and not by any person hereditarily imposed; the word ‘fraternity’ refers to as has been explained in Raghunath Rao v. Union of India—1993, to mean a sense of common brotherhood, a common citizenship, a united and integrated nation respecting the dignity of all its people.

As regards the objects which the constitution, through its political institutions, wants to secure for its citizens, there are references to justice, liberty and equality: justice is to be social, economic and political: social justice implies on the one hand the absence of all distinctions and discriminations on any ground and the development of common brotherhood, i.e., unity in diversity; it also refers to the removal of inequalities and the provision and protection of the interests of the weaker sections of the society (Nakara v. Union of India – 1983) economic justice implies the protection of the interests of the working people and the removal of all types of exploitative measures: sufficiency for all before for the few; political justice implies the existence of a democratic society with franchise for all, equal participation in the functioning of the government and the protection of the rights and freedoms of the people. (Nandini  Sunder v State of Chhattisgarh, 2011, Liberty as incorporated) in the Preamble lays emphasis on two aspects : freedoms guaranteed to the individual—of holding opinions, and expressing them; the other aspect of freedom is related to the freedom of religion— freedom to believe in any religion and having any faith together with the manner to profess it. e Preamble refers to equality where the emphasis is on (a) equality of status, and (b) equality of opportunity: equality of status implies the enjoyment of equal status for all—respect for personhood; equality of opportunity implies the provision and the availability of opportunities equally for all.

It may be concluded that the Preamble has its own specific significance in matters related to the governance of the country. It does not grant any power but it gives direction as to how power be exercised; it does not construct the body of the Indian polity, but it provides soul to its body; it states as to where sovereignty lies in India and who, with what responsibilities and powers, would govern the people. The Preamble, in fact, is the preface to the Constitution, speaking the mind and intentions of the framers of the Constitution. It is an introduction to the ideals for which the Constitution strives to achieve. It is a key to resolve the doubts/ambiguities as they arise in the course of enacting the Constitution. It is a means to the understanding of the Constitution. It, in no case, enlarges the power of any political institution but it intends to explain the nature, extent and application of the powers exercised by the government. It is, in fact, a guide to know the Constitution, a keynote to the Constitution as the British political thinker, Ernest Barker has rightly described. It is, in short, as the former Chief Justice of the Supreme Court, M. Hidayattullah pointed out “the soul of our Constitution lays down the pattern of our political society `, which it states is a sovereign democratic republic.” The importance of the Preamble can be judged from the fact that it helps in the interpretation of the Constitution; it has in it the solution to all the riddles, which the provisions of the Constitution may pose from time to time.

Some aspects of the Preamble need not be unnotified. It is argued that the people either themselves or through their elected representatives, never constituted the Constituent Assembly and whatever it came up was the product of an indirectly elected partly and partly nominated representatives —the franchise, in 1935, was limited, (only 15% of the total population as voters) restrictive, discriminatory. The constituent Assembly, in fact, was dominated by an upper caste Brahminic elite with a narrow social base having no organised representation of India’s Muslim and socialist interests. The Preamble suffers from duplication and at places, even triplication. The Preamble, it is alleged, contains promises, which are either impracticable of being loy or of being so commonplace as not to have been given so much importance.