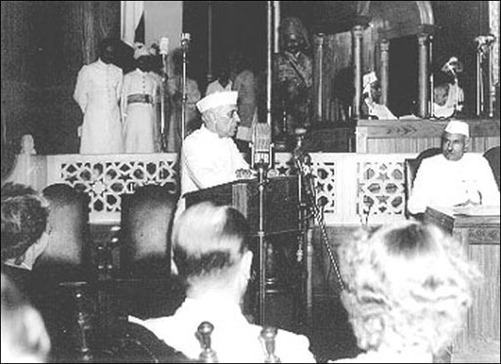 (ii) The country was partitioned into two dominions: India and Pakistan;

(iii) The paramountcy was abolished: the princely states were allowed to join any of the two dominions or remain independent;

(v) North Frontier Province and a part of Assam joined Pakistan after referendum.

The passage of the acts from 1858 to 1947 by the British Parliament for India demonstrates clearly the gradual introduction of the parliamentary system, and also growth of the legislatures in India from purely nominatedly structured to restrictively elective system, though the excessively despotic and discretionary executive remained dominating all through the Crown’s rule on India.

The economic impact of the Crown’s regime over India was devastating so far as country’s interests were concerned. The British authorities made our economy subordinate to their economy, reducing India as a source of raw-materials necessary for England’s industries. They crushed India’s traditional industries and impoverished our agriculture. India’s economy, during 1880-1920, grew at about 1% and population too, at 1% which, practically meant, no long-term change in per capita income levels. Agriculture was ignored and on the whole remained dormant with most peasants either starving or living at the subsistence level. Irrigation systems were extensively built but only to promote cash crops such as jute, cotton, sugarcane, coffee and tea. India’s global share of GDP fell drastically to less than 5% during the colonial period. The British, in fact, de-industrialized India, forcing us to export raw-materials and import the finished goods.

The net result was making India poorer in resources. e worst impact of the British colonial rule was the drain of wealth : Dadabhai Naoroji (Poverty and Un-British Rule in India, 1867) and R.C. Dutta, (Economic History of India, 1901) have shown as to how the British drained wealth through sources such as-

(i) profits earned by the British traders from business in India,

(ii) payments of salaries and other financial benefits received by the British employees working in India,

(iii) home charges spent on the India ocean and the Secretary of State for India and the India Council;

(v) expenditure made on military for waging wars with countries neighbouring India and elsewhere.

Lord Salisbury said India “was an English barrack in the oriental seas from which we may draw any number of troops without paying for them.” In one word, the economic impact of the British rule over India was, indeed, damaging to the extent beyond any repair : the common peasant, on an average, was born in debt, lived in debt and le his children in debt—poverty, backwardness, indebtedness, misery were his lot. The colonial masters did not do anything to promote industries which could favour the Indians and encouraged only industries such as plantations and machinery which helped full the British imperialistic designs.

In fields such as education, health and other public services, the British rulers paid no attention at all. Literacy, in 1911, was only 6% and when India became free, in 1947, it was only 8%. There were only four persons in 10.000 who were enrolled in the universities and higher educational institutions in 1935. Life expectancy was 25 years in 1921, which fell to 23 years in 1931; in 1934, there was one hospital bed for 3800 people in British India. ere were several pandemic s of cholera and the bubonic plague killing over 50 million in India alone while about 4.7 million died due to small pox between 1868 and 1907. There were over 120,000 people suffering from leprosy in1881.

The contribution of the British to our constitutional, political, administrative, economic, social and economic aspects can not be denied. They sought to introduce the British institutional and ideas replacing the native political ones, the oriental despotism with legititmate royal power royal power, as it existed in India for ages, was transformed, slowly and gradually of course, to Western liberal ethos which included the concepts such as private property, equality before law, the rule of law, Western culture and education, (especially the English language), and the liberty of the individual. Besides, the British introduced in India administrative structures such as the omnipotent executive head, legislative councils (mostly dormant), the judicial system based on the British pattern, the parliamentary democracy
(though implied), the civil services, the army and the police system—all these worked up to administer effectively and attain imperialistic designs. “The policy of ‘divide and rule’ helped the British to keep India and the Indians divided among themselves on social, religious and cultural lines. “Though the English made use of their language to impose the Western culture on the Indians, the English language itself, brought the diversely scattered and segregated people of India together to launch their freedom struggle successfully.

In one word, we may say that the British were able to transform our political culture. And yet, the British colonial state was both authoritarian and autocratic. “The laws were few but were largely harsh and mostly secretive; the administration was rules-oriented but the governance was repressive and oppressive; the civil servants and the police were a disciplined lot but enjoyed a large measure of absolute powers; the concepts of equality of all before law and the rule of law were introduced but the courts and the administration favoured only the Europeans, especially the British; civil liberties were assured but were denied to the Indians in the name of law and order; the railways, the postal services, roads were, indeed, built but all were to serve the ruling elite. And when they left India, they left behind, as Rabindranath Tagore had said, “a waste of mud and filth”—a poorer India inhabited by the poor Indians.