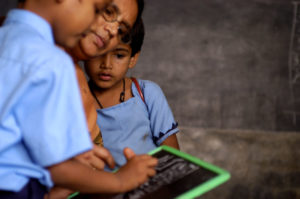 Article 29: Any section of citizens residing in the territory of India or any part thereof having a distinct language, script or culture of its own shall have the right to conserve the same. [Article 29(1)]. No citizen shall be denied admission to any educational institution maintained by the State or receiving aid out of State funds on grounds of religion, race, caste, language, or any of them. [Article 29(2)]

Article 30: All minorities, whether based on religion or language, shall have the right to establish and administer educational institutions of their choice [Article 30(1)]. In making a law providing for the compulsory acquisition of property of an educational institution established and administered by a minority, referred to in clause (1), the State shall ensure that the amount fixed by or determined under such law for the acquisition of such property is such as would not restrict or abrogate the right guaranteed under the clause [Article 30 (1A)].

“The State shall not, in granting aid to educational institutions, discriminate against any educational institution on the ground that it is under the management of a minority, whether based on religion or language [Article 30(2)]. Any section of citizens, a minority including, has the right, under Article 29(1), to conserve its language, script or culture. In S.P. Mittal v. Union of India—1983, the Supreme Court held the validity of the Auroville (Emergency Provisions) Act, 1980, violative of Articles 29 on the ground that the Auroville Ashram management was neither any religious nor any linguistic society which could enable it to avail the minority benefits. In State of Madras v. Champakam, 1951, the order of the Madras Government was held invalid for being violative of Article 29(2) for having denied admission only because the admission seekers were Brahmins. Article 30(1) and (2) gives rights to establish and administer educational institutions. In D.A.V. College, Bhatinda v. State of Punjab, 1971, the Supreme Court held the view that the right of the minority to establish and administer educational institutions of their choice includes the right to have a choice of medium of instructions, thus rejecting the university circular imposing Punjabi, as violative of Article 30(1).

“The scheme of reservation in private educational institutions (majority or minority) is violative of Article 30 (P.A. Inamdar v. State of Maharashtra, 2005). “The minority institutions have the right to establish educational institutions, but their recognition or affiliation is not their fundamental right; the academic standards and the conditions of services of the faculty members in such institutions have to be set and fixed by rules and regulations of the State and the universities (Frank Anthony Public School Employees v. Union of India—1986 and in Y. Theclamma v. Union of India—1987) and see also T.M.A. Pai Foundation v. State of Karnataka—2003).