The Constitution of India 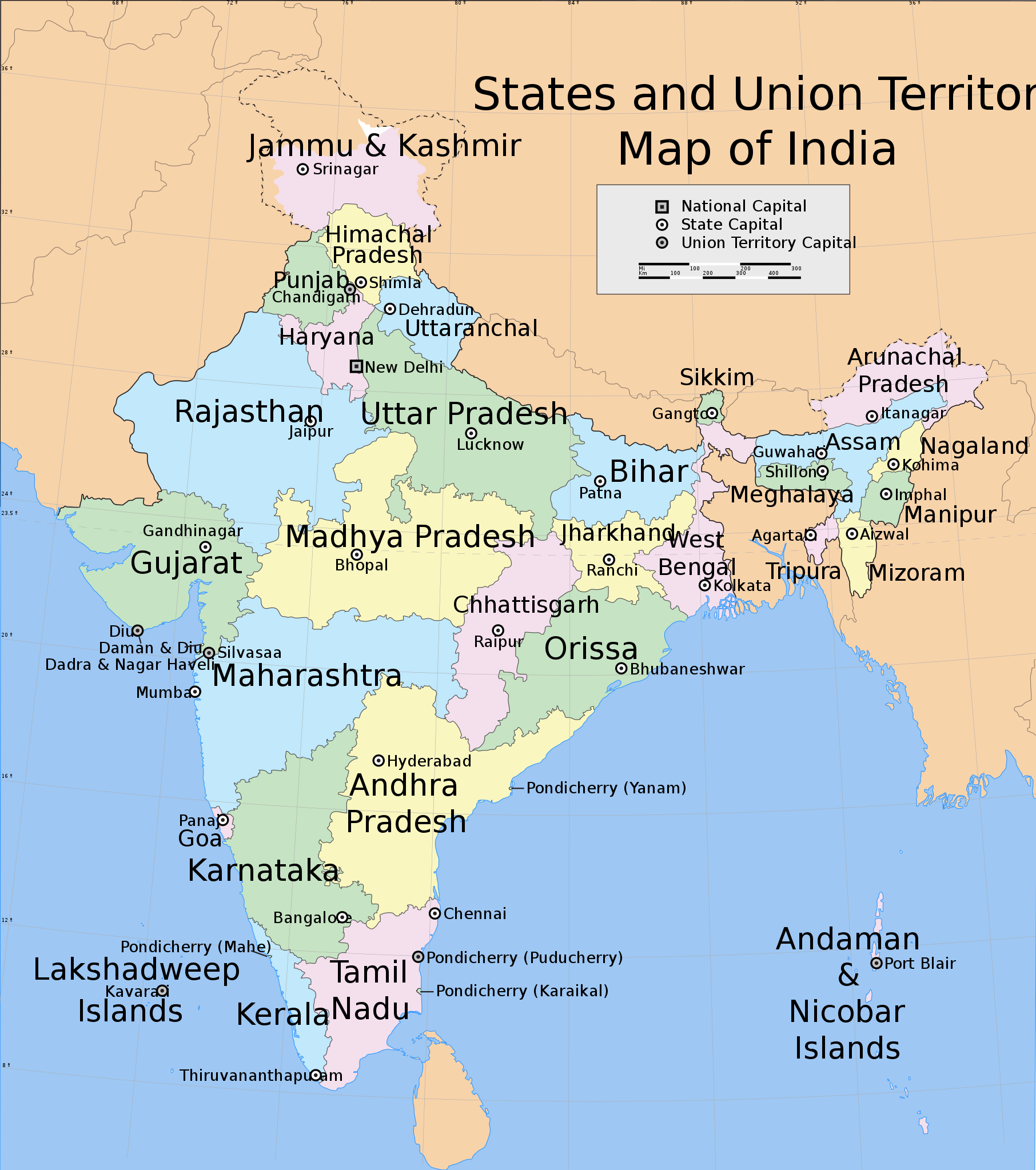 To know India is to know its people, its extent, its history, its culture, its civilization, its values. As we get to know it, we want to know more about it. Our desire to know it remains unfulfilled. We can never know it unless we become its part, the part of what the whole India is. Let us begin to know India, a little, to start with.

Uttar Pradesh is the most populous state with 199, 581, 477 people, followed by Maharashtra and Bihar while Sikkim is the least populated state with 607,688. Delhi, on the other, is the most populated union territory with 16,753, 235 persons and Lakshadweep is the least populated with 64,429 persons (census, 2011) : Uttar Pradesh is larger than Brazil in population while Haryana has more population than that of Australia; though Canada has larger population than Kerala, France is lesser populated than Rajasthan. Indeed the United Kingdom matches with Karnataka in population but both Andhra Pradesh and Telangana have less population than Germany. Among the largest state, in terms of territory, Rajasthan is the biggest state with 342,240 sq km as compared to the Republic of Congo, followed by Madhya Pradesh and Maharashtra, and Sikkim, the smallest one, with 7096 sq km; Andaman and Nicobar Islands, among the union territories is the biggest (8,249 sq km) and Lakshadweep, the smallest (32 sq km) in terms of territory, Maharashtra is as big as Italy and Uttar Pradesh as big as the United Kingdom. Punjab matches Denmark, and Haryana, Switzerland in territory. The high HDI states in India are Kerala and the union territory—the national capital—Delhi while the medium HDI states, among others, are Himachal Pradesh, Goa, and the low HDI states are, among others, West Bengal and Uttarakhand.

The Parliament, by law, can form a new state, increase or diminish, or alter the areas/boundaries of any state or can change the name of any state on the recommendations of the President provided the views of such changes are sought by the affected state(s) as stated in Articles 2 and 3 of the Constitution.

The state of United Provinces, became Uttar Pradesh in 1950; Madras became Tamil Nadu in 1969; Mysore became Karnataka in 1973; Laccadive, Minicoy and Animidivi Islands, became Lakshdweep in 1973; Delhi became the National Capital Territory of Delhi in 1992; Orissa became Odisha (in 2011) Pondicherry as Puducherry, earlier, in 2006. West Bengal is being proposed to be Paschimbanga.

All the above changes (of the boundaries or the names of the states and the union territories) came into effect through the amendments in the Constitution. Citizenship significance membership of a state, though all those who live in a state are not citizens; it is, in fact, a right as well a duty: a right in so far as it empowers a person who is a citizen to participate in the functioning of the state; a duty in so far as it expects a person who is a citizen to perform certain duties. All persons are not citizens, although all citizens are persons: an alien is a person but is not a citizen. Citizenship is a symbol, that aligns one to the state, a legal status with rights and responsibilities associated with it. Article 5 of the Constitution describes every person who has domicile in India a citizen of India: a person with no domicile of India is not a citizen of India. The Constitution, in its Article 5, recognizes one domicile and that too, the domicile of India, as has been stated by the Supreme Court in Pradeep Jain v. Union of India (1984). The domicile of India being the only one domicile, citizenship, in India, is, therefore, a single citizenship, Citizenship is extended to both the shareholders of the juristic persons like companies/ corporations as is clear from the decision of the Supreme Court in D.C. & G,M, v. Union of India (1983).

“The entire country is taken as one nation with one citizenship ………….”—The Supreme Court of India Accordingly, every person with domicile of India is a citizen of India if (a) he/she is born in India or (b) either of whose parents was born in India, or (c) he/she has been ordinary resident in India for not less than five years immediately preceding the commencement of the Constitution. Articles 6 and 7 of the Constitution also describe all those as citizens of India who have migrated to India from the territory now included in Pakistan at the time of the commencement of the Constitution as well as all those who or their parents or grandparents were born in India as deed in the Government of India Act, 1935 (Article 8). The Citizenship Act, 1955, amended there after from time to time, deals with acquisition and termination of citizenship. Citizenship, in India, is acquired by (a) birth : any person born in India on or after January 26, 1950; (b) descent : any person born outside India on or after January 26, 1950 if either of his/her parent is a citizen of India at the time of person’s birth; (c) registration : any person(s) by registering to that effect, before the prescribed authority; (d) naturalization: by applying for citizenship to the Government of India; (e) incorporation of a territory as a part of India. The Citizenship Act lays down that the citizenship of India may be lost by ways such as renunciation (when a person voluntarily acquires the citizenship of another country—Article 9) and deprivation (when the naturalization certificate has been obtained by fraud, when disloyalty or disaffection towards the Constitution is shown, when one is engaged or associated with the enemy country, when one has country).

In December 2003 a new law was passed which permits the people of Indian origin (PIOs) residing in countries viz. Australia, Canada, Finland, France, Greece, Ireland, Israel, Italy, the Netherlands, New Zealand, Portugal, Cyprus, Sweden, Switzerland, UK and United States, to have dual citizenship status. is enables them to participate in the economic activities and acquire real estate. As of January, 2006, the Indian government has introduced the “Overseas Citizenship of India” (OCI) so as to allow a limited form of dual citizenship.