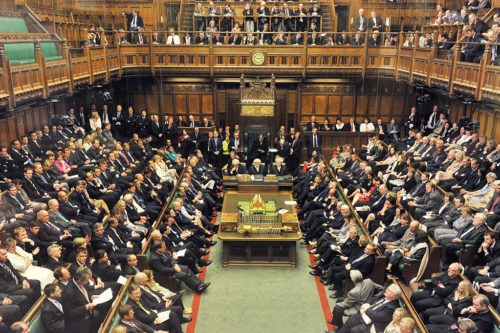 A Federal Polity with Centralizing Features :

The Constitution of India provides a federal polity structure in so far as there are almost all the federal essentials (written constitution, decentralization of powers— union list with 97 subjects, state list with 66 subjects, and concurrent list with 47 subjects and residuary powers with the Union Government—dual polity, dual laws, a set of dual judicial system, representation of the states in the upper chamber of the Parliament etc. etc.) stated in the Constitution, and yet the spirit of the polity is unitary—some commenting that India is 75 percent unitary and 25 percent federal, the Constitution, in its article 1, refers to India as “the Union” of the states. e Supreme Court of India, in The State of West Bengal v. Union of India—1961, had held that India is not truly federal, the unitary/centralizing features are quite evident in the Constitution : the division of powers is in favour of the Union Government; the Parliament can make laws on the state list subjects under special circumstances; the union has a greater role in the process of amendment of the Constitution; the provisions of single judiciary, single (that too, the Indian) citizenship and the like strengthen the forces of the union rather than those of the states. And yet, it cannot be said that the states, in India, are satellites of the Union. In a 1994 case, S.R. Bommai v Union of India, the Supreme Court had concluded : “Let it be said that the federation in the Indian Constitution is not a matter of administrative convenience, but one of principle—the outcome of our own process and a recognition of the ground realities.”

The Constitution has, in a general frame, adopted a parliamentary system of government, though with a certain amount of departure from the usual parliamentary form of governance. The President of India is made as the head of the state, the first citizen of the country, as also the supreme commander of the defence forces, with all the executive powers of the union vested in him and which are to be exercised either directly by him or through the subordinate to him (Article 53). Because article 74 binds the President to exercise all his functions on the advice of the Council of Ministers headed by the Prime Minister, makes the President as the constitutional head of the state and the Prime Minister as the head of the government. Besides, the Constitution demands the Council of Ministers (with the Prime Minister at its head) to be collectively responsible to the Lok Sabha, as also all the ministers to be members of either House of the Parliament (Article indicates clearly the adoption of the parliamentary polity in India. Though the position of the President of India is, more or less, like that of the British monarch, (Shamser Singh v State of Punjab—1974), but he is not a mere ‘golden zero’ because he, under Article 60 of the Constitution, has to ‘preserve, protect and defend’ the Constitution.

By respecting the courts in general and the Supreme Court of India in particular, the Constitution of India bestows on judiciary a position of power in the Indian polity. The Supreme Court of India has the responsibility of protecting the fundamental rights (Article 32), the federal structure (Article 131) and above all, the Constitution itself (Articles 132, 226 Kesavananda Bharati – 1973). e power of judicial review, explicitly stated and implicitly derived, with judicial activism, has enhanced the power and position of the Supreme Court and the High Courts in India.

Fundamental Rights, Fundamental Duties and Directive Principles of State Policy: The Constitution makes provision for a set of Fundamental Rights from Articles 12 to 35 (Part III), Fundamental Duties (Part IVA) and also certain Directive Principles of State Policy, as Part IV, are included in Articles 36 to 51. The six fundamental rights include right to equality (Articles 14 to 18), right to freedom (Articles 19-22) to right against exploitation (Articles 23 and 24), right to freedom of religion (Articles 25 to 28), right to cultural and educational rights (Articles 29 and 30), right to constitutional remedies (Article 32). Right to Property, once a fundament right under Article 31 until 44th amendment (1978) is now an ordinary right under Article 300 A.

The Supreme Court and the High Courts have the power to issue writs so as to protect the fundamental rights of the people. Rights, enshrined in the Constitution are not absolute and can, in fact, be enjoyed under reasonable restrictions. The fundamental duties, under Article 51 A, include numerous duties expected of the citizens and include, among others, abiding the Constitution and respecting its ideals, and the institutions (the National Flag, the National Anthem), upholding and protecting the sovereignty, unity, and integrity of India, defending the country, promoting harmony, preserving the composite culture, safeguarding natural environment, respecting women, developing scientific temper, protecting public property, abjuring violence and the like.

These fundamental duties were incorporated in the Constitution through 42nd amendment (1976). The directive principles of state policy, though not justiciable, have been described fundamental in the governance of the country in so far as the states are expected to make laws in accordance with the principles prescribed in this Part. These directive principles are socialistic, liberal, and Gandhian in nature and aim at establishing an egalitarian and welfare society in the country. M.C. Chagla, once, wrote about these principles, saying : “Our country would (after implementing these directive principles) indeed be a heaven on earth. India would then be not only a democracy in the political sense, but also a welfare state looking after the welfare of the citizens —a state in which there will be economic equality—(but) in which everyone would have the same opportunity to educate oneself, to work and to reap the reward of one’s labour.”