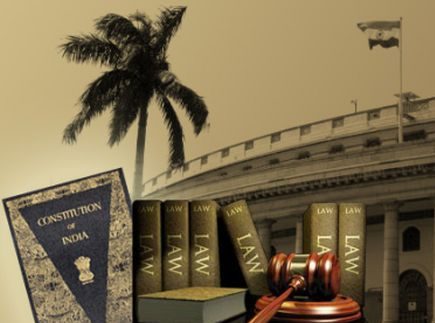 The English East India Company, established on the new year eve in 1600, was granted permission to trade with the eastern countries by Queen Elizabeth I, herself a shareholder of the 218 members merchant body. Profitability was its major objective initially, but as it grew to perform its territorial and administrative functions, its responsibility to strengthen its control over the territories under its possessions considerably increased. The Company, in England, worked through its two committees: the Court of Proprietors, i.e., the shareholders, and the Court of Directors, i.e., 24-members body which looked after the Company’s administration in India. In India, there used to be a council consisting of the chairman and four members who were to protect the commercial, territorial and administrative interests of the Company.

Between 1600 and 1757, the Company remained a trading group during which period it kept up its monopoly of trade, enhanced its trade interests by using its military power profusely —a patronage which the Company had from the beginning. During the period, the British government kept receiving its share from the Company; the shareholders’ dividend kept increasing, from 6.25 to 12.5 percent; the employees of the Company in India, went on making huge amount of money through their private trade—a concession which the employees had been enjoying for a long time. Between 1757 and 1857, the British Government continued extending her control both in England and in India in the name of regulating the airs of the Company until the British Crown took over all the Indian possessions of the Company in 1858, following what the historians, mostly English, call the revolt of 1857.

The Company’s regime, both as a trading and a territorial power, had considerable impact on India, which impact can be stated, briefly, as under:

In the year 1608, the English East India Company began its settlements in India; it was then, first Surat. In 1611, another settlement came up at Masulipatam while a trading outpost in Madras was set up in 1639; Bombay was given to the Company in 1668 by the British Crown as a dowry gift to Charles II by marrying the Portuguese princess, in 1661. The Company’s Hoogly factory was established earlier in 1640; Calcutta was founded by Job Charnock in 1686. us by the mid-18th century, the three presidencies—Madras Presidency (1640), Bombay Presidency (1687) and Calcutta Presidency (1690) were each governed by a Governor. Following the battles of Plassey (1757) and of Buxar (1765) and the grant of Diwani (1765), and of Nizamat (1772), the Company rose as a territorial power as well (in addition to the trading one) and her territories in India began increasing: the Company had the dominions of Raja of Banaras and the island of Salsette (between 1773 and 1785), portions of Mysore (1792), Tipu Sultan’s territories in 1799, Carnatic (1801). e other annexed regions of the Company included North-Western Provinces (i.e., Rohilkhand, Gorakhpur, the Doab (1801), Delhi (1803), Sindh (1843), Punjab, North-West Frontier Province and Kashmir (as a results of Anglo-Sikh wars in 1849) though Kashmir was sold in 1846 to the Dogra dynasty of Jammu), Berar (1854) and Oudh (1856), Kumaon, Garhwal and east Sikkim had already been annexed.

Between 1773 and 1857, the English East India Company had appointed 14 permanent Governors-General, nine out of which waged wars with the native rulers or with India’s neighbours; Charles Cornwallis not only gave what is called Cornwallis code, but also introduced the Permanent Settlement (i.e., the zamindari system); Wellesley’s contribution to India was his Subsidiary Alliance which took the shape of annexing the territories of the native rulers through the Doctrine of Lapse, profusely used by Dalhousie; Bentinck got abolished the Sati and suppressed thugee and dacoity; Auckland established post Ellenborough was able to enact the Slavery Act; during Dalhousie’s times, the construction of the Indian railways began, first telegraph line was laid and the Caste Disabilities Act was passed whereas Canning got the Hindu Widow Remarriage Act enacted.

Following the grant of Diwani in 1765, the English East India Company became a territorial power : a body of traders came to possess vast Indian territories through extracting land revenue and exerting administration by way of Nizamat. There arose a vital question as to how a subject, either an individual or a company, possess territory as a sovereign power. As this was the exclusive power of the British Crown to possess territories overseas, there remained the only possible alternative by the British Government in Company’s controlling the overseas territories on behalf of the British Crown. The British Crown availed this opportunity in 1773 when the Government while extending the Charter for the next twenty years began managing the Company’s money affairs. The act passed by the British Parliament cam e to be known as the Regulating Act of 1773. The 1773 act asserted that (i) the Company could act as a sovereign power on behalf of the Crown, (ii) the Company made rules subject to the regulations laid by the British government and the parliament, (iii) the Company was required to submit all civil, military and revenue communication for scrutiny by the British government, the Company’s Bengal Presidency headed by the Governor-General-in-Council was asked to control the other Presidencies, (v) the Company’s employees were asked not to engage themselves in private trade.

Pitt’s India Act of 1784, in the process of controlling the Company, established a Board of Control (of six members) in England to supervise the Company’s airs and prevented the shareholders to interfere in the Company’s governance of India; the act of 1784 extended the supervisory powers of the Governor-General-in-Council over the other Presidencies; the act gave the power of patronage (appointment power) to the British Government to be exercised through the Board. The Charter Act of 1813) terminated Company’s monopoly except in tea and trade with China, opening, thus, India’s trade to the private investors, and allowed missionaries to come to India. The Charter Act of 1833 revoked the Company’s trade licence altogether, seeking the Company to rule the Indian possessions as a part of the British Government. The Act bestowed the title of the Governor-General of India together with all the powers centralized in the hands of the Governor-General of India assisted by his council. Charter Act of 1853 authorised the Company to administer the territories and possessions in India on behalf of the British Crown till the time the British parliament, otherwise, provided. e Parliament took over the Company’s Indian administration in 1858.