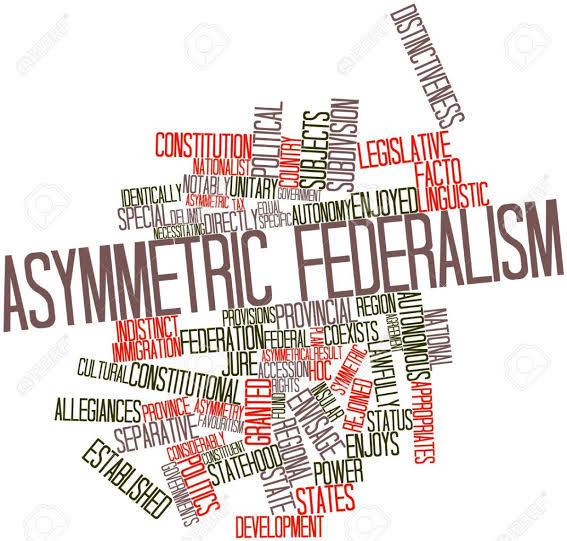 India’s form of federalism is asymmetrical, at least on two major aspects : one, the Union government is much more powerful than the States which have been, though reduced to the position of relatively weak federating units, if not to the level of ‘glorified municipalities’. Even the attempts made through 73rd and 74th amendments to create the local (rural and urban) governments as the third level (the other two being the Union and the States) of federation constitute only apologies of a true federation: ‘the strong Centre—weak States’ syndrome remains the fact of the first argument, Second, the States, in themselves, are unequal— drastically unequal. There are states —Punjab, Uttar Pradesh, Jammu and Kashmir, West Bengal, Tamil Nadu—powerful enough to seek, and had, in fact sought, more autonomy at one point of history, though now, at present, they (by becoming partners in coalition owing largely due to the weaker position of the national parties), demand their own pound of flesh while the other States, usually smaller and weaker (Arunachal Pradesh, Assam, Tripura, Meghalaya, Mizoram, Nagaland, Sikkim) ask for special provisions/concessions (Articles 371) and its numerous parts—the State of Jammu and Kashmir has a separate Constitution on the strength of Instrument of Accession.

The fact of the matter is that the federating units are highly unequal: Rajasthan, in terms of area is 90 times larger than Goa; Uttar Pradesh, in terms of population is 300 times bigger than Sikkim; the density of population varies from 13 per square km in Arunachal Pradesh to 901 in West Bengal. The State with the highest net state domestic product (NSDP) in Maharashtra is 284 times higher than that of the state of Sikkim. There are significant variations in per capita income as well. In 2000-01, Goa, a small state on the western coast has per capita NSDP of ` 44613 which is almost 9 times that of Bihar with ` 4813. Thus, we see that the federating units, in India, are widely different in population, in size, in resources, in sources of income, in per capita income, in domestic product, and in the level of development.

By way of conclusion, it is important to state that India is a federal country, a federation in structure. Dr. B.R. Ambedkar explained the federal case of India, saying:

(a) The Constitution provides for a dual polity;

(b) The States have not been created by the Union Government but owe their existence to the Constitution;

(c) The States derive their authority and power from the Constitution;

(d) The Constitution itself, provides a list (i.e. the State List) of subjects over which they have the power to make laws;

(e) The State governments have to remain in existence by the authority of the Constitution itself;

(f) The Union government cannot and in fact, has no authority to eliminate any State from existence. In S.R. Bommai v. Union of India (1994), the Supreme Court had observed: “The fact that under the scheme of our Constitution, greater power is conferred upon the Centre vis-a-vis the States does not mean that the States are mere appendages of the Centre. The States have an independent constitutional existence. They are not satellites or agents of the Centre. In the sphere allotted to them, the States are supreme. Let it be said that the federalism in the Indian Constitution is not a matter of administrative convenience, but one of the principle—the outcome of our own process and a recognition of the ground realities”.