Continued Expansion of the British Empire 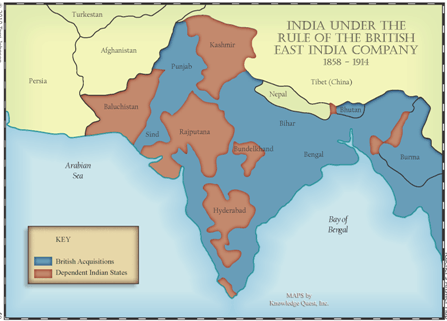 Even after the settlement of 1818 , some parts of the subcontinent remained out of British control. These included the Himalayan states to the north, the valley and hill tracts of Assam to the east, and a block of territory in the northwest covering the Indus valley, the Punjab, and Kashmir. To the south Ceylon was already occupied by the British, but to the east the kingdom of Burma straddled the Irrawaddy River.

The Himalayan states included Nepal ruled by the Gurkhas, as well as Bhutan, and Sikkim. Nepal and Bhutan remained nominally independent throughout the British period, though both eventually became British protectorates-Nepal in 1815 and Bhutan in 1866. Sikkim came under British protection in 1890; earlier it had ceded the hill station of Darjeeling to the British. The British claimed that they were forced to take the valley and hill tracts of Assam under protection in order to save them from attack by Burmese. Beginning in 1836, the Indian tea plant was cultivated in this region, after the failure of Chinese imported ones, and thus the foundations of the great Indian tea industry were laid.

In the early 19th century the Burmese were in an aggressive mood, having defeated the Thais (1768) and subjected Arakan and hill states on either side of the river valleys. Attacks on British protected territory in 1824 started the First AngloBurmese War (1824-1826), which, though mismanaged, led to the British annexation of the coastal strips of Arakan and Tenasserim in 1826. The Second Anglo-Burmese War (1852) was caused by disputes between merchants (trading in rice and teak timber) and the Rangoon governor. The Governor-General, Lord Dalhousie, intervened, annexing the maritime province of Pegu with the port of Rangoon in a campaign-this time well-managed and economical. Commercial imperialism was the motive for this campaign.

To the northwest, British India was bounded by the Sikh kingdom of Ranjit Singh, who added the vale of Kashmir and Peshawar to his state in 1819. Beyond Punjab the situation was confused, with the Afghan monarchy in dissolution and its lands parcelled between several chiefs, and Sind, controlled by a group of emirs, or chiefs. British indifference changed to action in the 1830s, owing to the reported advance of Russia in central Asia and to that nation’s diplomatic fight with the then British Foreign Secretary Lord Palmerston (who later also served as Prime Minister) regarding its influence in Turkey. Afghanistan was seen as a point from which Russia could threaten British India or Britain could embarrass Russia. When Lord Auckland was sent as governor-general in 1836, he was tasked with taking steps to forestall the Russians.

This situation led to the Afghan adventure and the First Anglo-Afghan War (1838-1842). The method adopted was to restore Shah Shoja, the exiled Afghan king, then living in the Punjab, by ousting the ruler of Kabul, Dust Muhammad. Ranjit Singh cooperated in the enterprise but cleverly avoided any military commitment, leaving the British to bear the whole burden. The route of invasion lay through Sind, because of Sikh occupation of the Punjab. The emirs’treaty of 1832 with the British was brushed aside, and Sind was forced to pay arrears of tribute to Shah Shoja. At first things went well, with victories and the occupation of Kabul in 1839. But the British found that Shah Shoja was too unpopular to rule the country independently; the British restoring force thus became a foreign occupying army-detested by the libertyloving Afghans-and was regularly engaged in putting down sporadic tribal revolts. After two years a general revolt in the autumn of 1841 overwhelmed and virtually annihilated the retreating British garrison. Meanwhile, the Russian menace in Eastern Europe had receded.

Under Auckland’s successor, Lord Ellenborough, Kabul was briefly reoccupied and sacked by means of a converging march from Kandahar in the south and Jalalabad in the east and a return through the Khyber pass. In this way the British satisfied their honour and glossed over the fact that Afghanistan had defeated them (as it would vanquish even Russia and the USA later). Shah Shoja was shortly thereafter murdered. The episode demonstrated, at a heavy price in terms of money and human suffering, both the ease with which Afghanistan could be overrun by a regular army and the difficulty of holding it. The enterprise, though originally justified as an insurance against Russian imperialism, was ultimately itself a species of imperialism. Economic difficulties combined with the strength of Afghan resistance to put a limit on British expansion in this direction.

After the Afghans it was the turn of Sind to face British expansionism. The emirs of Sindh were a group of related chiefs who had come to power in the late 18 th century and had kept the country in poverty and stagnation. A treaty with them in 1832 threw the Indus river open to commerce but not to the passage of armed vessels or military stores; at the same time, the integrity of Sind was recognised. Thus, Lord Auckland’s march through Sind was a clear violation of a treaty signed only seven years earlier. The emirs were justifiably also concerned about the turn of events in Afghanistan and this produced a final breach with the British.

On charge of the unfriendly and hostile attitude displayed by the emirs during the First Anglo-Afghan War, Karachi, occupied in 1839, was retained by the British. Further demands were then made by the British while the moderate resident James Outram was superseded by the militant general Charles James Napier to facilitate more aggressive action. The resistance this provoked was crushed at the Battle of Miani in 1843. Sind was then annexed to the Bombay Presidency; after four years of rough-and-ready rule by Napier, its economy was put in some order by Sir Bartle Frere.

After the takeover of Sindh, Punjab, the single-handed creation of Ranjit Singh, was the only major state left outside British influence in north India. The Sikh movement in the course of the 18 th century had changed from a religious to a political movement and was initially directed mainly against the Mughal imperial authority. Guru Gobind Singh’s death in the early 18th century was followed by a peasant revolt led by Banda Bahadur. The Mughal empire faced a very difficult situation to retain their hold over the province. Banda’s execution in 1715 gave the Mughals a temporary respite. However even after this setback, the Sikhs organised themselves into small and highly mobile bands, called jathas and posed a serious challenge to the Mughal imperial authority.