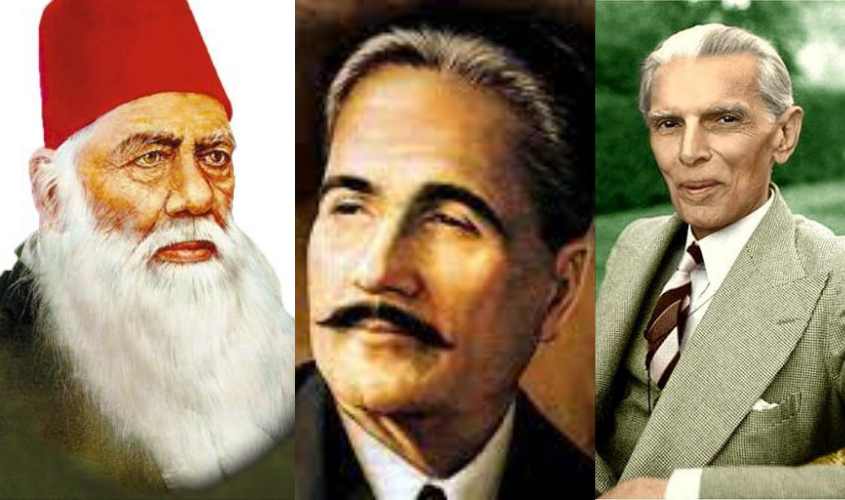 A Muslim reformer, an educationist, scholar “India is our homeland and we settled down here like the earlier immigrants. Thus India is the home of both of us (the Hindus and the Muslims). We both breathe the air of India and take the water of the holy Ganga and the Jamuna. We both consume the products of the Indian soil. We are living and dying together. By living so long in India, the blood of both have changed. The colour of both have become similar. The faces of both, having changed, have become similar. The Hindus have acquired hundreds of things from the Mussulmans. We mixed with each other so much that we produced a new language-Urdu, which was neither ours language nor theirs.”

A Gujarati Shia by birth and an advocate by profession; one time close to Dadabhai Naoroji, a Congress man initially had joined the Muslim League; wanted to be a Muslim Gokhale; the author of the two-nation theory and the architect of Pakistan. “The Hindus and the Muslims belong to two different religious philosophies, social customs and literatures. They neither intermarry nor interdine together and, indeed, they belong to two different civilizations which are based mainly on conflicting ideas and conceptions. Their aspects on life and of life are different. It is quite clear that the Hindus and Musalmans derive their inspiration from different sources of history. They have different epics, different heroes, and different episodes. Very often the hero of one is a foe of the other and, likewise, their victories and defeats overlap. To yoke together two such nations under a single state, one as a numerical minority and the other as a majority, must lead to growing discontent and final destruction of any fabric that may be so built up for the government of such a state….”

“Musalmans [in India] are not a minority as it is commonly known and understood….. Musalmans are a nation according to any definition of a nation, and they must have their homelands, their territory and their state. We wish to live in peace and harmony with our neighbours as a free and independent people.”