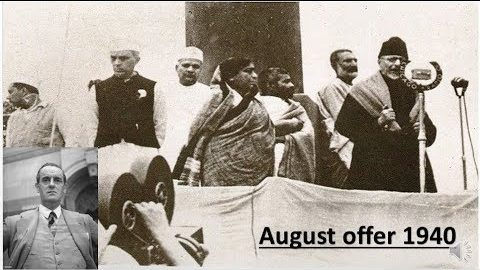 On August 8, 1940 Linlithgow, the Viceroy, issued a statement known as the “August Offer”. This statement of the Viceroy was, in fact, a declaration of British policy towards India and her immediate constitutional proposal. The offer constituted a diplomatic move of the British to mobilise the Indian resources for the support of the British Government in the war. But the Offer failed to achieve the desired objects and met with a strong opposition from all quarters in the country.

The most important features of the “August Offer” were the following:

(a) The statement promised the establishment of a fullfledged responsible government in India on the Dominion model after the termination of the war in progress.

(b) It recognised, for the first time, the right of the Indians to frame their constitution subject to certain obligations like the incorporation of provisions for the due discharge of British obligations towards defence services, minorities, treaties with state rulers, etc.etc.

(c) To assure the minorities that no constitution would be framed without their consent, the statement laid down that “it goes without saying that they (the British Government) could not contemplate the transfer of their present responsibilities for the peace and welfare of India to any system of government whose authority is directly denied by large and powerful elements in India’s national life. Nor could they be parties to the coercion of such elements into submission to such a government.” In other words, this statement gave an assurance to the Muslim League that British Government would not accept any constitution to which the League was opposed.

(d) It was also laid down in the statement that constitutional issues could not be resolved at “a moment when the national life was engaged in a struggle for existence.” However, after the conclusion of the war, a constitution making body would be set up to devise the framework of the new constitution.

(e) As an interim measure for the duration of war, the Viceroy would invite ‘a certain number of representative Indians to join his executive council and to establish a war advisory council.

(f) The British Government hoped full co-operation from all the parties and communities of India necessary for the attainment of free and equal partnership in the British Commonwealth of Nations.

A careful and critical analysis of the Viceroy’s statement, however, reveals that the August Offer was both unsatisfactory and disappointing. A month later presiding over the All India Congress Committee meeting in Bombay. Maulana Azad declared that the Viceroy’s offer was not worth looking at. The “August Offer” was mischievous in the sense that it conceded, in a way, the League’s demand for Pakistan, It gave an assurance to the Muslims of India that no future constitution, interim or final, would be adopted by the British Government without their approval and consent. So the British ‘Offer’ found favour with the Muslims of India who kept mum over the statement of 1940. The August Offer, however, failed to achieve its object. It could neither afford satisfaction to the people nor did it succeed in gaining the Indians’ co-operation in the war. On the other hand, it precipitated the crisis between the Congress and the Government and also between the Hindu and the Muslims.

After the failure of the August Offer, 1940, for some form of protest against the British attitude was strongly felt among the Congress leaders. But under the circumstances, no one could easily point out the right course of action to be adopted. All eyes then turned to Gandhiji who gave at this movement a unique proof of his wisdom and moderation. A firm believer of non-violence, he did not approve the idea of launching an extensive and anti-war movement. Nor did he like to embarrass the British who were then engaged in a life and death struggle. However, to register a moral protest against the British attitude, he thought Satyagraha as the best course of action. According to the new programme, the men and women of India were to protest individually against dragging India into the war and the Governmental attack on the right of speech. They were to dissociate themselves from the war efforts publicly and court arrest.

Vinobha Bhave was selected as the first individual satyagrahi or civil resister to war. He delivered an anti-war speech at a small village near Wardha and was arrested on the charge of sedition. After him Jawaharlal Nehru was made a prisoner in October, 1941. Arrests followed in quick succession and by the end of the year all leading Congressmen were behind the walls. Besides, the military censorship of press was instituted and the publication of any matter connected with the movement was prohibited. But all these repressive measures failed to discourage the satyagrahis whose number rose to 30,000 . By the end of 1940, 11 members of the Congress Working Committee, 176 members of All India Congress Committee, 29 former Ministers and over 400 member of the provincial and central legislatures were also in jail. Reinforced by the subsequent developments of war, it soon became a matter of concern for the British. The outcome was the despatch of Cripps Mission to break the political deadlock.