Economic, Social and Political Conditions in the Post-Mauryan Period 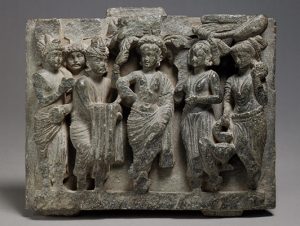 The fruits of opening new regions to trade and agriculture during Mauryan times came to be realised during the post Mauryan period. The Mauryan rule was significant for disseminating knowledge regarding the use of coins and advanced knowledge of iron making technology in the peripheral areas outside the pale of Brahmanical culture. This paved the way for the rise of a large number of towns and popular use of currency, which in turn, facilitated internal transactions as well as promoted foreign trade with Central and South-East Asia and also with Rome. This period is also notable for the formation of large number of guilds of artisans and merchants, as suggested by the inscriptions.

The social and religious structure of the post-Maurya period was characterised by Brahmanism (of the indigenous ruling houses of the Shungas, Kanavas and Satavahanas) and the foreign rulers (such as the Indo-Greeks and Kushans) and Buddhism, which became popular. Land grant had to be made to both Brahmins and Buddhists. Brahmanism received a major thrust with the completion of the legal treatise of Manu which legitimised the wide propagation of the caste system.

Satavhanas and Kushanas were the only two large kingdoms that established feudatory relations with smaller kings. Such an organisation was required by the Satavahanas who were probably improvised brahmins ruling over semi or nonbrahmanised chiefs of the Deccan. For the Scythians who came from the central Asia, this was all the more natural and the titles adopted by the Kushana kings indicate the existence of many lesser kings paying homage and tribute and rendering military service to the paramount power. A second factor leading to decentralisation was the grant of fiscal right to the Buddhist and Brahmin beneficiaries. Villages receiving such grants enjoyed concessions which included exemption from the entry of royal agents, policemen and soldiers. To this extent the beneficiaries were free to manage village affairs and to maintain law and order there, thus forming semi-independent administrative pockets in the countryside.

Existence of autonomous governments in at least a dozen cities of north India was a significant aspect of the post-Mauryan polity. The native guilds of traders of these cities issued coins. The business of government was carried on either by a single corporation or a joint body of corporations of artisans and merchants in the cities of Taxila and Kaushambi. These towns lost their autonomous character with the establishment of the Satavahana and the Kushana kingdoms but their civic life did not lose its vigour. The rulers had to reckon with merchant corporations in the towns of the Deccan and with the guilds of artisans in the Kushana territory, although clear proof of the participation of merchants in town administration is lacking.

The old centralised system of administration continued at several points and was even strengthened by the adoption of new elements. The Satavahanas divided the kingdom into aharas and placed them under charge of royal officers as was prevalent during the Ashokan system of administration. The system of taxation was simple and tax was collected in cash as the discovery of large number of coins suggests. Militarisation of government, both in the Satavahana and the Kushana dominions, was an important development of the period. An ahara was placed under a mahasenapati and a village under a gaulmika, head of a small military unit. Divinity in kinship was a typical feature of the period. Inscriptions show that the Satavahana rulers were being compared to gods and the Kushana rulers claimed the status of being devaputras – sons of the god. They also started the practice of deification of the dead kings. The coins of some of the tribal republican states reveal that they were supposed to be headed by their gods in whose name the coins were issued. The state was no more treated as an item of property of the king or the ruling class. This helped in maintaining the old centralised system but there were fewer officials to promote it, like the Mauryas had. Most economic activities now carried on by guilds. A good part of the administration was handled by these guilds of merchants in the urban areas and religious beneficiaries in the villages. Several elements of decentralisation were seen in the Shaka-Satavahana polity which paved the way for the feudalism during the Gupta period.