Development of crafts in ancient India 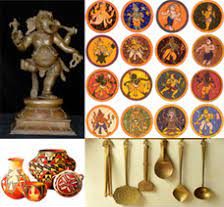 Archaeological evidences and literature indicate that textile production is an ancient Indian art, possibly dating from periods even earlier than the Harappan civilisation, 5,000 years ago. Textiles can be broadly divided into those fabricated from cotton, wool and silk. Cotton and wool seem to have been used throughout Indian history, beginning from the time of the Harappan civilisation. Indigenous silk was produced by the tribes of the north-eastern states, Bihar and Orissa. These tussar and moonga silks in natural un-dyed hues of gold, have their own distinct textures. Metallurgy is yet another ancient Indian craft, again beginning with the Indus Valley Civilisation, nearly 5,000 years ago. The art of production of metal utensils, pots and pans required the preparation of metal sheets that could be welded together and beaten into shape. In rare cases, as in the production of the Kerala urli, these huge cooking vessels were cast in a mould using the lost wax process.

In the post Mauryan period, jewellery making, sculpture, textile making, making of leather products, metal working, were the main handicrafts that were also affected by foreign influences associated with various invaders and assimilated in Indian craftsmanship. The Sangam classics written refer to the weaving of silk and cotton cloth. Weavers were already a recognised and established section of society with separate streets for them named karugar vidi or aruval vidi. In both the Chola and Vijayanagar empires (ninth to twelfth century) the weavers lived around the temple complex, weaving fabrics to dress the idols, drape as curtains, and clothes for the priests and the local people, as well as to cater to trade from across the sea.

The manufacture of textiles was concentrated in three areas: western India, with Gujarat, Sindh and Rajasthan as its focus, South India, in particular the Coromandel Coast and eastern India including Bengal, Orissa and the Gangetic plain. Each of these areas specialised in producing specific fabrics and specific motifs. There is evidence that various forms of economic organisation and methods of integrating craft production into the macro-system of the economy existed at different points in Indian history.

The Arthashastra makes a distinction between two types of artisans: the master craftsperson who employed a number of artisans on a wage to do the actual work for the customer and the artisans who advanced themselves, and worked in their own workshops. Artisans were remunerated either in kind or in cash. Nevertheless, in those areas where the use of money had not been introduced, service relationships and exchanges in kind may have existed. It is likely that the Jajmani system evolved from these service relations.

Shrenis have been mentioned in a wide variety of sources like the Ramayana, plays from the Gupta period as well as the Tamil Sangam literature. These were professional bodies of jewellers, weavers, ivory carvers, etc. who came together to control quality production, create a sound business ethics, maintain fair wages and prices, sometimes operated as a cooperatives and controlled the entry of newcomers by laying down high standards of craftsmanship and enforcing rules regarding apprenticeship.

Crafts and the Emergence of the Jajmani System

In many parts of India the jajmani system defined most of the transactions in the craft sector. The jajmani system is a reciprocal arrangement between craft producing castes and the wider village community, for the supply of goods and services. The caste system did not permit the upper castes to practise certain occupations. As a result the patrons or jajman were dependent on purjans (cultivators, craftsmen, barbers, washermen, cobblers, sweepers) to provide essential goods and services for the village/ urban economy. In return a fixed payment in kind was assured. This could be rent-free land, residence sites, credit facilities, food or even waste materials like cow dung. Since most upper caste people owned land, the jajmani system provided them with a stable supply of labour.

Among the most renowned monuments of ancient India are many cave temples hewn from rock. Rock-cut architecture involves the creation of a structure by carving it out of solid natural rock often on mountain sides or in hills. Rocks that will not form part of the structure is removed until only that rock left is that which will constitute the structure. Indian rock-cut architecture was popular from ancient India itself and was mostly religious in nature.

There are more than a thousand rock cut structures in India. Many of these structures contain artworks of global importance and are ornamented with exquisite stone carvings. These ancient and medieval structures are amazing achievements of structural engineering and craftmanship.

The most important of these were the Ajanta caves, which are Buddhist rock-cut cave temples and monasteries, located near Ajanta, that are celebrated for their wall paintings. The temples are hollowed out of granite cliffs on the inner side of a 20-metre ravine in the Wagurna River valley, 105 km northeast of Aurangabad, at a site of great scenic beauty.

The group of some 30 caves was excavated between the 1st century B.C. and the 7th century A.D. and consists of two types, caityas and viharas. Although the sculpture, particularly the rich ornamentation of the caitya pillars, is noteworthy, it is the fresco-type paintings that are the chief interest of Ajanta. These paintings depict colourful Buddhist legends and divinities with an exuberance and vitality that is unsurpassed in Indian art. The caves were designated a UNESCO World Heritage site in the year 1983.

Ellora Caves are a series of 34 magnificent rock-cut temples. They are located near the village of Ellora, 80 km southwest of the Ajanta Caves. Spread over a distance of 2 km, the temples were cut from basaltic cliffs and have elaborate facades and interior walls. The Ellora complex was also designated a UNESCO World Heritage site in the year 1983.

The most remarkable of the cave temples is Kailasa, named for the mountain range. Unlike other temples at the site, which were first delved horizontally into the rock face, the Kailasa complex was excavated downward from a basaltic slope and is therefore largely exposed to sunlight.