Art in the Mauryan Period 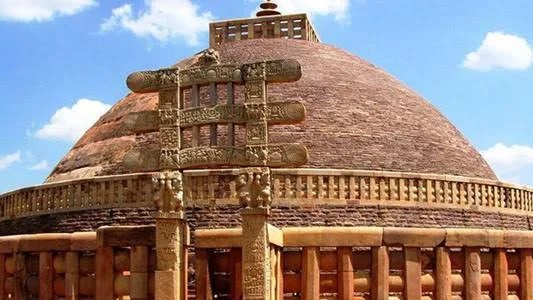 In addition to the stone sculpture known from the Mauryan period there seems to have been a developed tradition of wood working in ancient India. Unfortunately wooden artefacts decay easily and have not survived the ravages of time. We can only form an idea of the craft on the basis of the stone sculpture and architecture that we can see till the present day.

Mauryan art is divided into indigenous art and official or court art. The best examples of indigenous art two free standing stone figures – a yaksha image from Parkham and a yakshi sculpture from Besnagar. These figures are of archaic aspect and designed from a frontal view-point. A more perfect example of this style is the figure of a large female cowri-bearer from Patna. A fourth specimen is represented by a male yaksha. Though the original figure must have been over twelve feet in height, only the upper part of the figure survives today. This group of sculptures shows that the indigenous school was well developed and established by the Mauryan period.

Official art under Ashoka is represented by the monolithic pillars on which the king’s edicts were engraved. These pillars are the finest examples of highly developed technique in the cutting and polishing of the surface of the stone. The shine and finish imparted to the stone can still be seen and is a hallmark of Maurya art. The capital of these pillars were realistically modelled and consisted of groups of animals. The finest extant example is that of the pillar at Sarnath. It consists of four adorned lions which originally supported a dharma-chakra. These rest on an abacus bearing in relief an elephant, a horse, a bull and a lion separated by four small dharma-chakras. Another remarkable animal figure of the Mauryan period is the elephant at Dhauli. However, it belongs to a very different tradition and has little in common with the animal capitals. The main purpose of the elephant emerging from the rock was probably to draw attention to the inscription nearby. Two types of stone were used for Mauryan pillars – the spotted red and white sandstone from the region around Mathura and the buff-coloured chunar sandstone obtained from the region around Varanasi. There is uniformity in the pillar capitals suggesting that they were all sculpted by craftsmen belonging to the same region. As a result of improved communications between different parts of the sub-continent, it is likely that the stone was transported from Mathura and Chunar to the various sites where the pillars were then cut and sculpted by the craftsmen. A majority of the Ashokan pillars occur in the Ganga basin. An interesting exception is the pillar from Amaravati in Andhra.

It is made of locally available quartzite and seem to have been cut, shaped modelled and even polished locally. Some scholars argued that the Mauryas employed craftsmen who worked in stone. In support of the presence of foreigners, they give the example of the governor Tusappa who is referred to as a yavana. It is surprising, however, that if Persian craftsmen had settled in the Mauryan empire they did not produce many more objects of Achaeminid origin. Very few of these have been found so far.

Ashoka is credited with the construction of a large number of stupas. Several caves were excavated by the Mauryas in the Barabar hills, Bihar for use of the Ajivikas. These were all exquisitely finished and polished like glass on the inside. What is fascinating is the extent to which these caves, cut into hard rock, imitate contemporary wooden structures. The entrance to the Lomash Rishi cave is complete imitation of wooden forms.

In addition to the architectural remains, a large number of fragmentary sculptures are also dated to the Mauryan period. Most of these are heads, presumably of donor figures. What is striking about them is the range of head-dress depicted and the individuality of the expression. The material used is mainly polished buff sandstone. No less important is a group of terracottas which have been found at several Mauryan sites during archaeological excavations. These are usually made from moulds and one of them depicts a standing female divinity with an elaborate coiffure. This figure has been identified as a mothergoddess associated with fertility. Terracotta was also used for making toys and these consist mainly of wheeled animals, a favourite being the elephant.

Most Ashokan inscriptions were composed in Prakrit language, and written in the Brahmi script throughout the greater part of the empire. But in the north-western part of the subcontinent they appear in Kharosthi script, and in Kandhar in Afghanistan they were written even in Aramaic, in Greek script and Greek language. These inscriptions were generally placed on ancient highways.

The Prakrits ( Sanskrit for ‘natural’) are vernacular dialects of classical Sanskrit (meaning ‘perfected’), which came into use by the 6th century BC. They were grammatically simpler than Sanskrit, hence their popularity among the masses. The higher status of Sanskrit compared to Prakrit was apparent in Sanskrit dramas, where Sanskrit was spoken by upper class characters, while Prakrit was spoken by lower class characters. Pali, the language of the Buddhists and their sacred literature, is a Prakrit. So is Magadhi, the language of the Magadha Kingdom. Later Indian languages such as Hindi, Punjabi and Bengali are believed to have descended from the Prakrits. The dialects are classified under Middle Indic languages, while Sanskrit is considered Old Indic.

Brahmi is the earliest known script used for writing Sanskrit. It originated in the 5 th century BC and was used by Ashoka, to inscribe his edicts on stones and pillars in the kingdom. Brahmi is a ‘syllabic alphabet’, which means that each character is made up of a consonant as well as a neutral vowel. In Brahmi, the same consonant is used with extra strokes in combination with different vowels.