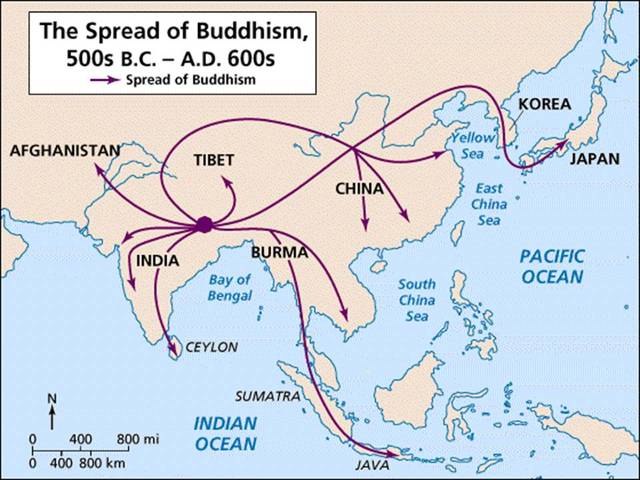 Kumarajeeva was the first to introduce Buddhism in China; Vyayasinghava was the first to do so in Ceylon and Padmasambhava the first in Tibet. Ashoka sent his own children, his son, the monk Mahendra and his daughter, the nun Sanghamitra to Ceylon. Accompanied by the sthaviras Rishtriya, Utriya, Shambala, and Bhadrasara, they were welcomed by the king of Ceylon, Devanampiya Tissa, who with his people was ultimately converted, and who, founded in honour of the evangelists, the great vihara, thenceforward the headquarters of Sinhalese Buddhism.

To Kashmir and Gandhara was sent Madhyantika, and to the Yavana or the Greek country (Bactria), Maharakshita; the apostles Mahadeva (Mahishamandala), Rakshita (Vanavasa), Dharmarakshita (Aparantaka) a yavana, and Mahadharmarakshita (Maharashtra) made their way to southern India to propagate Buddhism. Some other notable events in the expansion of Buddhism were:  Kanishka  the greatest of Kushanas, chief patron of fourth Buddhist council, made Buddhism popular in central Asia. ?

Buddhism developed into one of China’s three most important religions, alongside Taoism and Confucianism. Buddhist gods came to be worshiped in Taoist temples and vice versa, and in some temples, the three religions were practised side by side. The Mahayana Buddhism practised in China was an elaborate form of the religion, with more gods and myths than the Theravada Buddhism.

In the A.D. 600, questions arose about certain Buddhist teachings, so a monk named Xuan Zang (also called Tripitaka) went to India to obtain copies of official scriptures. An account of his legendary trip was published in the 1500s as Journey to the West. In the story, the monkey god Sun Wukong and the pig god Zhu Bajie joined Xuan Zang on his journey. During the 14-year expedition, the three travellers had to endure many ordeals and tests of their sincerity, including fighting demons and monsters with the help of a magic stick.

Chinese Buddhists established a complex hierarchy of gods and goddesses. One of the more important deities was Shang Di, whose main assistant, Dongyue Dadi, was known as the Great Emperor of the Eastern Peak. Under him were various departments where the souls of virtuous people worked to manage every aspect of human and animal life. Some of the other important Buddhist gods were the Four Kings of Heaven, the Four Kings of Hell, and the Kitchen God, the most important deity of the home.

Another major deity was the bodhisattva Mi-le (known in India as Maitreya), considered to be the future Buddha. Portrayed as a fat, cheerful man, Mi-Le was sometimes called the Laughing Buddha. Worshipers prayed to join him in paradise. Each district in China had its own local deity, as did all activities and ways of making a living. Even the smallest details of life were controlled by various minor gods and goddesses.

Buddhism came to Japan in about A.D. 550 and spread quickly because of support from the Japanese royal family. Although supporters of Shinto, the native religion of Japan, at #rst opposed Buddhism, the two religions eventually became closely linked. Buddhist temples contained Shinto shrines, and Shinto gods (known collectively as kamt) became Buddhist guardians. This mix of Shintoism and Buddhism continued until 1868, when the emperor declared Shinto a state religion and banned Buddhist priests and images from Shinto temples.

Yet Buddhism remained popular and still has a larger following in Japan than does Shinto. Although the various forms of Japanese Buddhism include religious ideas from India and China, they also developed their own mythologies and pantheons. One of the main deities is Amida (known in other Buddhist regions as Amitabha), ruler of a paradise called the Pure Land. He is worshiped by some Japanese sects as the saviour of humankind. Kannon—a bodhisattva known elsewhere as Kuanyin and Avalokitesvara— is the protector of children, women in childbirth, and dead souls. Another popular deity, the bodhisattva Jizô, protects humans and rescues souls from hell.

He is often described as a gentle monk who wanders through the land of the dead bringing light and comfort to the souls imprisoned there.

Buddhism reached Tibet from India in the A.D. 600 and gradually absorbed native religious practices, creating a unique form of Buddhism. Tibetan Buddhists worship many groups of Buddhas, gods, and bodhisattvas. They also believe in the existence of numerous demons and evil spirits. According to Tibetan Buddhists, the world goes through an endless cycle of creation and decay, and a new Buddha appears in each world age to teach Buddhist principles. Legend says that one of these Buddhas, Amitabha, ordered a bodhisattva named Avalokitesvara to bring Buddhism to Tibet.

At the time, only animals and ogres lived there. Avalokitesvara thus produced a monkey and sent it to meditate in Tibet. The monkey was approached by a female ogre in the form of a beautiful woman, who offered to be his wife. The two had children, but they were covered with hair and had tails. Avalokitesvara sent the children to a forest to mate with other monkeys. He returned a year later and discovered many offspring. When Avalokitesvara gave these creatures food they turned into human beings, and he was then able to convert them to Buddhism.

Doctrinally Tibetan Buddhism is based mainly on the rigorous intellectual disciplines of Madhyamika and Yogachara philosophy and utilises the tantric ritual practices that developed in Central Asia and particularly in Tibet. Tibetan Buddhism also incorporates the monastic disciplines of early Theravada Buddhism and the shamanistic features of the indigenous Tibetan religion, Bon.

Some characteristics of Tibetan Buddhism are