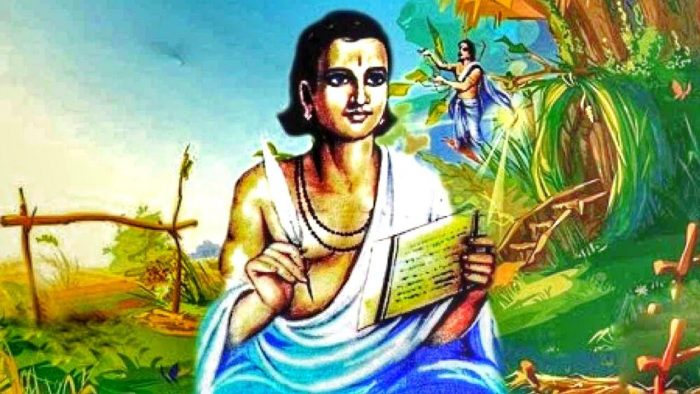 This period is particularly notable for Kalidasa, the poet and dramatist, probably the greatest Indian writer of classical epoch. Legend has it that Kalidasa was one of the “nine gems” at the court of the king Vikramaditya of Ujjain. A widely accepted view of scholars is that Kalidasa should be associated with Chandra Gupta II. The most convincing but a speculative rationale for relating Kalidasa to the Gupta dynasty is simply the character of his work, which appears as both the perfect reflection and the most profound statement of the cultural values of that serene and refined period.

Tradition has associated many works with the poet; scholars, attribute at least six as genuinely by Kalidasa. Kalidasa has become the archetype for Sanskrit literary composition.

In drama, his Abhijnanashakuntalam is the most famous and is usually judged the best Indian literary effort of any period. As in all of Kalidasa’s works, the beauty of nature, depicted with a precise elegance of metaphor, is unmatched in any of the world’s literatures. The second drama, Vikramorvashi tells a legend as old as the Vedas though very differently. The third of Kalidasa’s dramas, Malavikagnimitra, is of a different genere – comical and playful, but not any less an accomplishment. The play also contains datable references, the historicity of which have been much discussed.

Kalidasa’s efforts in karya are of uniform quality and show two different subtypes, epic and lyric. Examples of the epic are the two long poems Raghuvamsha and Kumarasambhava. Meghadoot, is a lyric poem which contains, interspersed in a message from a lover to his absent beloved, an extraordinary series of unexcelled and knowledgeable vignettes, describing mountains, rivers, and forests.

The society reflected in Kalidasa’s work is that of a courtly aristocracy sure of its dignity and power. Kalidasa did more than any other writer to wed the older, Brahmanic religious tradition, particularly its ritualistic concern with Sanskrit, to the needs of a new Hinduism.

Abhijnana Shakuntalam (Recognition of Shakuntala), is recognised as a classic of world literature. It borrows the character of Shakuntala, from the Mahabharata but develops it in a completely different way from the epic, dealing instead with delicacy and romance, anguish, pathos and happiness, culminating in a happy ending. The play relates the story of Shakuntala, who lives
in a hermitage and captures the heart of King Dushyanta while he is out hunting in the forest. They get married, but the king eventually leaves her to return to his palace. Before departing, he presents her his royal ring promising that he will return soon.

Shakuntala spends the ensuing days pining for the king. In one of her dreamy states, she offends a visiting sage who curses that the person Shakuntala was thinking about would forget her. Later, he softens the curse by pronouncing that the king would remember her if he saw the ring. When Shakuntala discovers that she is expecting the king’s child, she sets out for the palace but loses the ring while bathing in a lake. The king, without the evidence of the ring, does not remember her, and she returns forlorn to the forest where she delivers a baby boy. Years later, the king encounters the ring when a fisherman finds it inside a fish and presents it to him. The king instantly remembers Shakuntala and returns to the forest where he is reunited with her.