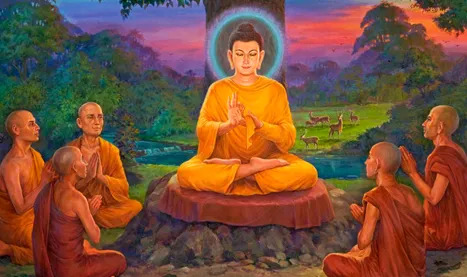 Everyone in life is subject to suffering and frustration.  The cause of this suffering and disease is desire – craving, lust, attachment to people and things, even to life itself. To escape from suffering, humans must liberate themselves from all desire and craving, and break all the chains of attachment. The way to do this is by following the Noble Eight-fold Path is alone can lead to nirvana, the ultimate goal of all Buddhist teaching.

One of the most important Mahayana sutras for a new conception of the Buddha was the Lotus Sutra (Saddharmapundarika-sutra), in which the Buddha denies that he left the royal palace in search of freedom from suffering and that he found that freedom six years later while meditating under a tree. He explains instead that he achieved enlightenment innumerable billions of aeons ago and has been preaching the dharma in this world and simultaneously in myriad other worlds ever since. Because his life span is inconceivable to ordinary humans, he has resorted to the use of adroit methods pretending to renounce his princely life, practice austerities, and attain unsurpassed enlightenment. In fact, he was enlightened all the while yet contrived these deeds to inspire the world. In the same way, the Buddha pretends to enter nirvana to create a sense of urgency in his disciples even though his life span is limitless.

A key concept in Buddhism is nirvana. There are different aspects of the concept of nirvana.