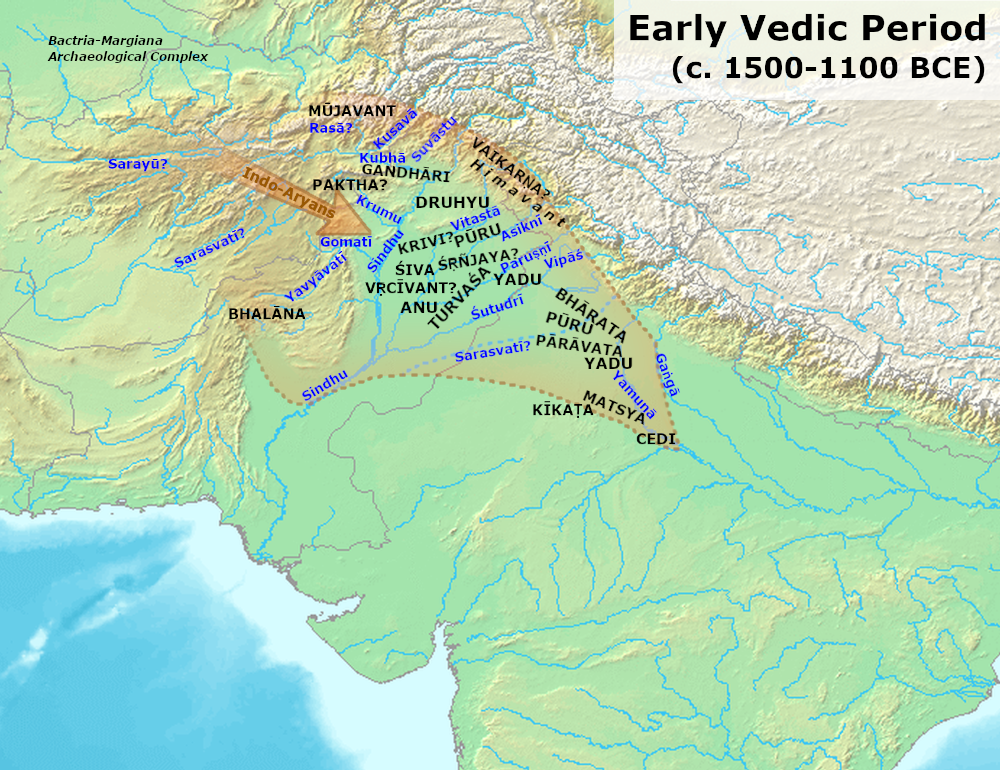 We know about the Aryans in India from the Rig Veda in which the term, ‘Arya’ occurs 36 times. It is the earliest text of Indo European languages. The Rig Veda consists of 10 mandalas of which Mandala 2 to 7 are earliest, while later additions include Mandala 1 and 10. Rig Veda and Avesta, the oldest text in Iranian language have many things in common. They use same names for several gods and social classes.

The earliest Indo-Aryans lived in the geographical area covered by Eastern Afghanistan, North West Frontier Province, Punjab and the fringes of western Uttar Pradesh. The Rig Vedic people came into conflict with the indigenous habitants called the dasas, dasyus, etc.

The Aryans were engaged in two types of conflict, viz, with the pre-Aryans and secondly among themselves. The river systems mentioned in Rig Veda were-

Amongst the Himalayas the Rig Veda talks about Mt Mujawanth known for the favourite drink of Aryans called ‘soma’.

The tribes were called jana. According to traditions the Aryans were divided into five tribes called the panchajana. The most popular tribe was Bharatas. Bharatas and Tritsus were the ruling tribes who were supported by priest Vasistha.

The Battle of Ten Kings

The king was called Rajenya (most qualified), Gopa (protector) and Ganapati (head of the tribe). He protected the cattle, fought its wars and offered prayers to gods on its behalf. Monarchies were by and large hereditary. The king was assisted by the purohit, senani and yuvraj.

Vasistha and Vishwamitra were two important priests who played a major role during Rig Vedic times. The former was a conservative while the latter was a liberal. Vishwamitra composed the gayatri mantra to increase the extent of Aryan domination. The senanis used spears, axes and swords, etc.

Bureaucracy was not well established. There was no permanent standing army and the tax system was not well developed. The Rig Veda does not mention any officer for administering justice. The king was controlled by powerful legislative assemblies, the sabha and the samitis (assembly of the elders). They exercised deliberative, military and religious functions. The Sabha represented the tribe as a whole and included women as members. e decisions of the samiti were final and binding on the king. The village, grama, was the lowest unit headed by a gramini. Groups of villages formed a vis headed by visyapati. Different blocks formed a gana or jana headed by a ganapati.

Vajrapati was the officer who enjoyed authority over a large piece of land or pasture ground. He led heads of families called kulapas or gramanis. There was no civil system or territorial administration as people were always migrating from one place to another.

Rig Veda was a patriarchal society. The father was the head of the family and was called ‘grihapati’ and dampati. Families of same blood relation formed clans called kulas headed by a kulapati.

The Varna system was the most important social development. In the first stage vernas were distinguished by complexion, dividing the society into sveta varna (Aryans) and krishna varna (non Aryans). In the second stage it came to be identified with occupation dividing the society into three varnas, viz, Brahmins, Kshatriya and Vaishyas. Shudras were very much Aryans but without a varna status. The next Purushashukta is the most important source of information on the origin of the varna system. It is a part of Chapter 10 of the Rig Veda.

The varna system was highly flexible. Changing the varna by changing one’s occupation was permitted. Inter-varna marriages, and socialising such as eating together were accepted.

There were no social evils like untouchability, dowry system, child marriages and the custom of sati. Women were given complete freedom and liberty.

The great women scholars of the Rig Vedic age were vishwavandins (Gargi, Maitreyei, Lopamudra and Javala). It was Gargi who challenged the greatest scholar of the age, Yajna Valkya. She belonged to the court of Janaka. She is mentioned in the sixth and the eighth Brahmana of the Brihad Aranyaka Upanishad, the first Upanishad to discuss the transmigration of the soul.

The economy in this age was more pastoral than agricultural. The cow was the sacred animal. The cultivated crops were godhuma (wheat), yava (barley), vrihi (rice). It was basically a village economy without much trade and commerce or cities and towns. Nishka (gold) and satamana (silver) were used for transaction.

The religion may be defined as monoism or henotheism (God is one but has many forms). According to the Rig Veda, the universe evolved out of the great sacrifice (hiranyagarbha) performed by the oldest gods, father Dayus and mother Prithvi. The universe, according to this religion, was divided into three spheres, viz celestial, arial and terrestrial. Indra the god of the celestial sphere was the most popular god, god of war and victory. He killed a demon serpent, Vritra. The maximum number of verses in Rig Veda (250 out of 1028) are about Indra.

Varuna was the god of the arial sphere, god of prosperity, ethics and values and the most sublime of all gods. He protected the world’s moral order. Agni was the god of the terrestrial sphere. His other names were Hotri (priest), Huthasama (who purifies everything), Havyavahana (god with smoke as his vehicle). He is considered the second most prominent god. 220 verses in Rig Veda are for Agni. Savitri, Mitra were names for Surya, the sun god. He is the god of cosmic energy. The most sacred mantra, Gayatri, is addressed to Savitri. It was composed by Vishwamitra and was the part of the 3rd mandala of the Rig Veda. Soma (moon) is the god of the nourishment. The entire 9th mandal of the Rig Veda is dedicated to Soma. Ashwins are the gods of herbs and medicines. Rudra was the only non-Aryan god accepted. Saraswati was the only such goddess.