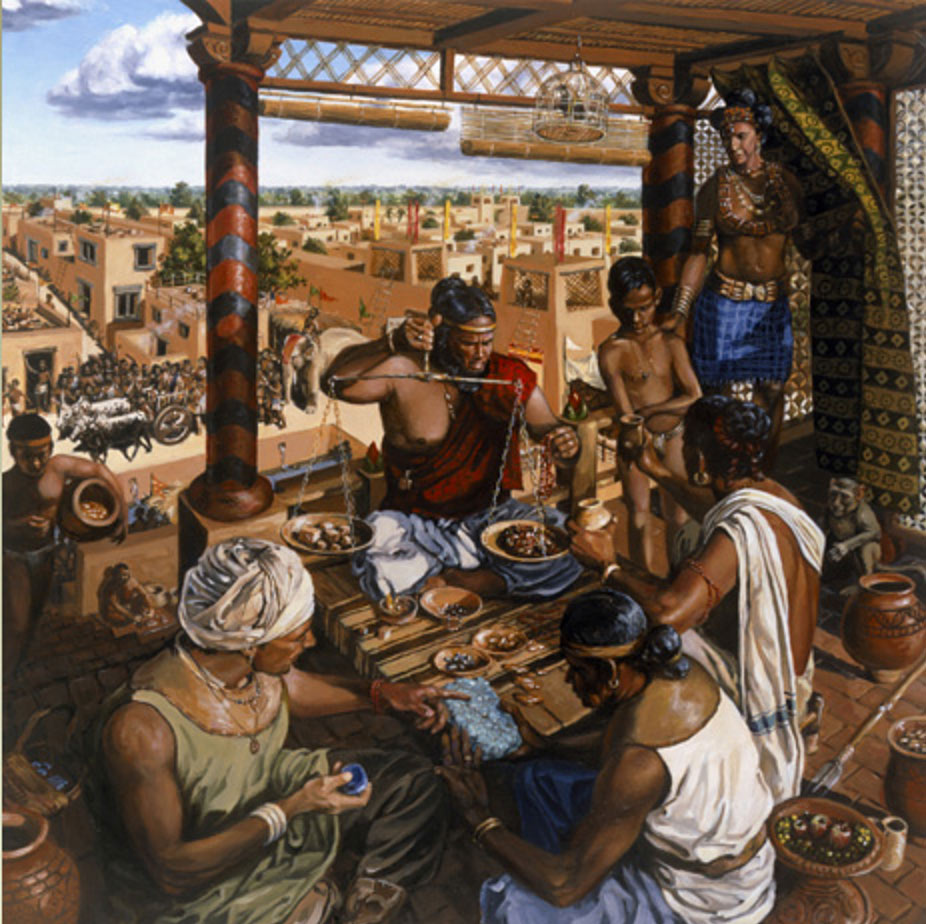 The Indus valley society was a matriarchal society. The classes comprised traders, peasantry, craftsmen and the royalty. The remarkable feature of this earliest urbanisation was its town planning, in which towns were well laid out in grid pattern. Uniformity in the size of bricks used and the underground drainage system were unique aspects. The staple food of the people of IVC were the grains of wheat and barley. Their hobbies included dicing, bull fighting, singing and dancing. They had the knowledge of all metals except iron.

Another notable feature of the society was the burial practices. Dead bodies were buried in sitting postures with head facing north. Other practices were coffin burial, pot burial or burn burial, partial burial and cist burial (brick chambered burial as found in Kalibangan).

One of the numerous terracotta figurines of women found depicts a plant growing out of the embryo of a woman. It is, most probably, to be considered an image of the mother goddess earth. Like the Egyptian’s worshipped the Nile goddess Isis, Harappans worshipped the earth as fertility goddess. There was prevalence of phallus worship and numerous symbols of phallus and female sex organs made of stone were found in Harappa.

The people of the Indus region also worshipped trees. Animals were also worshipped in Harappan times, and many of them are represented on seals. The most notable are the one horned unicorn and humped bull. But nothing can be said about the religious belief of Harappan people. Discovery of amulets suggests their belief in existence of ghosts and evil forces.

The Harappans scripts were pictographic. It is written in the boustrophedon style. Nothing can be said about their ideas and beliefs as the Harappan script has not yet been deciphered. Around 4000 specimens of Harappan writing on stone seals and other objects have been discovered. The urban people used weights and measures for trade and other transactions, as the discovery of numerous articles used for weighing suggests. Weights of mostly 16 or its multiples were used. e Harappans also knew the art of measurement.

Harappans held expertise in the use of potter’s wheel. Seals were another form of their artistic expression. The Harappan artists made beautiful images of metal, e.g., bronze dancing women, steatite statue. Terracotta art represents crude artistic forms in contrast to metals and seals. e difference in the two sets indicates the gap between the classes which used them. Anything notable in stone work is absent.

The Harappan people domesticated oxen, buffaloes, goats, sheep and pigs and regarded dogs as pets. Asses and camels were used as beasts of burden. The Harappan culture belongs the bronze age and a considerable number of bronze items have been discovered from Harappan sites, suggesting the important position that bronze smiths held in Harappan society.