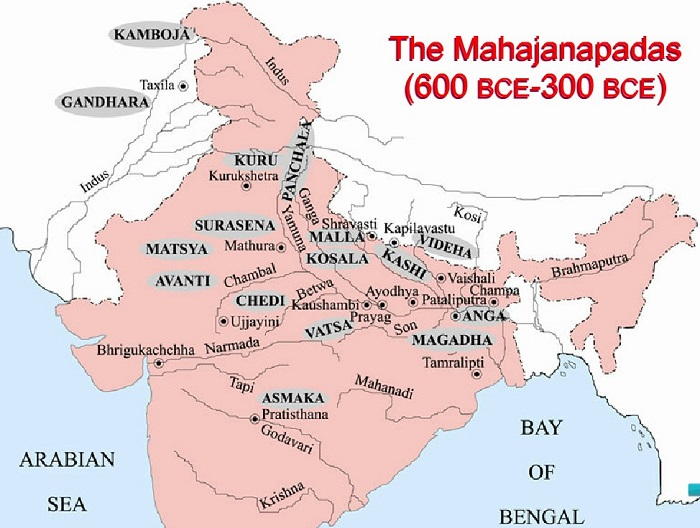 The sixth century B.C. is considered a major turning point in ancient Indian history. This was the period when early states and cities developed and it also saw the growing use of iron as well as the initial use of metal coins. It also saw considerable intellectual ferment with diverse systems of thought, including Buddhism and Jainism emerging.

Early Buddhist and Jain texts refer to sixteen states known as mahajanapadas. Although the lists vary, names such as Vajji, Magadha, Koshala, Kuru, Panchala, Gandhara and Avanti occur frequently indicating that these were amongst the most important mahajanapadas of the era.

While the mahajanapadas were usually ruled by kings, some, known as ganas or sanghas, were oligarchies, where power was shared by a small number of persons, who were collectively called rajas. Both Mahavira and the Buddha belonged to such ganas. There were a few examples where the rajas also controlled land and other resources collectively, as in the case of the Vajji sangha. While the lack of historical sources makes it difficult to reconstruct the history of these mahajanapadas it is clear that many of these states lasted for nearly a millennium.

Reflecting the urbanisation trend, the mahajanapadas had capital cities, which were often fortified. Maintaining these fortified cities as well as providing for embryonic armies and bureaucracies required substantial resources.

Sanskrit texts known as the Dharmasutras composed by Brahmanas provide some information about the mahajanapadas. They lay down norms for rulers, as well as for other social groups, who were ideally expected to belong to the kshatriya varna. The rulers were advised to collect taxes and tribute from cultivators, traders and artisans. Raids on neighbouring states were also recognised a legitimate means of acquiring wealth, indicating that it was a period of considerable warfare also. Gradually, some states acquired standing armies and were able to maintain regular bureaucracies. However others continued to depend on irregular militia usually recruited from the peasantry.