Sources of Information about Maurya Empire 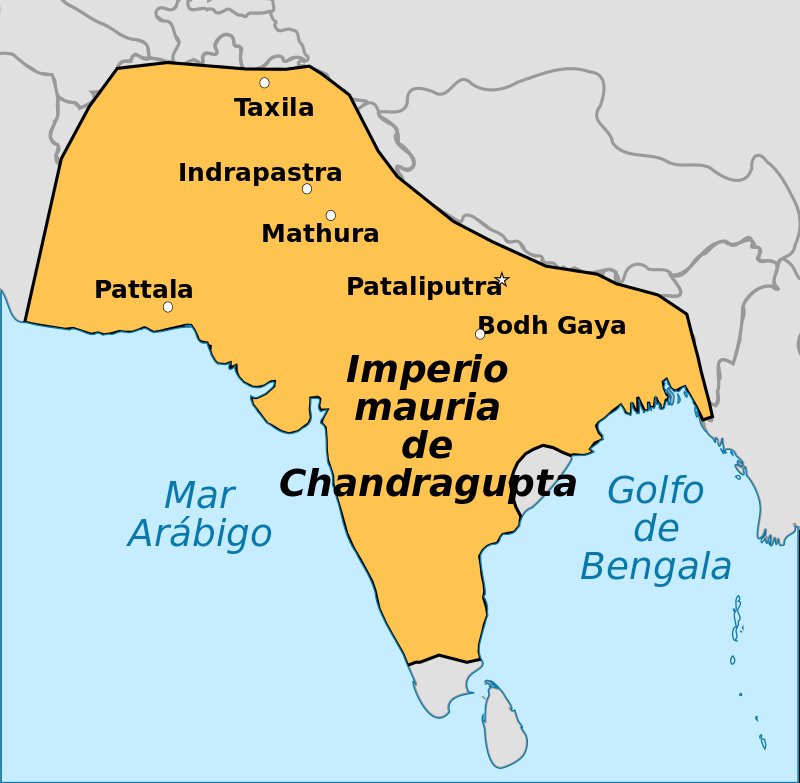 The origin of the Mauryas is little known and rather obscure. The Puranas refer to them as mainly shudras and unrighteous but this may be because of their patronage to Buddhism rather than Brahmanism. Similarly classical source also describe them as of humble origin in contrast. Buddhist writers link them to the tribe of the Shakyas to which the Buddha also belonged.

The Brahmi Script as a Source

With the accession of Chandragupta Maurya to the throne of Magadha in 321 B.C. began the Mauryan dynasty. In 1837, James Prinsep deciphered the earliest known Indian script, Brahmi, and from there came to know the name of the king as Devanampiya Piyadassi or beloved of the gods.

The Ashokan inscriptions have been found from areas of the Indian subcontinent including the peninsula. They were engraved on stone and placed at important places, either along trade routes or in the vicinity of towns. These inscriptions are written in Prakrit; one of them was bilingual wherein both Greek and Aramaic languages have been used. The script used is Aramaic and Greek in Afghanistan, Kharoshti in north-west Pakistan and Brahmi in other parts of the Indian subcontinent. These inscriptions are incised either on pillars of stone or on rock and consist of the 14 major rock edicts, several minor rock edicts and seven pillar edicts. A majority of these are proclamations made by the king to the public at large. It is for this reason that they were written in Prakrit, the language of the people, rather than in Sanskrit, the language of academics and intellectuals.

In addition to these are two other inscriptions in Ashokan Prakrit. These are inscribed in the Brahmi script of the third century B.C. One of them is the Sohgaura copper-plate inscription in Gorakhpur district and the other, the Mahasthan inscription of Bogra district. Both of these describe relief measures adopted during a famine in the region.

There are several literary texts both in Sanskrit and Pali that date from this and can be profitably used for a historical reconstruction of information regarding the Mauryas. The Fatakas for example are dated between the third century B.C. and the first century A.D. They contain a reference to the Mauryas and describe the general conditions prevalent during the early historical period. Of more specific interest, however, is the Digha Nikaya, which details the Buddhist concept of kingship. Though the Sri Lankan Chronicles come somewhat later in time, they provide useful information on the spread of Buddhism to Sri Lanka and Ashoka’s contribution to this expansion. The Dipavansha was compiled between the third century B.C. and the fourth century A.D. and the Mahavansha was written in the fifth century A.D. One of the problems about these texts is that since they were compiled long after the historical events had taken place, they perhaps incorporate later-day ideas and beliefs. Similarly, the Divyavadana, which is a collection of legends built around Ashoka, is not available in India but has survived in Tibetan and Chinese Buddhist sources.

A secular source of considerable importance is the Arthashastra of Kautilya but scholars are divided on its date. The Puranas contain legends interspersed with religious teachings in the section on genealogy and lists of rulers of different dynasties, the Mauryas being one of them. Greek and Latin sources have preserved impressions and accounts of travellers who visited India at this time. Of these, the most valuable is the account of Megasthenes who visited the court of Chandragupta and stayed for some time in Pataliputra. Unfortunately, the orginal text is now lost and what we have are quotations preserved in the works of later authors.

Archaeological excavations are an invaluable source of information on the use of various materials. Excavations undertaken at several sites in the Ganga valley have unearthed Mauryan settlements. The best known of these is the settlement at Pataliputra surrounded by a wooden palisade.

Pottery of various types came to be used in the Mauryan period, the most highly developed being the northern black polished ware. This ware has been extensively found in the Ganga valley but does not occur in South India.

Coins are a frequent occurrence at Mauryan sites, both in excavations and as stray finds and hoards. The earliest coins were perhaps minted by the Mauryans and have been termed ‘punch-marked coins.’ These were made of silver, and, instead of legends, had several symbols punched on them. It appears from the Arthashatra that there was a well-organised mint and officers carefully supervised the inscriptions on the coins.