Features of the Gupta Polity and Administration 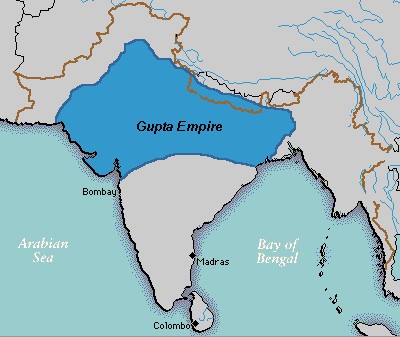 The Gupta administration constitutes the watershed between the past and future traditions of polity and government. It provided the model for the basic administrative structure, both in theory and practice for the entire early medieval period of Indian history.

The King as Godly or Superhuman

The Guptas discarded the modest title of ‘rajan’ and adopted the high sounding titles such as ‘maharajadhiraja’ which was used along with its several variants. In the records of North Bengal the Gupta emperors are given the trilogy of titles – ‘paramadaivata’, ‘paramabhattaraka’, ‘maharajadhiraja’, which became the distinctive designation of paramount rulers of later times. Besides, the Guptas added other epithets claiming for themselves superhuman qualities which raised them almost to the level of gods. In fact, in the Allahabad pillar Inscription Samudragupta is referred is to as a god dwelling on earth. All the smritis of this period consistently emphasise on one aspect of royalty – its super-human quality.

The fact that Gupta king adopted grandiloquent titles suggests the existence of lesser kings in their empire. The Guptas left a number of conquered states in a position of subordinate independence. There were frontier kings and republican people who were brought under various degrees of servitude but not directly incorporated within the empire by Samudragupta. With the exception of north Bengal, Bihar and U.P. the rest of the empire was held by such feudatories as the parivrajaka and uccakalpa princes who fulfilled their obligations to the emperor by offering homage, paying tributes and presenting their daughters in marriage to him. In later times the so-called parvrajaka maharajas habitually issued their land grants during their enjoyment of sovereignty of the Gupta emperors. The leading feudatories of the Guptas gradually gained strength with the decline of the empire and literally rose on its ruins to establish their independent kingdoms. The presence of these these feudatories considerably restricted the effective use of royal authority by the Guptas. A significant aspect of the Gupta bureaucracy is that because it was less elaborate and less organised compared to its Mauryan counterpart, it allowed several offices to be combined in the hands of the same person and posts became hereditary. A combination of all these factors naturally weakened direct royal control over the administrative machinery.

For the first time inscriptions give us an idea of systematic local administration in the Gupta period which assumed many new dimensions. In urban administration, organised professional bodies enjoyed considerable autonomy. They issued seals to enforce their authority which show that they managed the affairs of the towns. Although guilds are mentioned in the pre-Gupta texts, the most detailed laws regarding their functioning and business partnerships are laid down by the law-givers of the Gupta period. These corporate bodies had become so important that jurists enjoined the king to respect and implement the laws and the customs of the guilds. Corporate bodies played an important part in the administration of justice as well. The law codes provide a hierarchy of three such courts after which the final appeal lay to the king. It would therefore appear that in Gupta times guilds looked after the affairs of their members as well as of the towns in which they were situated. Consequently the state was partly relieved of the burden of administering the towns.

Another important feudal development in the Gupta period was the grant of fiscal and administrative immunities to priest and temples, a practice which started during the Satavahanas in the Deccan. The administrative privileges conferred on the beneficiaries was the distinguishing feature of the land charters of the Gupta period. The freedom they enjoyed in the Satavahana charters continued to this period. They were also allowed to exercise magisterial and police powers over the inhabitants of the donated village. In practice, the beneficiaries exclusively bore the burden of administration in the areas granted to them and exercised a stabilising influence over the rural communities.

Most of the nomenclature of the Gupta administration continued and some of it was borrowed from the earlier machinery of bureaucratic administration. The head of the civil administration was the mantri. Among other high imperial officers were included the mahabaladhikrta (commander-in-chief) the mahadandanayaka (general) and the mahapratihara (chief of the palace guards). The mahabaladhikrta, probably corresponding to the mahasenapati of the Satavahana kings, controlled a staff or subordinate officers such as the mahshvapati (chief of cavalry), mahapilupati (officer in charge of elephants), senapati and baladhikrta. Similarly, the office of the mahadandanayaka may be traced back to the Kushana times. A high ranking officer, heard of for the first time in the Gupta records, was the sandhivigrahika (the foreign minister).

Kumaramatyas and ayuktas acted as a link between the central and the provincial administration under the Guptas. The amatyas stand for the general body of officials in the Arthashastra and the jatakas, while the ayuktas may be traced back to the yutas of the Ashokan inscriptions and the yuktas of the Arthashastra. A new rank of kumaramatyas, to which belonged the high officers and the personal staff of the emperor, were created out of the class of amatyas by the Guptas. Similarly the ayuktas were entrusted with the task of restoring the wealth of kings won by the emperor and sometimes placed in charge of districts or metropolitan towns. The province was often divided into districts known as vishayas which were ruled by kumaramatyas, ayuktas or vishayapatis. Some records point to the association of a popular representative with the district as well as town and village administration.

In spite of decrease in the volume of foreign trade the Gupta age was a period of economic expansion promoted by grants of land to enterprising Brahmins in the virgin tracts in central India and the Deccan. The period also witnessed a marked growth of private property in land. This was recognised by the law books and attested by the actual sale and purchase of land. The prosperity of the ruling class is indicted by the abundance of gold coins. The Chinese pilgrim Fa Hien testified to the exceptional prosperity of the kingdom. The use of gold currency strengthened traders and rich artisans whose guilds played an important role in Gupta economy and administration.

Crafts production in this period covered a very wide range of items. There were items of ordinary domestic use like earthen pots, items of furniture and metal tools for domestic use. A wide variety of luxury items including jewellery made of gold, silver and precious stones, objects made of ivory, fine clothes of cotton and silk and other costly items were also extensively used. Some of these items were made available through trade; others were manufactured locally.

In the first centuries A.D., a new Sanskrit literary style emerged that remained influential for a long time both in itself and also through the modern Indian languages and their literatures. The karya style is characterised by an effort to compose poetry pleasing to both the ear and the mind. The style found its classical expression in the mahakavya and Sanskrit theatre. It was also extended to narrative literature, especially the prose novel. The great masters in the kavya form were Asvaghosha, Kalidasa, Magha, Bhavabhkati, and Bharavi. The earliest surviving kazya literature was written by a Buddhist, Asvaghosha, said to have been a contemporary Kushn king Kanishka. Asvaghosha’s work also marks a shift away from the Pli of the Theravda branch of Buddhism, back to the more and more accepted Sanskrit of the Mahayana branch. Two works are extant, both in the style of mahakazya: the Buddhacarita (“Life of the Buddha”) and the Saundari and nanda (“Of Sundari and Nanda”). Compared with later examples, they are fairly simple in style but reveal typical propensities of writers in this genre: a great predilection for descriptions of nature scenes, for grand spectacles, amorous episodes, and aphoristic observations. The resources of the Sanskrit language are fully exploited; stylistic embellishments (Alankara) of simile and metaphor, alliteration, assonance, and the like are employed. Though intended to instruct the reader to turn away from the sensuous life and follow the Buddha’s path, the work is at its best in descriptions of that very life. This is even more apparent in the Saundari and nanda, which recounts a well-known story of how the Buddha converted his half-brother Nanda, who was deeply in love with his wife, Sundari, and with the good life, to the monastic life of austerity. In his mastery of the intricacies of prosody and the subtleties of grammar and vocabulary, Asvaghosha shows himself the complete forerunner of the later mahakazya authors.