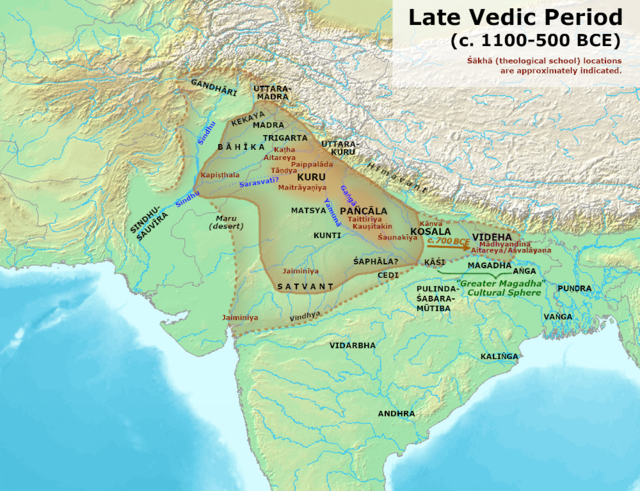 In the later Vedic period the main centre of the Aryan civilisation shifted from Saplasamdhav to the Ganga-Yamuna doab. New Aryan tribes, the Kuru, Panchala and Anga emerged. The battle of Kurukshetra took place in 956 B.C.

Small tribal states of the Rig Vedic age, the Fanas, got transformed into big territorial states called the Fanapadas. The office of the king became autocratic and divine. The powerful legislative assembly disappeared. Sabha became a barely functional body.

The king performed complicated ceremonies like rajasuya, ashvamedha, vajapeya and claimed divine status, and the bureaucracy got well established. Akshavapas supervised the gambling houses. Givikartan was the royal bodyguard. Suta was the royal bard and chariot driver. The sutras recited verses from the Mahabharata and were called jayasamhita. The other names were satasahasra samhita and pancham Veda.

The tax system became well established. Bhaga was the compulsory tax collected by the Bhagduga. Bali was the voluntary offering collected by the bali sadaka. Regular armies were formed for the first time.

Society in the Later Vedic Period

Varna ashrama dharma viz Brahmacharya, grihastha, vanaprastha and sanyas was introduced for the first time. All the four stages were compulsory for Brahmins, the first three for kshatriyas, first two for vaishyas while shudras were exempted. Sanyas implied the development of vairagya, or a state of dispassion and detachment from material life, renouncing worldly thoughts and desires in order to spend the remainder of one’s life in spiritual contemplation. These dharmas were first mentioned in Javala Upanishad.

Chandalas were born out of pratiloma marriages (between lower caste man and upper caste woman). Untouchables by profession were antyaja (who stayed outside village). Nishaad and Kirat were uncivilised forest tribes.

The custom of niyoga, cohabitation of wife with husband’s brother, started during this time.

The most important development was the introduction of iron technology called the krishna ayas. It democratised the production process. As a result, the agrarian economy expanded, generating surplus production. Trade and commerce developed and cities were formed.

The pottery manufactured during this period was painted grey ware. In the Vedic literature it was called the neelalohitha.

New gods, Pushan and Kuber appeared. Pushan was considered the god of the shudras. He took care of the cattle population and marriages. Kuber was the god of wealth and prosperity. He was also called Narahvahandutta, god with man as vehicle.

Towards the end of the period the kshatriyas, vaisyas and shudras revolted against the increasing monopoly of brahmins. Social unrest was responsible for the emergence of Buddhism and Jainism.