Administration in the Maurya Empire 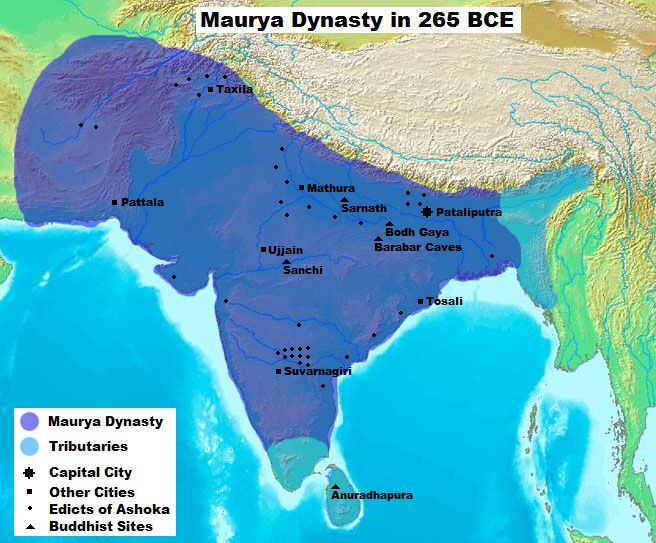 A study of the Arthashastra in conjunction with the edicts, provides information regarding the administrative structure. At the centre of the structure was the king who had the power to enact laws. According to classical thought the chief function of the king was to maintain social order. There was a council of ministers or mantri-parishad to advise the king when required. This may have acted as a political check. But the powers of the council were limited owing to the fact that it was the king who appointed the ministers in the first instance. Three qualities of a minister that the Arthashastra stresses on are of birth, integrity and intelligence. It is likely that the ministers may have belonged to the two higher castes.

Two of the key offices in the central administration were those of the treasurer and chief collector. The treasurer was responsible for the storage of the royal treasure and of the state income both in cash and kind. The chief collector, on the other hand, was responsible for the collection of revenue from various parts of the kingdom. The Arthashastra provides a detailed list of the sources of revenue. These include revenue from cities, land mines, forests, roads, tolls, fines, licences, manufactured products, merchandise of various kinds and precious stones.

Expenditure from the treasury was on two major counts salaries of officials and public works. Here again we do have some idea of the relative salaries as the Arthashastra includes a break-up of the wages paid to officials. Expenditure on public works would have been largely in the construction and maintenance of roads, wells and rest-houses as well as major irrigation works such as the dam on the Sudarshana Lake. The other major expenditure was on maintaining a large standing army.

Apart from the metropolitan areas which were directly governed, the empire was divided into four provinces, each under a prince or a member of the royal family. The terms used for them in the inscription are Kumara and Aryaputra. Under Ashoka, there were four provinces.

The viceroy had the power to appoint some of his officials such as the mahamattas, who went on tour every five years. As several officials are referred to by the term mahamatta, their precise function remains unclear. A new type of mahamatta, frequently mentioned as the Dhamma-mahamatta was a position created by Ashoka in fourteenth year of his reign.

Provinces were subdivided into districts for purposes of administration and groups of officials were in charge of a district. One of these was the rajuka responsible for surveying and assessing land. In fact, the IV th  Pillar Edict of Ashoka is entirely addressed to the rajukas. They are advised on their behaviour towards the people and the rules guiding reward and punishment. A smaller unit of administration was the village and two important officials concerned with the administration of the village were the gopa and the sthanika. It seems that these officials were directly responsible for the collection of revenue and were recruited from the local populace.

The positions of the gopa and the sthanika do not appear in the list of salaried employees and it has been suggested that they were perhaps permitted to keep a part of the revenue collected in lieu of their salary. The evidence from the records of peripheral regions, especially the southern district, indicates that it was the clan chiefs who acted as intermediaries with the Mauryan state. After the decline of the Mauryas, these chiefs asserted their independent status and adopted the title of Mahabhojos and Maharathis.

An important tenet of the Arthashstra is that the king should be accessible to his subjects at all times. In addition, it laid down that the king should maintain an elaborate network of spies to inform him regarding the functioning of his officers. Ashoka’s edicts suggest that he did follow this advice, though his espionage system was not as complex as envisaged by Kautilya. In the Girnar Rock Edict, he states that his reporters are to have access to him no matter where he is, whether eating or relaxing or in the park. It would seem that the reporters would have been an important means through which the ruler learnt about public opinion.

Among the other officials mentioned in Ashokan inscriptions are those connected with the administration of the city and those who worked among the frontier peoples. The Arthashastra mentions the nagaraka or city superintendent who was responsible for the maintenance of law and order in the city. Megasthenes, on the other hand, describes a more elaborate system with the officials divided into various committees. Such a system may have worked for the capital city of Pataliputra but is unlikely to have been in existence in other parts. The fact that Ashoka had a separate set of officials for the administration of the frontier peoples indicates the importance that he attached to building up loyalty and mutual trust among the people inhabiting the border areas. Elsewhere in his edicts Ashoka states that he established centres of medical treatment for men and animals in neighbouring countries. In addition to these were the officials referred to as dhamma mahamattas. One of their functions was to record gifts and donations made to religious establishments. But we shall discuss this in greater detail in a subsequent section. The expansion of the empire under the early Maurya rulers meant that due importance was paid to the army. Both Kautilya and Magasthenes describe the administration of the army at great length. The state maintained a large standing army which, by all accounts, was well-paid and looked after.

Finally the distinction between the upper and lower levels of Mauryan administrative organisation should be stressed. In its upper levels it was centralised and uniform. The upper ranks were chosen directly by the king and paid high salaries. At the lower level, the picture was very different and control was far more decentralised. There was a substantial drop in salary of the lower levels and many of these would have been local appointees.