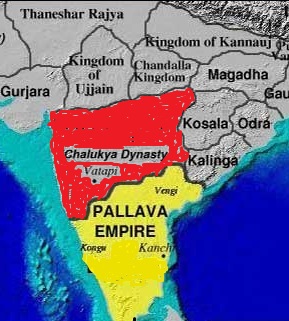 South India was home to three powerful kingdoms-the Pallavas, the Pandyas and the Cholas. There was a constant struggle for supremacy amongst these three kingdoms.

The Pallavas became powerful after the decline of the Satvahanas in the fifth-sixth century. Their capital was Kanchi. Two of the greatest Pallava rulers were Mahendravarman I and Narsimhavarman I.

The Pallava kings were patrons of art and architecture. The Ratha temple and the Shore temple at Mahabalipuram and the Kailashnath temple at Kanchi are examples of Pallava temple archirtecture. The Cholas defeated the Pallavas in the ninth century.

The kingdom of the Pandyas was to the south of that of the Cholas, in the region around modern Madurai. Their capital, Madurai, was an important centre of learning. Marco Polo visited the Pandya kingdom and has left an account of his visit. The kingdom declined in the fourteenth century.

Cholas were the most civilised race of the south. It is believed that this dynasty was founded by Karikala. The Chola empire was called Cholamandalam. It included Trichnopoly, Tanjore and some districts of Mysore and Madras (Now Chennai). Kaveripattam was its capital. The real founder of the Chola dynasty of Tanjore was Vijayalaya (846-871 A.D.), a feudatory of the Pallavas. His dynasty rose to its eminence and lasted for more than two centuries. He ruled over the region to the north of the River Kaveri. Parantaka I, a powerful Chola ruler, conquered Madurai from the Pandyas. He was, however, defeated by Rashtrakuta king, Krishna III at the Battle of Takollam in 949. The Cholas became weak after this defeat. It was Rajaraja Chola and Rajendra Chola who revived the empire and made the Cholas the greatest power in South India. Then Chola empire reached its zenith during the reigns of Rajaraja (985-1014) and his son, Rajendra I (1014-1041).

Rajaraja Chola, also called Rajaran I, was a brilliant General. He fought against the Pandyas and the Cheras, another ruling dynasty of south. He built a strong navy to monopolise trade along the coastal areas of Kerala, Sri Lanka and the Maldive Islands. Though a Shaivite, he was tolerant of other religions.

Rajendra Chola succeeded his father Rajaraja Chola. He continued his father’s policy of conquests. He defeated the Chalukyas of Kalyani and the Pala ruler of Bengal. He took the title of ‘Gangaikondachola’, or the ‘Chola conqueror of the Ganga’. He also built a new capital near the city of Tanjore and called it Gangaikondachola, or the ‘city of the Chola conqueror of the Ganga.

Rajendra Chola’s most daring campaign was in South-east Asia. For centuries, Indian merchants had been trading with various parts of South-east Asia and southern China. Indian ships had to pass through the Straits of Molucca, which was under the kingdom of Sri Vijaya. As the merchants of Sri Vijaya wanted to have monopoly over this trade, they began to find ways to keep the Indian merchants out of this trade. Many of these merchants were from the Chola Kingdom. They appealed to Rajendra Chola for help. He sent a huge navy and defeated the Sri Vijaya King. So trade with South-east Asia and Southern China continued, thereby greatly enriching the Chola kingdom.

The successors of Rajendra Chola continued to fight against the neighbouring kingdoms. These continuous conflicts weakened the Cholas. As a result, the empire declined towards the end of the thirteenth century.