Origin of Zero and the Decimal System 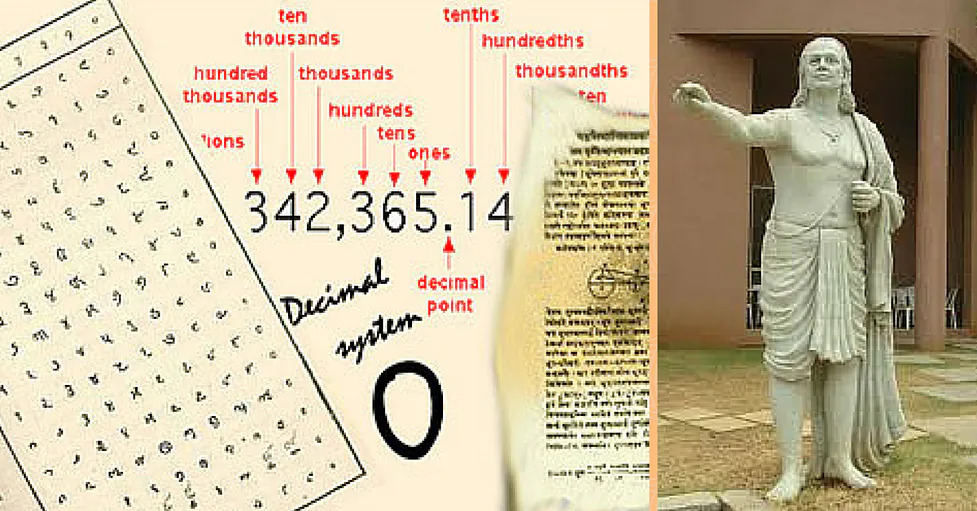 The zero was known to the ancient Indians and this knowledge spread from India to other cultures. Based on the idea of zero, the decimal system also originated in India. Arab Mathematicians – Al Khawarizmi and Al-Nasavi in 825 A.D. and 1025 A.D. respectively – refer to it as ta-rikh ai Hindi and al-amal al-Hindi.

Brahmagupta and Bhaskar, the second who reached the understanding of the number systems and solving equations, have together provided many rules for arithmetical operations with the zero. The symbols for nine numerals and a symbol for zero were well-established by the fifth century A.D.

Barend van Nooten has shown that binary numbers were known at the time of Pingala’s Chhandahshastra. Pingala, who lived around the early first century B.C., used binary numbers to classify Vedic meters. The knowledge of binary numbers indicates a deep understanding of arithmetic.

The acquisition of mathematical knowledge and competence in the subject covers three aspects that are in fact the mainstay for mastering any discipline. (a) Pratyaksha ,i.e. perception (b) Anumana ,i.e. inference (c) Agama or Sabda,i.e., traditional or textual knowledge. These three together are known as pramanas.

The science of geometry originated in India in connection with the construction of the altars meant for Vedic sacrifices. Sulvas are studies in early Hindu geometry. The Sulvas or the Sulva Sutras are the manuals for the construction of the altars for worship. A number of postulates must have been tacitly assumed by the geometers of the Sulva for the geometric operations.

The postulates of the Sulva are connected with the division of figures such as straight lines, rectangles, circles and triangles. The Sulvasutra geometers were aware, among other things, of what is now called the Pythagoras theorem, over two hundred years before Pythagoras (all the four major Sulvasutras contain explicit statement of the theorem), and addressed issues such as finding a circle with the same area as a square and vice versa, and worked out a very good approximation to the square root of 2, in the course of their studies.

The Jain tradition also played an important role in the mathematical development in the country. Unlike the Vedic people, the Jain scholars derived their motivation for mathematics not from ritual practices, but from contemplation of the cosmos. The Jains had an elaborate cosmography in which mathematics played an integral role, and even largely philosophical Jain works are seen to incorporate mathematical discussions. Notable among the topics in the early Jain works, from about the 5th century B.C. to 2nd century A.D. were geometry of the circle, arithmetic of numbers with large powers of 10, Permutations and combinations, and classifications of infinities (whose plurality had been recognised by the Jains). Jain texts also contain unique formulae for lengths of circular arcs in terms of the length of the corresponding chord and the height over the chord, and also for the area of regions subtended by circular arcs together with their chords.

The term ‘Vedic mathematics’ is associated with a book by that name, written Shri Bharati Krishna Tirthaji and published in 1965. e book describes short-cut procedures for certain kinds of arithmetical or algebraic computations, to which have been associated short phrases in Sanskrit, serving as an aid to the memory for the individual procedures; the book refers to 16 of these phrases as ‘sutras’, and another assortment of similar phrases as ‘sub-sutras’. It has been clearly shown that these phrases have no basis in the Vedic literature, and are extraneous to the Vedas with respect to language, style and mathematical content. The mathematics described in the book is essentially a twentieth century formulation, and it is just called Vedic mathematics.

The ancient interest in astronomy was an extension of religious preoccupations and, as a result, astronomy and mathematics ran parallel. Both were faithful to the needs of objectivity and subjectivity. Astronomy began as mere wonder at what was observed in the heavens above, grew into a systematic observation and speculation, hence forward into scientific inquiry and interpretation, finally emerging as a sophisticated discipline.

Mystical interpretations of the movement of stars and planets developed into astrological science, and astronomy grew into a major factor in the intellectual pursuits of different cultural periods. The chief sources of astronomy-related information are the Vedic texts, Jain literature, and the siddhantas (texts), as also the endeavours in Kerala. Some seals of the Indus Valley period are believed to yield information of the knowledge available to those early settlers, as also the orientation of certain constructions clearly governed by such considerations.

An interesting aspect is the Jantar Mantar observatories built by Sawai Jai Singh of Jaipur. There are five such structures for measuring time and for astronomy-related calculations, at New Delhi, Varanasi, Jaipur, Mathura and Ujjain. These eighteenth century astrolabes are important for both scientific and architectural reasons. Sawai Jai Singh, in his determination to provide accurate astrological tables, ordered these gigantic structures of stone. The Jaipur observatory includes the largest sundial in the world with a 90 feet high projecting arm (the gnomon).

The measurements achieved by these Jantar Mantars were particularly impressive for their time — the astronomical table was very accurate and in some instances, better than contemporary western ones. This table was published in Persian and Sanskrit as the Zij Muhammad Shahi. Time was calculated by a study of the shadows cast by the central straight walls on to the curved walls beyond. The weather forecasts and other information provided by these sundials were used for both religious and practical purposes.

Astronomy in the Vedas

The four Vedas comprise the Samhitas — texts of prayers and hymns, charms, invocations and sacrificial formulae. The Rig Veda is the Book of Devotional Verse, the Yajur Veda is the Book of Sacrificial Formulae, the Sama Veda is the Book of Chants, and the Atharva Veda is the book of Mysticotherapeutic Priestcraft. Their composition precedes their arrangement into the four Samhitas by a long period of oral transmission. Rig Veda and Atharva Veda hymns point to the observance of a lunar year. The Moon itself was regarded as the ‘maker of months’ — masakrt. Many indications are present as to the awareness of the autumn equinox — references to Aditi (this corresponds to Pollux, longitude 113°). Daksha (Vega longitude 284°), Rudra (Betelgeuse, longitude 88°) and Rohini (Aedebaran, longitude 69°).

The changing longitudes mentioned are a consequence of the precession of the equinoxes. These details are useful for estimating the date of composition of the works. Yajur Veda and Atharva Veda reveal a definite calendrical awareness — many sacrifices, including the Gavam Ayana, are of different lengths of time based on the daily cycle of the Sun. For ritualistic reasons, the day was divided into 3, 4, 5 or 15 equal divisions, each with a different name. Apart from naming twenty seven stars beginning with Krttika, these Vedas mention five planets and name two of them — Juipter (Brihaspati) and Venus (Vena). The Taittriya Brahmana speaks highly of nakshatravidya (nakshatra = stars, vidya = knowledge) and states clearly the existence of scholars of this science.