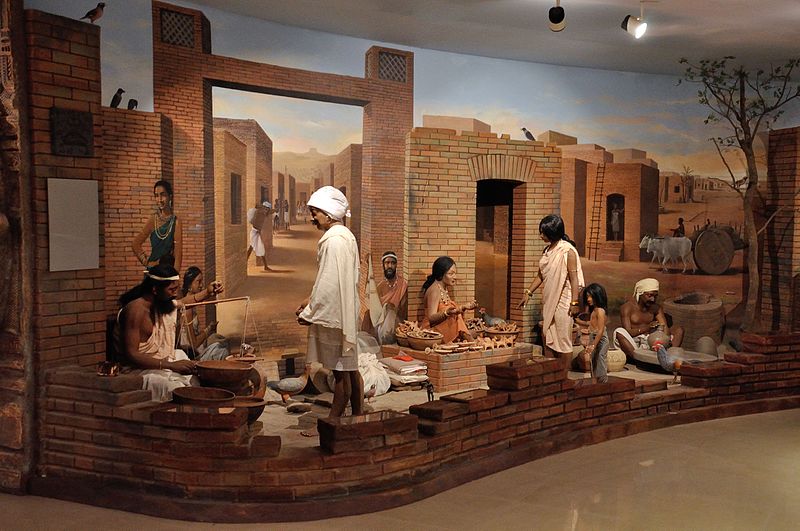 Extensive cultivation was practised. People had knowledge of all crops except sugarcane. They knew of irrigation systems and widely practised tank irrigation. The Indus valley civilisation used the model of irrigated agriculture which involved sufficient skill to reap the advantages of the spacious and fertile Indus River valley while controlling the intimidating annual flood that simultaneously fertilised but also caused extensive destruction. Having obtained a secure foothold on the plain and solved its more immediate problems, the new civilisation, with a wellnourished and increasing population, expanded along the flanks of the great waterways. The civilisation subsisted primarily by farming, supplemented by considerable commercial activities.

Foodgrains were stored in huge granaries in both Harappa and Mohenjodaro and possibly Kalibangan. Cereals were used as taxes from peasants and were used as payment of wages and during the times of emergencies. The Harappan people were earliest to produce cotton and this was the reason Greeks called them Sindhon, derived from the word ‘Sindh’.

The Harappans carried on considerable trade in stone, metal, seals, etc, within the Indus region. The majority of exchange were based on barter economy. They practised navigation on the coast of the Arabian Sea. Ekka was used for transportation of goods. A trading colony was set up in Afghanistan which facilitated trade with Central Asia. There were commercial contacts with regions around the rivers Tigris and Euphrates, as the discovery of Harappan seals from Mesopotamia suggests. They carried on long distance trade in Lapis lazuli.

Gold was imported from southern India or Afghanistan, silver and copper from Afghanistan or north-western India. In particular, the Khetri mines from Rajasthan provided copper for the entire IVC. Lothal, Balakot and Sutkagendor were the important ports in external trade.