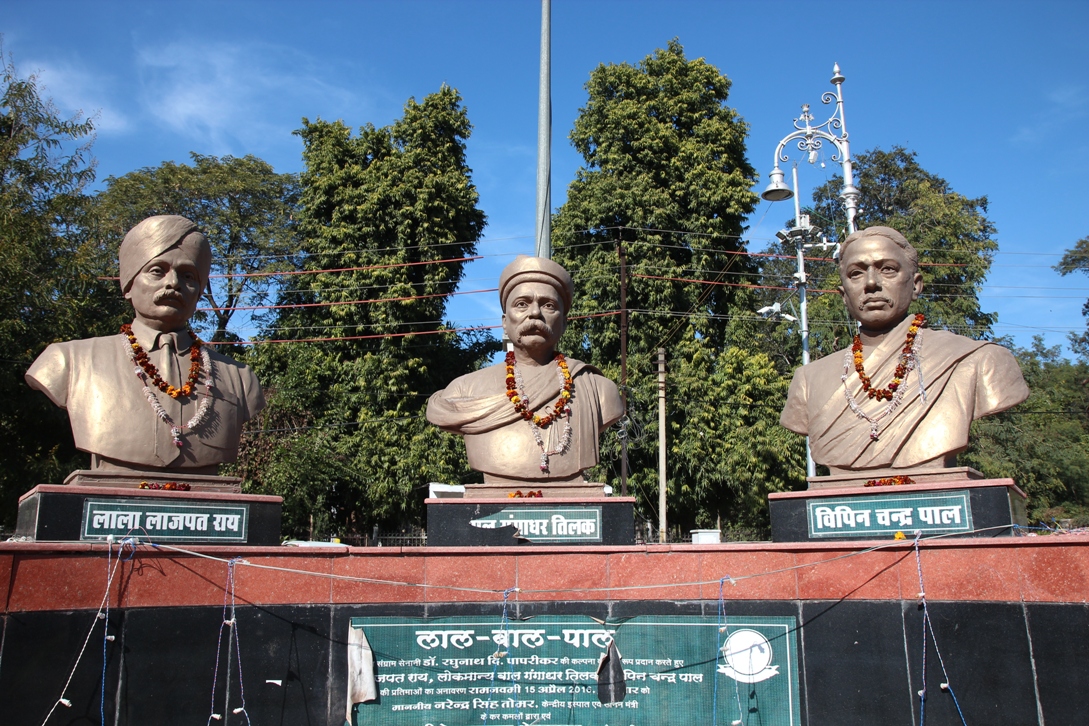 Bal Gangadhar Tilak (1856-1920) was an extremist/neo-nationalist, a journalist, social reformer and a Congressman. The British called him “Father of the Indian unrest” but was respectfully described by his countrymen as “Lokmanya”. He wrote The Arctic Home in the Vedas and Gita Rahasya. The Home Rule movement is associated with his name. He is even, today, remembered as the authoir of “Swaraj is my birthright and I shall have it.” M.A. Jnnah had advocated Tilak’s case. The Kesari and the Maratha were his papers. For him, nationalism was his religion. He had said: “I regard India as my Motherland and my Goddess, the people of India, my kith and kin, and the loyal and steadfast work for their political and social emancipation, my highest religion and duty”.

Lala Lajpat Rai (1865-1928) was a nationalist leader of repute. He was popularly known as Punjab Kesari. He was a great trade unionist. He belonged to Arya Samaj, had started the paper, Koung India, and as Congressman, had joined the neo-nationalists like B.G. Tilak and Bipin Chandra Pal. His tirade against the colonial Britain and the moderate Congress is well-known. He had travelled to the USA to campaign for propagating his nationalist ideas. He opposed the Simon Commission when it visited Lahore. Amidst protests, he was lathicharged and had died. Before his death, he had said: “Every blow made upon me will act like a nail in the coffin of the British empire.”

Sri Aurobindo (1871-1950) was a nationalist saint. A freedom fighter initially and later turned a yogi, a philosopher, a guru and a poet. He gave nationalism a spiritual outlook. Before he shifted to Pondicharry (Puducherry) ashram in 1910 , Sri Aurobindo, while joining hands with the extremist-nationalists, had condemned the British rule in India with as much zeal as he criticized the Congress’s moderate policies. His famous works included: The Ideal of Human Unity, The Life Divine, The Human Cycle, The Foundations of Indian Culture, and the like. His statement about the concept of ‘freedom’, in the background of the 1789 French revolution, harmonizing freedom with those of equality and brotherhood is really remarkable. He had written: “It (freedom) is the goal of humanity, and we are yet far off from that goal. But the time has come for an approximation being attempted. And the first necessity is the discipline of brotherhood, the organization of brotherhood; for without the spirit and habit of fraternity neither liberty nor equality can be maintained for more than a short season. The French were ignorant of this practical principle; they made liberty the basis, brotherhood the superstructure, founding the triangle upon its apex …… the triangle has to be reversed before it can stand permanently.”

The Swadeshi Movement found its roots in the anti-Partition agitation (1905). Finding demonstrations and public meetings as ineffective, the people of India and those of Bengal in particular resorted to hasher methods. Most of the meetings were held all over the province of Bengal where Swadeshi (use of Indian goods) and boycott of the foreign (British in particular) made goods were boycotted. In many places, foreign cloth were burnt and the shops selling the foreign cloth were picketed. In September 1906, Summit Sarkar quotes the collector of customs, 22% fall in the quantity of imported cotton piecrods, 44% in cotton twist and yarn, 11% in salt, 55% in cigarettes and 68% in boots. Describing the success of the Swadeshi movement, Surendranath Bannerjea writes: “Swadeshim during the days of the potency coloured the entire texture of our social and domestic life. Marriage presents that included foreign goods, the like of which could be manufactured at home, were returned. Priests would often decline to officiate at ceremonies where foreign articles were offered as ablations to the gods, Guests would refuse to participate in festivities where foreign salt or foreign sugar was used.” On the day of giving effect to the partition scheme (October 16, 1905, there was a hartal in Calcutta. People walked barefooted and bathed in the Ganga. Rabindranath Tagore composed the national song “Amar Sonar Bangla” sung by crowds parading the streets (later adopted by Bangladesh as a national song in 1971). Bande Mataram too became the national song. The students all over the province participated in the movement. Soon, the movement spread over in all the regions of the country, including Bombay, Madras and northern Indian. The Swadeshi movement had an impact on the people of India. The emphasis was on ‘self-reliance,’ ‘fostering the native goods and enterprises’, national education.