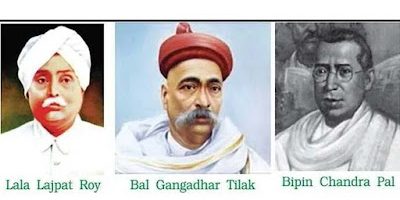 Sumit Sarker (Modern India : 1885-1947) refers to three forms of reaction against moderates’ agitation in which India found itself in years after 1905:

(a) a somewhat non-political trend towards self-development through constructive work, mostly by those who kept themselves in the moderates’ fold after the 1907- split;

(c) revolutionary nationalists who, spread over almost in all the regions of the country and even abroad, sought a short-cut to freedom through outbreaks and outbursts.

The rise of extremism in Indian politics, though, may be synchronized with the Curzon regime, starting with his notorious scheme of partitioning Bengal (1905) and the beginning of the Swadeshi movement from Bengal and thereafter encircling the whole country, yet one may not ignore numerous factors and forces which helped the growth of extremism in India. The emergence of the extremist nationalism was, therefore, neither sudden nor isolated. It was, on the other hand, the natural development in the process of evolution.

(a) Dissatisfaction with the methods and achievements of the moderates: The achievements of the Indian National Congress during the first two decades of its existence were not very impressive. It met every year, resolved, deliberated and thereafter did nothing for the rest of the year. The left wing in the organization grew impatient and began to challenge the authority of the older leaders. They believed that mere protests, deputations to London and the annual declarations of grievances would never yield and did not yield any positive results. Lala Lajpat Rai observed “After more than twenty years of more or less public agitation for concessions and redress of grievances they had received stones instead of bread”. This dissatisfaction with the methods and achievements of the moderates impressed upon younger elements that a radical change in the operation of the organization was essential.

(b) New socio-economic conditions : During the second half of the nineteenth century there was a steady increase in the number of schools and colleges run either by the Government or by the missionaries or by enlightened Indians. With the increase in the number of educational institutions, the strength of the educated Indians also multiplied. But there was no corresponding progress in the economic sphere. Hence, the educated class was faced with the problem of unemployment. The industry offered them no avenues; the over-burdened agriculture provided no scope; and, above all, the Government made every possible effort to exclude educated Indians from the civil service. This led to frustration and disappointment which considerably influenced the national movement. To quote A.R. Desai. “Political discontent born of the economic sufferings due to unemployment among the educated middle class was an important factor in the growth of the political currents of militant nationalism.”

(c) Terrible calamities and consequent distress: During the last quarter of the nineteeth century, about eighteen famines occurred in the country, but the famine of 1896 was the most intense and severe ever then known under the British rule. It reduced the people to unknown poverty and also caused a heavy mortality. The officials, no doubt, expressed sympathy for the dying Indians but did not take adequate measures to stop the ravages of the famine. They neither fed the hungry mouths nor saved the lives of the starving peasants. The Indians, in consequence, suffered great hardships and died like flies. To the havoc caused by the terrible famine was added the misery of the bubonic plague, a disease previously unknown to India. The

Government was anxious to root it out and took some measures to stop it from spreading but failed to alleviate the sufferings of people. The plague took a heavy toll of lives and many cities and provinces were devastated. The inhuman conduct of the British soldiers employed to help the plague-stricken people added to the difficulties of the sufferers. According to D.V. Tahmankar, the British soldiers, because of their rough methods were dreaded more than the epidemic itself. They made the Indians realize their helplessness. They shook their faith in the constitutional agitation.

(d) Indians’ humiliation abroad : The ill-treatment and humiliation of the Indians in South Africa also exercised a considerable influence on the national movement. The Indians were placed under a number of disabilities. They were not allowed to hold land registered in their names. They could not build houses in areas specified for the Europeans. Their children were debarred from receiving education in the first rate schools. No Indian was allowed admission in some of the hotels and hospitals. In Natal and Transvaal, they had to submit to the humiliating imposition of three-pound poll tax. Worse still, the Indians were classed as natives and subjected to discrimination on rail-road carriages, trains and cabs. They could not travel in the first class compartments. They could not walk even on footpaths.

They had to live among ‘dung heaps’ located outside the towns and they could not remain outside their houses after 9.00 P.M. By the Asiatic Registration Act of 1907, the Indians in Transvaal were required to be registered by finger prints like criminals. This was, indeed, very degrading. In England, too, the Indians were looked down upon as members of an inferior race. In short, our brethren living beyond the borders of the country were despised as slaves, were denied ordinary human rights and experienced nothing but humiliation and insult. This degradation of the Indian intensified anti-British feelings and thereby helped the growth of extreme nationalism.

(e) Influence of the revolutionary doctrines of the West : Extremism in India drew inspiration also from the revolutionary doctrines of the West. The struggles of independence waged in France, America, Italy and Germany disclosed to the Indians that those countries had not won freedom by constitutional agitation. They had rather used force, violence, and had launched rebellions and revolutions to achieve their ends. Even the British, their masters, had also forced their king to keep their liberty unimpaired. Consequently, the younger element in India began to feel that it would be mere foolishness on their part to expect justice or freedom from the British who had given no mean troubles to the Irish, their neighbours of the same blood but of different religion. They also realized that the Irish were not fools to shed their blood for something which they could achieve by resolutions and deputations. Consequently, the Indians lost their faith in the policy of mendicancy and resorted to force, violence and rebellion.