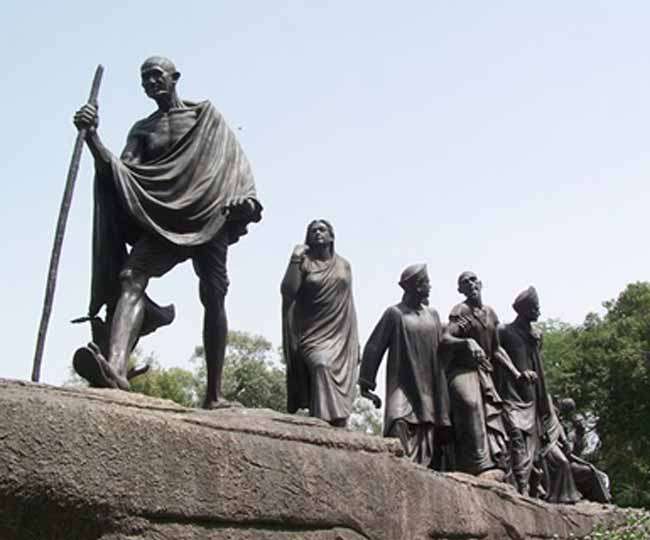 In accordance with the decision taken at the Lahore session of the Congress (1929), the unilateral Independence Day was celebrated throughout the country with pledge-taking ceremony on January 26,1930 . The Congress kept celebrating ‘independence’ day till India won freedom on August 15, 1947. Gandhi had stated that if the British Government did not grant the substance of independence through his already announced Eleven Points, he would launch the civil disobedience. Before he launched the movement, Gandhi wrote a letter to the Viceroy, but the reply that was sent back by the Viceroy was not only evasive, but was disappointing as well. Gandhi was left with no alternative but to launch the Civil Disobedience Movement.

On March 12, 1930, Gandhi, accompanied by his 78 followers, set out on his march from his Sabarmati Ashram for a small village, Dandi, on the seashore which was at a distance of 241 miles, so to violate the salt law. This march is known as the Dandi March and this movement, the Salt Satyagraha or the Civil Disobedience Movement. All along the route, he preached his movement and also the message of nonviolence. With him, marched the patriotic flavor. On the 24th  day, Gandhi reached the seashore. Early next morning, soon after the morning prayers, he and his followers broke the Salt Law by picking up salt from the seashore. It was a signal for the army of the non-violent soldiers to charge the citadel of British imperialism. The ‘General’ had made his first attack. Gandhi’s action was followed by a country-wide breaking of the Salt Law, and, for example, the breaking of the salt law by C. Rajagopalachari at the Tanjore sea-coast. At places where Salt Law could not be violated, other laws were violated. At Calcutta, the Sedition Law was broken by publicly burning the seditious literature. In the Central Provinces, forest laws were violated. As a part of the campaign, boycott of foreign goods and picketing of liquor shops also began on extensive scale. Besides, ladies joined in hundreds and suffered imprisonment. Thus, the Civil Disobedience Movement which started with the Dandi March soon developed into a very strong movement. According to Subhash Chandra Bose, “The Dandi March of Mahatma Gandhi was very significant. It may be compared to Napoleon’s march on Paris on his return from Elba and to Mussolini’s march on Rome with a view to the seizure of political power. Never was the wave of patriotism so powerful in the hearts of mankind as it was on this occasion which is bound to go down in the chapters of history of India’s national freedom as a great beginning of a great movement”.

The Government at first did not take the movement very seriously. They did not expect the Dandi March to be a serious development. The Anglo-Indian papers ridiculed the idea of Salt Satyagraha. The Statesman wrote that Gandhi ‘could go on boiling sea-water till Dominion Status was attained.’ Mr. Brailsford, an English journalist in India, described the Dandi March as the “Kindergarten stage of revolution”. He smiled at the notion that the King Emperor could be unseated by boiling sea-water in a kettle. But as the movement gained strength and popularity, the Government was placed in a trying position. People would not obey; they would not fight. Such obduracy was indeed maddening. In conventional rebellions, the rebels use weapons and come to an armed clash if they do not choose to obey. But Gandhi and his followers were unconventional rebels. They were fighting on a moral plane with weapons never used before by any rebel.

In such a situation of helplessness, the Government employed various forms of repression to put down the movement. The Congress was declared illegal and its offices were occupied by the police. All leading Congressmen including Gandhi and Jawaharlal Nehru were put behind the prison bars. Lathi charges, arrests and heavy fines became the order of the day. The oppression by the authorities in Gujarat was so great that 80,000 people had to take refuge in the nearby villages.

Despite repressive measures and uncommon atrocities, the movement continued with unabated fervour and nearly 1,00,000 people went in prison. The most spectacular demonstration of non-violence was seen at Peshwar where a number of Pathans held their peace and faced unflinchingly the bullets and bayonets of the military. So impressive was the forbearance and patience of the Pathans that on one occasion two platoons of British-led Hindu troops refused to fire on them when ordered to do so. With every lathi blow, with every skull broken down went the moral justification of the Empire and the British prestige in the eyes of the world.

Though the Nehru report was not accepted by the British Government, it did realize the urgency of fast-changing situations that some changes in the Indian administration could no longer be delayed. The Viceroy, Irwin, made the beginning by inviting the Indians to meet the British authorities at a roundtable conference at London. While welcoming the invitation, the Congress sought assurance that such a conference be held on the basis of dominion status. The Congress, in the absence of such an assurance, did not attend the first Round-Table Conference which began on November 12, 1930 in London, and continued till January 19, 1931.

The first Roundtable Conference of 1930-1931, was attended by 89 members- 16 from the British political parties, 16 from the Indian States and 57 from the British India. Nothing positive came out of the Conference : the debate on the nature of the responsible government to be instituted in India was unresolved; and issue of communal representation kept hanging. The Conference was adjourned in the hope that the Congress would abandon civil disobedience movement, and would hopefully attend the Second Round Table Conference. To create a conducive atmosphere, Gandhi and the other Congress leaders were released. In the meantime, certain liberal non-Congress leaders, after their return from England, met and impressed upon Gandhi to attend the Second Round Table Conference. A meeting between Gandhi and the Viceroy Irwin resulted in an agreement, called the GandhiIrwin Pact.

The Gandhi-Irwin Pact, also called the Delhi Pact (1931), had the following major provisions:

(a) The Government agreed to (i) withdraw its special ordinances (ii) release political prisoners but not those convicted of violent acts or the soliders who refused to fire in Peshawar; (iii) remit certain fines imposed on recalcitrant villages, (iv) allow certain villages to manufacture salt for their own use.

(b) Picketing was to be allowed but only within the limits permitted by the ordinary law, and discrimination against British goods was to cease.

(c) In return for these concessions, the Congress agreed to stop civil disobedience and participate in the next Round Table Conference.

Mahatma Gandhi, however, made most significant concessions on the basic constitutional issue : he agreed “that in the future scheme of Indian Government …….. Federation is an essential part; so also are Indian responsibilities and reservations or safeguards in the interests of India, for such matter as, for instance, defence; external affairs; the position of minorities; the financial credit of India; the discharge of obligation” (clause 2).

Though the Gandhi-Irwin Pact was hailed by the Government, it was not favourably welcomed by the Indians, particularly the Congress itself. Subhash Chandra Bose assailed Gandhi and Jawaharlal Nehru was shocked on clause 2, especially with regard to the concessions given on ‘reservations’ and safeguards.