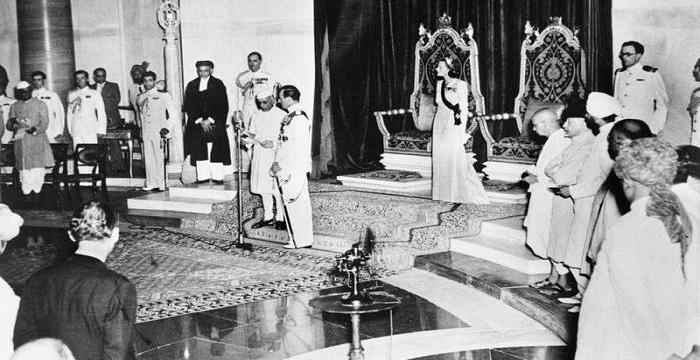 Describing the situation of the country in early 1946, Maulana Azad writes, “Anabolutely new India had been born. The people, whether officials or non-officials, were fired with a new desire for freedom. All the three branches of the Armed Forces-the Navy, the Army and the Air Force-were inspired by a new spirit of patriotism. They were in fact so full of enthusiasm that, at times, they could not conceal their feelings. Furthermore, the I.N.A. Trials in the Red Fort had awakened the sense of national prestige. The Labour party, accredited with its sympathy for the Indian cause, had won a sweeping victory in the British general elections and had succeeded Chruchills’s Government. In reply to Azad’s telegram of congratulations on their success, the Labour leaders, Mr. Attlee and Cripps had assured him of fulfilling the pledges that their party had given to India during the years it was in opposition. The Parliamentary Delegation which visited India in the winter of 1945-46 to collect first hand information about the political conditions in India had sensed the change of temper in the country. They were convinced that the Indian freedom could not be long delayed.

In accordance with the announcement of Mr. Attlee on February 14, 1946, a Cabinet Mission headed by Lord Pethick Lawrence (the Secretary of State for India) was sent to India in the next month. The other two members of the Mission were Stafford Cripps, the President of the Board of Trade and Mr. A.V. Alexander, the First Lord of Admiralty. The ‘three wise men’ arrived in Delhi on 24th  March and began a round of interviews with representatives of all political parties. Since negotiations with party leaders did not result in an agreed solution, the Cabinet Mission presented a scheme of its own which is known as Cabinet Mission Plan of 1946.

The Cabinet Mission proposals can be summarized as follows:

(a) Recommendations for a long-term settlement