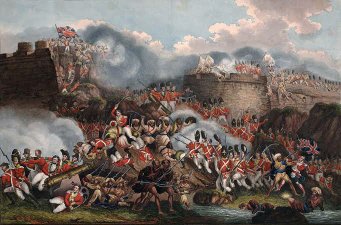 After Clive’s settlement in 1765, the East India Company had no desire for any further acquisitions. Its primary object was still trade; it regarded the acquisition of Bengal as a political framework for the safe conduct of trade, justified by the danger of near anarchy in its most profitable sphere of operations. But such a resolution was easier to make than to keep. Indian states frequently sought European help in achieving their own projects; many of the Company’s servants yearned for new sources of territorial revenues that might bring about their own enrichment, and the pressures of Indian politics at times made nonalignment difficult to observe.

In the year 1765 the three centres of the Company’s power were independent of each other, even as the post-Mughal power pattern in India was becoming clear. In the north there were the Mughal fragments of Allahabad, Awadh, and Delhi, with the Sikh kingdom emerging as a major power in Punjab. In the Deccan the Nizam of Hyderabad maintained his Mughal regime uneasily, pressurised by two vigorous and expansive powers-the Marathas and the Mysore kingdom. The Marathas had made their bid for the Mughal succession in the previous decade, and they were now recovering from a disastrous defeat at Panipat (1761). The unified leadership of the peshwa had now given way to a confederacy of the peshwa and four military dictatorships developing into monarchies. Their internal divisions weakened their position.

In the south the state of Mysore had passed into the hands of Hyder Ali in 1762. When Warren Hastings took overall control of the Company’s possessions in 1774, Madras had already entered into a conflict with Hyder Ali and had to submit to a virtually dictated peace with him in 1769 . The Nawab of Carnatic had become by degrees dependent on the Company because he needed its support against the threat of Hyder Ali and the nizam.

The major responsibility for Hastings in British India was preserving the Company’s dominion against a coalition of Indian powers, virtually without any assistance from home, because Britain was itself hard pressed both in America and by a European coalition. His first priority was to safeguard Bengal from the reviving power of the Marathas, who had conducted Shah Alam II to Delhi in 1771. Hastings intervened and handed Allahabad and Kora to Shuja al-Daulah of Awadh in return for a subsidy and a treaty. The following year he assisted the Nawab of Awadh in crushing the Afghan Rohillas in the Ganges-Yamuna doab.

In western India, the British approach was brash and filled with blunders. A succession struggle in Pune for the peshwaship led the British to support Raghunatha Rao in the hope of securing the island of Salsette and town of Bassein. When this was countermanded by Hastings in Calcutta, the Directors in London intervened to renew the venture. In 1779 a British army was surrounded on its way to Pune precipitating the Convention of Wadgaon, the terms of which were later repudiated by British officials. In 1782 however the British made peace with the peshwa, abandoning Raghunath and having only acquired Salsette after seven years of war. This first round of what came to be called the Maratha Wars was in this sense a stalemate.