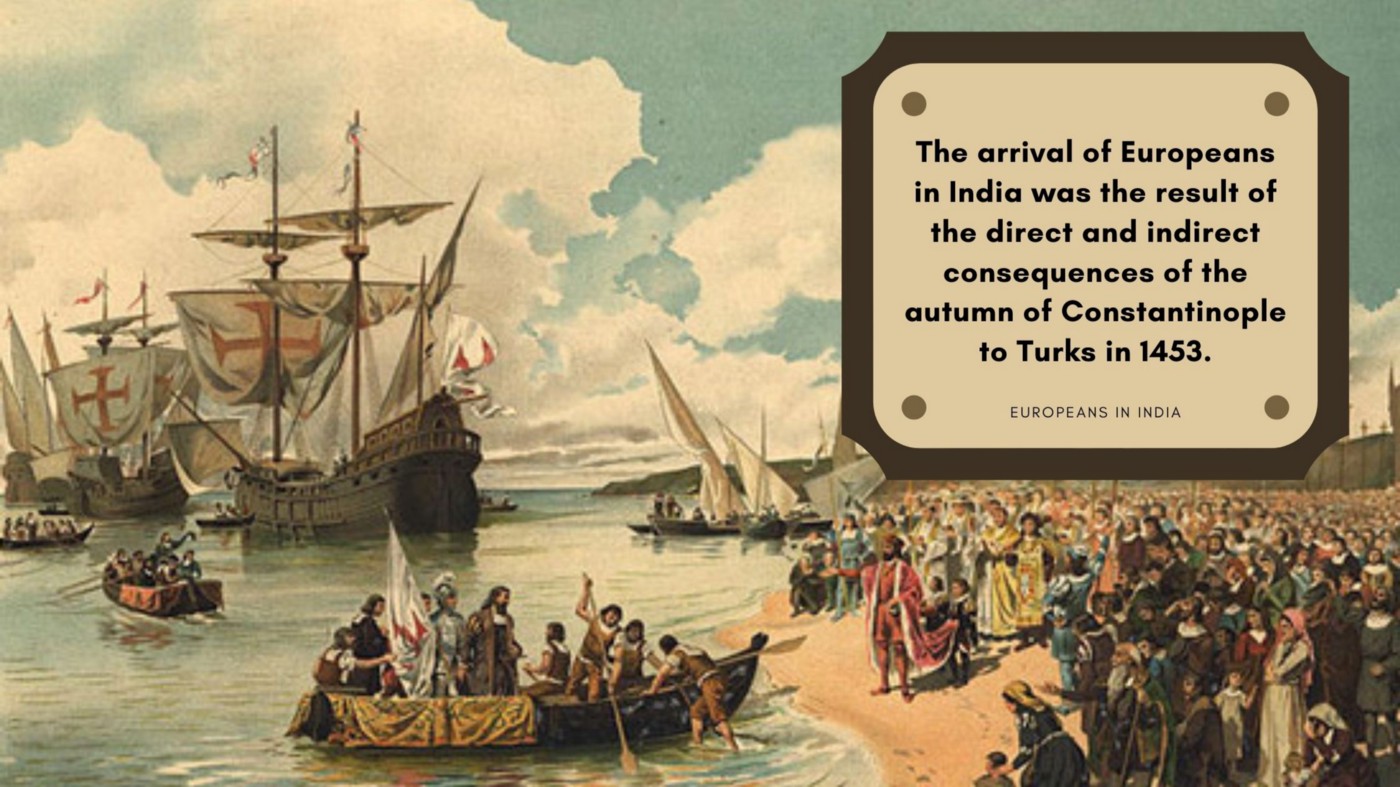 The Portuguese were the first agents of this renewed contact, because they were the ones who possessed both the navigational know-how and the necessary motivation for the long sea voyage. During the 15th century the direct routes for the Indian trade-via the Red Sea and Egypt or across Persia, Iraq, Syria, and Anatolia-had become increasingly blocked, mainly by the Ottoman Empire. After the fall of Constantinople to the Turks in the year 1453 the land route to India was permanently closed for the Europeans.

The motive for finding a new route was therefore strong, especially among the Portuguese and the Spanish, who had inherited a crusading zeal from wars against the Moors in Iberia and North Africa. Both countries sought an indirect route to the East, but Spain became focused on exploiting the wealth of the New World (coincidentally discovered while searching for a new route to Asia) while the Portuguese-equipped with the navigational techniques learned from the Genoese-sought a route to the East around southern Africa and the Cape of Good Hope.

When the Portuguese finally reached India, they were pleased to have found the presence of Christianity in the Syrian Christian communities of Cochin and Travancore, apart from the spices, a major part of the lucrative trade.

Consolidation of the Portuguese

Position Vasco da Gama’s successors, Francisco de Almeida and Afonso de Albuquerque, established the Portuguese empire in the East. Almeida set up a number of fortified posts, but it was Albuquerque (Governor from 1509 to 1515) who gave the Portuguese domain in India its characteristic form.

Albuquerque occupied Goa in the year 1510, Malacca in the East Indies in 1511, and Hormuz (Ormuz) in the Persian Gulf in 1515, and also set up trading posts in the East Indian Spice Islands (Indonesia). The primary goal was to establish for Portugal a strategic command of the Indian Ocean, so as to control the maritime spice trade and thereby cripple the economy of the Ottoman-controlled Arab Middle East. While Malacca was the nerve centre for the spice-producing islands of Indonesia, and the exchange mart for the trade with the Far East (East Asia), Goa, not Malacca, was made the capital because of Portuguese concern with the Ottoman threat.

The main elements of Portuguese approach were

But the Portuguese position was weakened because, with a population less than a million and with its involvement in Africa and South America as well, it was desperately short of manpower.

In an effort to alleviate this Albuquerque turned his fortresses into settlements to provide a resident population for defence and even encouraged intermarriage.

Portuguese Role in the Spread of Christianity

Portuguese Christianity was promoted through the Catholic church. Merchant fleets brought with them priests who were partly doing to serve the Portuguese as Chaplains, and partly for supposed missionary work. For them too, Goa was the headquarters and it became a diocese in the year 1534 for the whole of East from Cape of Good Hope to China.

Initially most of the Chaplains and missionaries were Franciscans. The Jesuits, led by St. Francis Xavier (1542), were later on to be followed by Dominicans (1548), Augustinians (1572), Carmelites (1614) and the Theatines (1640). Subsequently Goa became an archbishopric. St. Francis Xavier started from Goa on his mission to promote Christianity among the south Indian fishermen. The Inquisition was established in the year 1560 . The new mixed population thus became firmly Roman Catholic and provided a stubborn resistance to attacks. (Even today about 27% of Goa’s population is Catholic.)

However a lack of resources meant that the Portuguese did not attempt to establish a land empire. Portugal’s control of the Indian Ocean lasted through the 16 th century. During this time it attained great prosperity. Goa acquired the title of ‘Golden’, and it became one of the world’s great cities. Trade with Europe was a royal monopoly, and, in addition, a system of licences for all inter-Asian trade enriched the royal exchequer. Inter-Asian trade was free for Portuguese individuals ; and it was the profits of this trade, as well as the benefits from the royal monopoly, that made them prosperous.

The three characteristics of the Portuguese empire were trade, anti-Islamism, and religion. The Portuguese considered that no faith which was non-Christian was acceptable, and to this policy they added a tendency of cruelty beyond the limits of acceptability even in that period. As a result there was little local sympathy or support for them. In the religious sphere the Portuguese were distinguished by missionary fervour and intolerance.

The Portuguese thus had few friends in the East to help them in a crisis, and in the year 1580 the Portuguese kingdom was annexed to Spain; thenceforth until 1640, Portuguese interests in the East were sacrificed to those of Spain. Because of the Spanish failure to quell a Dutch rising in the Netherlands, and after the English defeated the Spanish Armada in 1588, the route to the East was opened to both English and Dutch.

Impact of Portuguese Rule in India

The Dutch in the East

In the race to possess the riches of the East, after the removal of the Spanish influence, the Dutch, having abundant resources, were the first to arrive after the Portuguese.

Their first voyage was in the year 1595 , helped by the local knowledge of Jan Huyghen van Linschoten, who had worked in Goa. Jacob van Neck’s voyage to the East Indies (Indonesia) in 1598-1600 was so profitable that the Dutch were induced to launch a great Eastern adventure. The Dutch objective was trade, focused on spices. Their interest in establishing an empire came later, in the 18th century, as a safeguard for their trading monopoly.

The Dutch therefore went directly to the East Indies, the main source of spices, and only secondarily to southern India for pepper and cardamom and to Ceylon for these and cinnamon. From the year 1619 their headquarters were fixed at Batavia (now Jakarta) in Java, from where they developed a series of outlying stations in the East Indian islands and intermediate ones such as Cape Town in South Africa, along with Ceylon for supply. This was the work of the Governor-General Jan Pieterzoon Coen (1618-1623 and 1627-1629).

The Dutch system demanded the control of the eastern seas, and this meant the elimination of European rivals, beginning with the Portuguese. The Dutch succeeded because of their superior resources and better seamanship, but the Portuguese, though defeated, were not destroyed. Ousted from most strongholds, the Portuguese retained their capital, Goa, in spite of blockades and sieges, and in fact, they did not surrender the area to even the free Republic of India until the year 1961.

The Dutch trade was operated through the Dutch East India Company. Much larger than the English East India company, it had the character of a national concern. Dutch sea power, more efficient than that of the Portuguese, secured monopoly conditions in the islands and sea-lanes. It was only in land areas such as Travancore that they had to face competition. However the key problem of trade for the Dutch, like for the English, was that they were short of exchange goods. They needed textiles to buy spices in Indonesia, and silver was needed to buy textiles (cotton or silk) in India and China. To establish the spice monopoly, the Dutch developed an elaborate system of Eastern trade from the Persian Gulf to Japan, the ultimate object of which was to secure the goods with which to secure the spices without needing to use scarce European resources. It was this trade that brought the Dutch to India at Surat, on the Coromandel Coast at Nagapatnam, in Bengal, and even up to Agra.