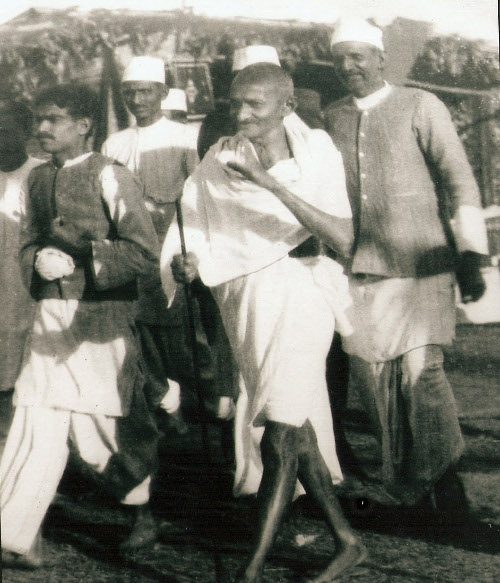 Let me state my faith. As a Congressman wishing to keep the Congress intact, I advise suspension of noncooperation, for I see that the nation is not ready for it. But as an individual, I cannot, will not do so, as long as the Government remains what it is. It is not merely a policy with me, it is an article of faith. Non-cooperation and Civil Disobedience are but different branches of the same tree called Satyagraha… Satyagraha is search for Truth, and God is Truth. Ahimsa or Non-violence is the light that reveals that Truth to me. Swaraj for me is part of the Truth. This Satyagraha did not fail me in South Africa, Kheda or Champaran and in a host of other cases I could mention. It excludes all violence or hate. Therefore, I cannot and will not hate Englishmen. Nor will I bear their yoke…

Some Thoughts on Swaraj: Gandhian Philosophy

Gandhi was not a Mahatma, but was the greatest of all human beings, the best of what a human being can ever be. He was not a saint but showed, by examples himself, how one can lead a saintly life. He was great among the greatest, the noble among the noblest and a fearless among the braves.

The essence of the non-cooperation movement consisted of-

(a) boycott of the impending elections under the Government of India Act, 1919;

(b) boycott of Government schools and colleges;

(c) boycott of the law courts and

(d) boycott of the foreign goods.

Besides, the non-co-operation resolution also advised

(i) surrender of titles, and honorary offices and resignation from nominated seats in local bodies :

(ii) refusal to attend Government Levees. Durbars and other official and semi-official functions held by the Government officials, or in their honour :

(iii) refusal on the part of the military, clerical and laboring classes to offer themselves as recruits for service in Mesopotamia.

The constructive side of the programme embodied

(1) the establishment of national schools and colleges for the education of the children;

(2) the use of private arbitration courts in place of Government courts for litigation etc;

(3) the adoption of Swadeshi in piece-goods on a vast scale;

(4) the revival of hand-spinning and hand-weaving;

(5) the removal of untouchability.

The progress of the non-cooperation movement was remarkable. It began itself the moment it was launched. The whole nation rose as one man : students came out of the educational institutions, the lawyers like C.R. Das and Motilal Nehru gave up their practice, abjured their accustomed luxury and plunged into the movement. Many Muslim leaders like Ali brothers, Dr. Ansari and Abul Kalam Azad also came forward as non-cooperators. Seth Jamna Lal Bajaj promised to pay an annual sum of ` 1,00,000 for the maintenance of non-practicing lawyers. The takla and charkha appeared in every home. They became the symbols of the movement, both in its political as well as its economic aspect. The Charkha appeared on the national flag and dominated the political history of India.

In this explosive situation, the British Government arranged the visit of the Prince of Wales to India. Misreading the Indian mind, the authorities believed that the Prince’s presence would excite the imagination of the masses with their traditional reverence for royalty. Here they erred grievously. The Congress, while emphasising that it meant no disrespect to the British Crown, proclaimed a boycott of all functions connected with Prince’s visit on the ground that the authorities were exploiting his presence for political purposes. Consequently, a complete suspension of public life, including the closing of business houses and schools preceded the Prince wherever he went. Empty streets greeted him and the functions held in his honour were boycotted. The Government now struck and struck hard. All Congress and Khilafat organizations were outlawed and a policy of mass arrests was adopted. In the next five months, about 30,000 nationalists were sent to prisons with their leaders viz., Mahatma Gandhi, the Ali brothers, Lala Lajpat Rai, Motilal Nehru, Hussain Ahmad, Abul Kalam Azad and others.

The suspension of the non-cooperation was a deplorable event. In mid-February, 1922, there was an unexpected development when Gandhi suddenly decided to suspend his non-cooperation movement. The reason which prompted this action was an outbreak of mass violence at the village Chauri Chaura in the Gorakhpur district of the United Provinces. It so happened that a crowd of Congress volunteers backed by a thousand peasants, came into clash with the authorities. The police fired on them and they retaliated by burning down a police station and some policemen. When Gandhi came to know of this holocaust, he was appalled by the violation of his creed. He announced that the Indian people were not yet ready to wage a non-violent struggle and, summarily called off the campaign.

Though non-cooperation movement suddenly collapsed, yet it had some very far reaching effects. It initiated the people to a new faith and new hope, and inspired them with a new confidence in their power to fight for freedom. It also revealed that the Congress movement had, for the first time, become a really mass movement in the sense that the national awakening had not only penetrated to the people at large, but also made them active participants in the struggle for freedom. It was no longer a deliberative assembly but an organized fighting party, pledged to revolution. Another important result of this movement was that it made our countrymen bold and patriotic. They lost the fear of the prison as well as of the power of the Government. Rebellion entered into their spirits and they were ready to defy the Government on any national emergency. Activities like hand-spinning, hand-weaving etc, which formed the part of the constructive programme of the movement, became popular.