The World War I and Revolutionary Activities Abroad 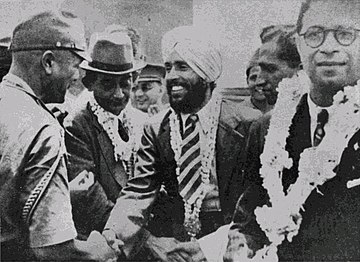 The First World War had a profound effect on the national movement in India. It gave a new meaning and urgency to the Congress demand for Swaraj. The Indians, at large, had grown accustomed to the foreign rule. Even political leaders like Pherozeshah Mehta, Madan Mohan Malviya, Surendranath Bannerjea and Mudholkar were more conscious of the benefits of the British Rule than its harmful effects. But the war brought home to them the humiliation of foreign conquest. It also made them realize the real meaning and value of Swaraj. The readiness of the British to sacrifice all for saving their country from the impending German domination could not but make the Indians feel the degradation to which they had been subjected.

Apart from that, the leading statesmen of England and America repeatedly declared in no uncertain terms that they were waging war to ‘make the world safe for democracy’. They also promised the right of self-determination to every nation, big or small. These solemn and liberal declarations did not fall flat on the Indian leaders. They certainly regarded them as something which they could exploit for securing their ends. Hence, whenever Tilak and his followers were invited to war conferences, they always raised the issue of Swaraj and linked it with the question of war aid. They also demanded that Indians be given equality of status with the British in the Army, Defence Forces and Reserved Forces. They must be allowed to hold commission and occupy higher services. They must receive a clear assurance that at the end of war they would return to a free country. All this, not unnaturally, strengthened the cause of India’s freedom and reinforced the national movement in the country.

The political awakening that war brought in its wake was also of a great value. It made the Indians more patriotic. It developed in them a new sense of self-esteem. It also made them optimistic about the future. In the words of Ishwari Prasad, “The success of the Indian soldiers on European battle fronts, the successful termination of war, the oft-repeated war time slogans of self-determination and equality, all gave birth to a new sense of national pride and new hopes of constitutional reforms”. Bal Gangadhar Tilak voiced the national feelings when he said : “We will remain in the Empire only as equals. We will not live in the Empire merely as servants and load carriers. India has now realized her strength and character….. The Indian people are now fully alive to their status and destiny. If the Japanese who are Asians like the Indians, can enjoy the liberties and responsibilities of Swaraj, why cannot we?”

The loyalty which Indians showed to the British in the war gave an additional strength to her demand of self-government. Her troops fought in France, Belgium, Egypt, the Sudan, East Africa, North China, Persia, Mesopotamia, Aden etc. etc. She bore the heavy expenditure of maintaining huge army. She also offered a huge free gift of one hundred million sterlings to Britain for conducting imperial war. Her supply in men, money and material was so large that the Vicerocy, Lord Hardinge, declared in the House of Commons, and repeated it in his autobiography, that India had been ‘bled white’ by the War Office. In return for these uncommon sufferings and services, the Indians demanded constitutional reforms for them. It was twice resolved in the Congress sessions that ‘in view of the profound and avowed loyalty that the people of India have manifested in the present crisis, the time has arrived to introduce further and substantial measures of reforms towards the attainment of Self-Government’.

The formations of the Berlin Committee and Ghadr Party had a great reaction in India. As soon as the Indian revolutionaries came to know that arrangements had been made by Germany for sending arms to India and a large number of revolutionaries were coming from the U.S.A. to join them, the plan for general rising took a definite shape. A new revolutionary spirit ran through the Punjab. Amir Chand and Rash Bihari along with Dinanath, Avadh Bihari, Balmukand and Basant Kumar Biswas, formed a revolutionary society linking it with Bengal revolutionary movment. A bomb was thrown at Lord Hardinge and revolutionary leaflets were distributed among the people. These revolutionary leaders also placed a bomb in Lawrence Garden at Lahore. Amir Chand, Avadh Bihari, Balmukand and Basant Kumar were hanged for these offences.

The revolutionary movement in Punjab was reinforced by the return of Sikh emigrants from Canada. They brought with them their tale of woes and of humiliating treatment that was being meted out to the Indians there. Quite a large number of them had been indoctrinated with the revolutionary philosophy of the Ghadr Pary. To make matter worse, two Japanese steamers Komagata Maru and Tosa Maru brought many Indians from America, and the Government’s precautionary measures to cheek their activeties led to riots. The returned emigrants organized dacoities, robberies, political murders and even made attempts to derail the trains. A factory for manufacturing bombs was established at Amritsar and simultaneous uprisings at Lahore, Ferozepore and Rawalpindi were planned. The Government met the situation with the Defence of India Act 1915 and the persons involved in the Lahore Conspiracy and other offenders were tried by special tribunal which passed heavy sentences of death, internment and deportation.