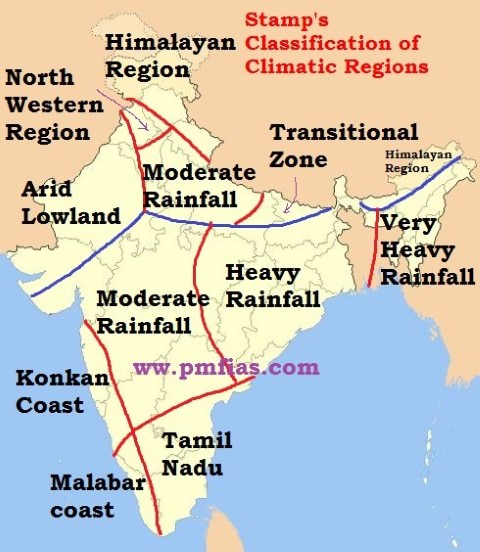 Although Indian climate is broadly termed as ‘Monsoon Type’, yet there are great variations from one part of the country to another. For example, the climate of Punjab and West Bengal are broadly monsoon type but there are differences in the temperature, rainfall, humidity, etc. in respect of these two areas. A climatic region generally possesses a broad uniformity in climatic conditions caused by the combined effect of climatic factors. The two most important factors of climatic classification are temperature and rainfall. Several attempts have been made to divide India into climatic regions, but the scheme developed by Koeppen is the most accepted and will be discussed here.

Koeppen’s regions are based on the monthly values of temperature and precipitation. He identified five major climatic types. He used letters A, B, C, D and E to denote these climatic types detailed as under:

He further sub-divided the above mentioned types into sub-types on the basis of seasonal variations in the distribution pattern of rainfall and temperature. Koeppen used small letters to define these sub-types. These letters are explained as under:

a = Hot summer, average temperature of the warmest month over 22°C

g = Ganges type of annual march of temperature; hottest month comes before the solstice and the summer rainy season

Nine climatic regions of India as suggested by Koeppen are detailed as under.

Monsoon Type with Short Dry Season (Amw)– This type of climate is found on the western coast of India, south of Goa.

Monsoon Type with Dry Season in Summer (As)– This type of climate is experienced along the Coromandel Coast of Tamil Nadu.

Tropical Savannah Type (Aw) – The tropical savannah type of climate prevails all over the peninsular plateau except the Coromandel Coast, the Malabar Coast and some of its adjoining areas. Its northern boundary almost coincides with the Tropic of Cancer.

Semi-arid Steppe Climate (BShw) – This climate is found in the rain-shadow area of southern peninsula and parts of Gujarat, Rajasthan and Haryana.

Hot Desert Type Climate (BWhw) – This is extremely dry climate and is found in the western part of Rajasthan.

Monsoon Type with Dry Winter (Cwg) – This climate is found in most parts of the great plain of north India.

Cold Humid Winter with Shorter Summers (Dfc) – This type of climate prevails in the north-eastern parts of India, particularly in Sikkim, and Arunachal Pradesh.

Tundra Type (Et)-  This is found in the mountain region of Uttarakhand. The temperature falls with ascent.

Polar Type (E) – The polar type of climate is generally found in Jammu and Kashmir and adjoining mountain ranges.