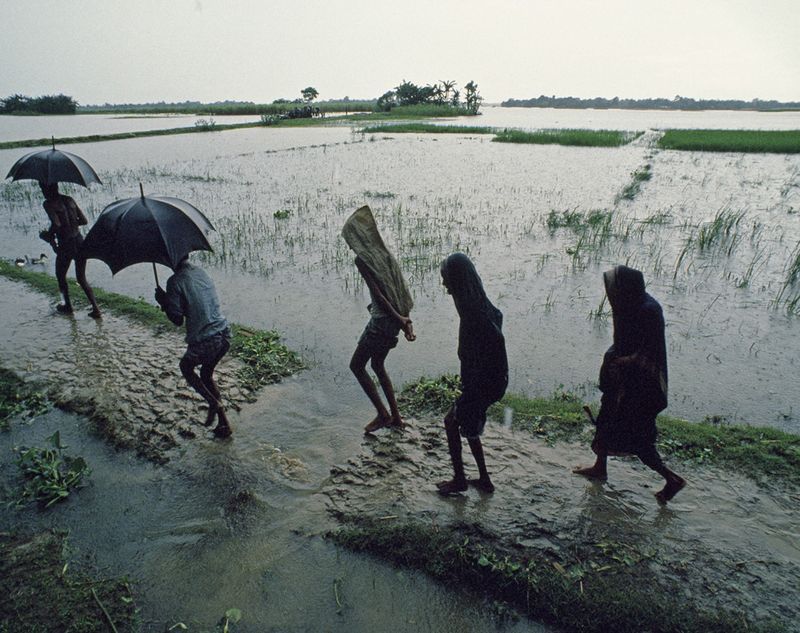 After the summer season comes the rainy season. It starts with the onset of the south-west monsoon. This season starts in June and ends in October. This is the rainy season in the true sense because monsoon winds are active all over the country. India receives about 80% of its rainfall from the south-west monsoon winds alone. The rains begin rather suddenly. This sudden onset of rain is often termed as ‘monsoon burst’. The monsoon may burst in the first week of June or even earlier in the coastal areas, while in the interior it may be delayed to first week of July. The temperature falls by 5°C to 8°C from mid-June to mid-July due to rains. The south-west monsoon is normally divided into following two currents:

This current of south-west monsoon originates in the Arabian Sea and hence its name. It divides itself into three sub-currents on reaching the western coast of India.

It enters the Narmada-Tapi trough and goes uninterrupted in the absence of any major obstruction near the coast. It brings about 60 cm rainfall to Nagpur.

After originating from the Bay of Bengal, it divides itself into two sub-currents:

It enters the Garo, Khasi and Jaintia Hills of Meghalaya after crossing the Ganga Delta. Here the moisture-laiden monsoon winds have to take a sudden rise in the funnel-shaped hills and cause very heavy rainfall. Cherrapunji in Meghalaya receives rainfall of 1102 cms which was recognised as the world’s highest rainfall till recent times. But the recent records have shown that Mawsynram, a small station located 16 kms to the west of Cherrapunji receives 1221 cms of annual rainfall and is supposed to be the rainiest place in the world.

The second current goes to the Himalayas and, after reaching there, it moves towards the west in direction parallel to the Himalayan ranges. The rainfall by this current is characterised by a declining trend with increasing distance from the sea. Kolkata receives 119 cm during the south-west monsoon period, Patna 105 cm, Allahabad 76 cm and Delhi 56 cm.

The eastern coast of India, particulary in Tamil Nadu, remains relatively dry during the south-west monsoon period. This is because the Tamil Nadu coast lies in the rainshadow area of the Arabian Sea current and is parallel to the Bay of Bengal current.

The Season of Retreating Monsoon

The south-west monsoon begins to retreat from the northern India by first week of September and continues to retreat from the southern India from mid-October to the beginning of December. Unlike the ‘sudden burst’ of the advancing monsoon, the retreat is rather gradual. With the retreat of the monsoons, the clouds disappear and the sky becomes clear. The day temperature rises slightly but the nights become pleasant with the mean minimum temperature going down to 20°C or even below that. The diurnal range of temperature also increases. The cyclonic storms which develop in the Bay of Bengal during this season cause substantial rainfall on the eastern coast.