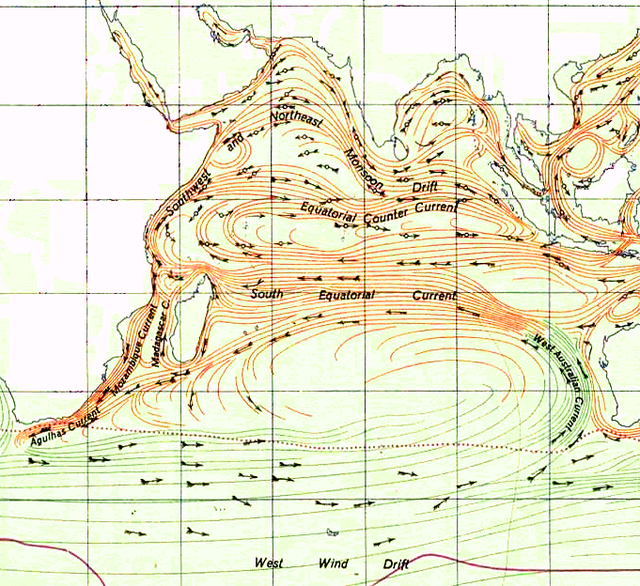 A brief discussion of the main characteristics and genesis of the monsoon will be useful to understand the monsoonal regime of the Indian climate. Following aspects of monsoonal rainfall will help in understanding the monsoon in a better way:

The Onset and Advance of the Monsoon

Many scholars still believe that the main mechanism of monsoons is differential heating of land and sea in the summer season. The land mass, particularly in the north-west India gets intensely heated during summer season causing a very low pressure area there. The Indian Ocean remains comparatively cooler leading to high pressure condition there. This causes a north-ward shifting the position of Inter Tropical Convergence Zone ITCZ and the south-east trade winds cross the equator and, after deflection, these winds enter India as south-west monsoon winds. The shifting the position of the ITCZ is also related to the withdrawal of the westerly jet stream from the south of the Himalayan range. The easterly jet stream is caused by the summer heating of the Himalayan and the Tibetan highlands.

These highlands occupy a vast area of 4.5 million square kilometres with an average altitude of more than 4,000 metres. As these highlands are heated in summer due to northward shift of the sun, a clockwise circulation of the wind takes place in the middle of the troposphere. This results in two main streams of air from this landmass. One of these streams goes towards the equator while the other is deflected towards the pole. The equator toward flow enters India as easterly jet stream while the poleward stream goes to East-Central Asia as westerly jet stream.

The south-west monsoon sets in over the Kerala coast by 1 Jun and reaches Mumbai and Kolkata by 10-13 June. It spreads all over the sub-continent by 15 July.

Rain-bearing System and Rainfall Distributine monsoon rainfall is never continuous but comes as wet spell followed by dry spells. The tropical depressions from the Bay of Bengal cause rainfall in the northern plain of India while the west coast of India receives rainfall from the Arabian Sea current of the monsoon. The intensity of rainfall on the west coast of India depends upon the offshore meteorological conditions and the position of the equatorial jet stream along the eastern coast of Africa.

The frequency and the tracks of Bay of Bengal depressions depend upon the position of ITCZ which is generally known as the monsoon trough. A change in the position of ITCZ causes a change in the axis of the tropical depression which brings about a change in the intensity and distribution of rainfall. The amount of rainfall decreases from west to east-north-east over the west coast and from east-south-east towards north-west over the Indian plain and the northern peninsula.

Break in the Monsoon

When the south-west monsoon fails to bring rainfall for two or more weeks and there is a dry spell in the rainy season, it is called the break in the monsoon. This break may be caused either by failure of the tropical depressions or by dislocation of the monsoon trough (ITCZ) over north India. Over the west coast, we experience dry spell when the winds blow parallel to the coast. In the western part of Rajasthan, the inversion of temperature prevents rain-bearing winds from rising up and a dry spell is experienced.

The Retreat of the Monsoon

The south-west monsoon starts retreating by 1st Sept ember from the western strip of Rajasthan and, by 15th September, it retreats from most parts of Punjab, Haryana, Rajasthan and Gujarat. It retreats from most parts of India by mid-October, except the southern peninsula. The retreating monsoon picks up moisture from the Bay of Bengal and establishes itself over Tamil Nadu coast in the month of December and causes rainfall there.