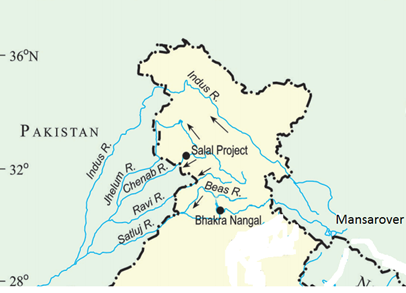 Drainage system is the network of channels through which the water flows. India is traversed by a large number of rivers, big and small. The area drained by a river is known as its basin, catchment area or water shed. Every river, big or small, has its basin or watershed, or catchment area. On the basis of origin, two broad drainage systems of India are generally recognised:

The rivers originating from the Himalayas consist of the following three systems: Indus Drainage System is system comprises of the Indus river and its five main tributaries–the Jhelum, the Chenab, the Ravi, the Beas and the Sutlej.

The Indus originates from a glacier near Bokhar Chu 31°15´N latitude and 81°40´E longitude in Tibetan region at an altitude of 4164 m in Kailash Mountain range. In Tibet it is known ‘Singi Khamban’ or Lion’s mouth. It flows west and north-westwards and enters Indian territory in Jammu and Kashmir. The river forming a spectacular gorge in this reach pierces the Kailash range several times. It flows through Ladakh, Baltistan and Gilgit. The Indus receives a large number of the Himalayan tributaries, both on its right and lebank. The main tributaries are the Shyok, the Gilgit, the Zaskar, the Hunza, the Nubara, the Shigar etc. It finally emerges out of the hills at Attock where it receives the Kabul river on its right bank. The other important tributaries joining the right bank are the Khurram, the Tochi, the Gomal, the Viboa and the Sangar.

All these tributaries originate in the Sulaiman range. The river flows south-ward and receives Punjnad a little above  Mithankot. Punjnad is the name given to rivers of Punjab namely the Jhelum, the Chenab, the Ravi, the Beas and the Sutlej. It ally discharges in the Arabian Sea east of Karachi. The Indus flows in India through Jammu and Kashmir only. With a total length of 2,880 kilometres, the Indus is considered as one of the largest rivers of the world. It has a catchment area of 1,165,000 sq. km of which only 321,290 sq. km lies within India. India can utilise a total amount of 4,195 million cubic metres (only 20 per cent) out of its total discharge under the regulations of the Indus Water Treaty signed with Pakistan.

It rises in a spring at Verinag situated in the south-eastern part of the Vale of Kashmir. It flows northwards from its source to Wular Lake and further down south-westwards until it enters a gorge cut by this river in the Pir Panjal Range. It turns to the north-west below Uri and to the south below Muzarabad and continues until Mangla is reached. Between Muzarabad and Mangla, it runs roughly along the Indo-Pakistan border. It joins the Chenab near Jhang in Pakistan.

The Chenab of Jammu and Kashmir state is known as the Chandrabhaga in Himachal Pradesh. Chandrabhaga flows north-westwards and runs parallel to the Pir Panjal Range for some distance. Near Kishtwar, it cuts a deep gorge in the Pir Panjal Range and turns southwards and flows in this direction for a short distance. Further down, it turns to the west and enters the plain area near Akhunur.

The source of this river lies near the Rohtang Pass. It flows to the north-west from its place of origin and drains the area lying between the south-eastern part of the Pir Panjal Range and the Dhaoladhar Range. Some distance below Chamba, it turns to the south-west, cuts a gorge in the Dhaoladhar Range and enters the Punjab Plain near Madhopur. It being a part of Indo-Pakistan boundary, the river has some strategic significance. It joins the Chenab near Multan in Pakistan. Its total length is 720 km.

It originates from a place known as Beas Kund, near the Rohtang Pass. In its early stage, it runs from north to south past Manali and Kulu where its valley is popularly known as the Kulu Valley. It crosses the Dhaoladhar Range through a deep gorge. Further down, it turns to the west and enters the Punjab Plain near Talwara. After entering the plain, it turns to the south-west and joins the Satluj near Harike after wing for a distance of 615 km.

It originates from Rakas Lake which is situated at an altitude of 4,630 metres in Tibet. This lake is connected with Manasarowar Lake by a stream. It follows north-westwards and enters Himachal Pradesh at the Shipki La Pass. Further down, it flows westwards. It cuts deep gorges where it pierces the Himalayan ranges. Before entering the Punjab Plains, it cuts a deep gorge where Bhakhra Dam has been constructed. Below Roopnagar (Rupar), it turns to the west. Beas, its right-bank tributary, joins it at Harike. Its total length is 1,440 kms. During its onward journey it receives the collective water of the Ravi, Chenab and Jhelum rivers and joins the Indus a few kilometres above Mithankot in Pakistan.